Sienna needs good weapons, a 2 hand sword or a mace that actually does damge and swords that actually do damage, not bounce against enemies,
weapon that kill hordes and do damage to armored enemies, like the Executioner sword or the glaive or the 2h axe for dwarf

Most of Sienna’s waveclear comes from her ranged, so Pyro and BW mostly use Crowbill to deal with elites, 1h mace is also a versatile option, if playing unchained 1h sword or flamesword work well and have nice anti armor from things like LMB 3 (I believe) which is an easy headshot for pesky SVs.

When I leveld up my Sienna, I used the 1h sword a lot because the heavy attack works nicely against waves.
With the crowbill you can get rid of elites and it works well against waves either.

The mace is also quite ok.

No thanks. Ranger needs new ranged weapons, only has two whereas rest has at least 3…

You mean, viable weapons? Ranger had crossbow, handgun and grudgeraker, and nojne of these works good vs bosses, that’s his first problem. His second problem is, his THP generation works best with hammers…
…that are mediocre vs bosses (you need heavy spam unless you’re using super slow 2h hammer that also isn’t great).
His 3rd problem is lack of powerful offensive talents, other than ranged dmg boost during ult (when going melee makes usually more sense anyway) - this one has long cooldown anyway.

To sum it up - ranger needs new ranged weapons with boss-hurting ability and he needs talent redesign, right now he’s the only utility class in game, too bad this utility is heavily rng based and if you go for it, you’re losing your ammo sustain (you go from 30% ammo per special to 7,5% ammo per special since you have 25% chance to get bomb/potion). And this is bad, cause grudgeraker spam is IMO the only reason to play ranger anyway. 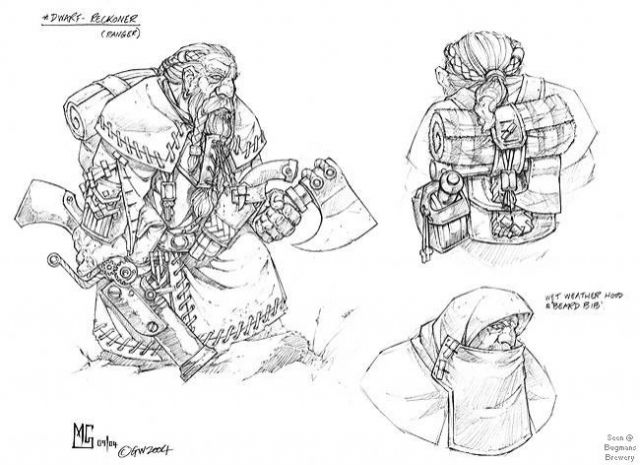 Rangers are the long-ranged eyes and ears of most Dwarf settlements. They patrol far from the safety of the hold, often spending long periods out in the wilderness, keeping watch on the Dwarfs’ many enemies and tracking dangerous beasts. It is the...

“throwing axes for close ranged slaying while on the move”

Yeah… I didn’t want this 10 minutes ago but I now really badly want this. The Throwing Axes, that is.

However, more to the point: @Revy really nails it for Sienna’s weapon combos. Her kit has never been entirely reliant on her melee weapons as her staff is so outrageously effective. This being said, it means her melee weapons tend to be catch-alls that aren’t super effective in any one field (unless the crowbill is applied righteously to some Storm-Vermin’s forehead).

This being said, she does have a 2-handed mace, but it might not be your favorite weapon by the sounds of it. However, thematically, it would be hard to justify a Bright-Wizard (other than Unchained, maybe) hauling around an enormous greatsword. Maybe that’s personal opinion, but it seems a little off.