why does this game need rtx generation and 3000 series to achieve at least 60 fps on medium graphics quality?? Even Call of Duty Modern warfare II just needs gtx 1080 at 60 fps on same graphics settings or better. Not to start talking about CPU model.

I feel compelled to notify you that their 60 fps isn’t even guaranteed. As someone who uses a 3060 Ti card, the kind of performance you’ll be getting out of this isn’t good. Here’s an fps benchmark I performed on the game with lowest setttings: 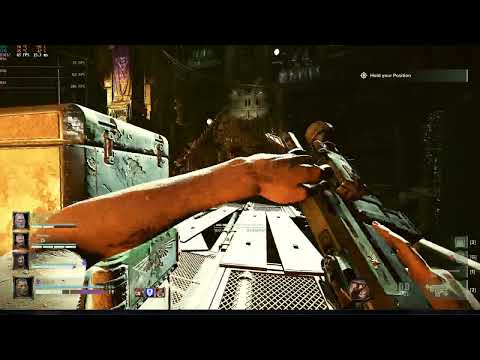 It will only get better as more things become optimised

yeah i know im just saying that the requirement for a game that needs that powerful of a GPU in order to claim that 60 fps can be reach on medium graphics setting is absurd. This is basically a VR gaming graphics requirement.

The low settings look fine, so this isn’t a huge deal. The only thing you really miss out on is localised enemy damage, which sucks, but it isn’t the end of the world.

Super high-quality graphics in videogames have mostly just been there for screenshots and trailers anyway. You normally don’t notice it when actually playing.

Why exactly did fatshark partner with nvidia in the first place when everyone has bad performance now?

In the log files I can see that the game recognizes that my AMD RX 6700 is capable of using raytracing 1.1 but I’m not allowed to even use it because nvidia.

Maybe the performance is magically gonna improve when nvidia determined they sold enough RTX 4000 cards with those new features.

Game is over the top and convoluted, like 20 separate parts for a floor tile? is that really a good use of GPU? or a single NPC having 20+ active moving parts?
they got amazing hardware from the bank and went all out in a bad way…doubt they can play this game on their own home PCs, change min requirements borders on False advertising. unless you like potential legal issues, or standing before a Gov sub committee

I get a comparable performance on Ryzen 1800x (apparently below the minimum CPU requirement) and NVIDIA 1080Ti, with maybe slightly less frequent fps drops.

Wait till you find out that the game seems to run almost exclusively on the CPU rather than the GPU.

idk i checked with the task manager and the game utilizes basically 100%. prob bad optimization on shaders cuz i can see some of them losing texture and flicks black squares at times

This game needs a good CPU. I was playing it with a 2080ti and an older i7 quad - could only do 1080p really. I have a new comp that can play this game at 4k 120hz on my OLED TV and its absolutely the most “next gen” thing I have ever seen. More impressive than Doom.

They stated in one of the community updates that compatibility and optimizing isn’t done yet, and it’s still technically a beta. I see alot of framerate drop when it gets hectic, and thats with a 3090ti, so seems more cpu work needs to be done which will in turn help keep your gpus fed.

Turning your graphics down will also only increase your cpu bottleneck, causing more problems, so your better off going with default settings it applies. If anything, turn down raytracing and lock the framerate to one of the preselected options.

Task manager saying your gpu is being 100% utilized doesn’t mean much. Look for something like MSI afterburner or likewise to tell you whats truly going on with your gpu. Windows will tell you your GPU is at 100% when really your GPU is just waking up the 3d engine.

The reason you can’t get 60 fps is because the kernel level anti-cheat is mining bitcoin while stealing your data!

my 980 is running the game fine

no it isn’t lol