You know what grind my gears ? Getting a nearly godroll on a kantrael MGXII on my zealot but can’t even have a grey one in shop for my sharpshooter… 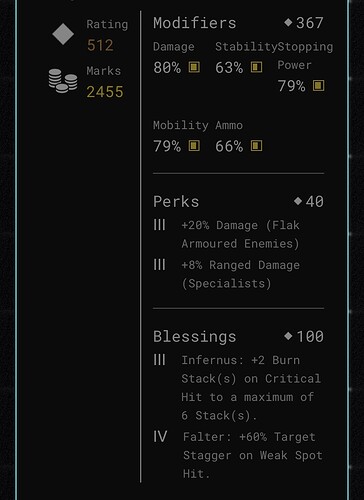 Account wide shop and marks would be nice too.

I normally wouldn’t too, but this specific roll made me wonder why would I bother “Farming” the same weapon on 2 of my account chars. Especially when the one for who I got it don’t “need” it…

Yes, no exclusive weapons, money, marks and materials should be shared.

To keep you playing even longer! Aren’t Fatshark smart?

Well the thing is that in V2 you can craft any weapon you want, in DT you can’t see desirable gun in the shop for days cause of rng. Considering this, cross class weapon should be shared.

The counterpoint is that if weapons were account wide, then it becomes optimal to level 5x your favorite class to get 5x the chance to feed the best items to the one you actually play.

Or it should be fixed in a different manner, with for example having a order system, which would let you order select weapon that would be kept from the store even after the hour pass that way you increase the number of weapon of a certain type that you want that are available to you

How is that a counter point?

Just check again the shop. 2 MGXII on my zealot, none on sharpshooter.

It becomes a meme at this point…

Because it results in a tedious optimal strategy. I would much prefer they fix the loot acquisition/progression properly.

Optimal in what world ? Having to lvl up many exact same chars would be a chore…

The counterpoint is that if weapons were account wide, then it becomes optimal to level 5x your favorite class to get 5x the chance to feed the best items to the one you actually play.

That would just be a massive garbage system though.
Independent of items being acc wide or character bound.

I still legit don’t understand why is that bad. Say I want a good Revolver for all three of my characters to use, why is it horrible if I play for example Zealot, to get it for Vet and Psyker?

So, I would much rather see a system where resources can be meaningfully spent on upgrading your items and making them better than a system where you can trade items between characters.

By optimal I only mean optimal for getting the best chance of good loot. I’m saying it would be a bad system though, part of good game design is making sure the optimal strategy is also fun.

I know what you meant but honestly, most of the « max weapon seekers » wouldn’t bother to do it IMO…