I have had a permanent FPS drop of 30 FPS after turning vsync ON and then OFF.
I installed Vermintide 2 yesterday did the following:

I was getting 90-100 FPS in the intro and first level I played with whatever setting I applied (assuming they were actually set to Extreme, it looked like extreme).

I then tried testing to see if it would run smoother on vsync, and that set the FPS to 30. I turned it off, and now the FPS stays around 60, but drops to 45 frequently. Temps are fine on CPU and GPU. I could not get it to go back to 90 FPS, even with doing a clean uninstall.

Has anyone else had this issue?

I’m assuming you’ve restarted your PC since reverting these changes, and the performance issues persist?

I’ve also noticed a drop in frame rates of roughly 20-30 fps since the beta. Changing V-sync settings didn’t change anything. I have my graphics at mostly extreme in fullscreen mode in 2k resolution.

Sun shadows looks like the problem. After reading about it from some post on this forum, I turned them off and got 15-20 FPS back. Even on the lowest setting drops me roughly 15 FPS.

Texture settings is the main issue on my rig. If I turn it to high settings I get unplayable stutterfest. Everything set to lowest just textures to high. If I put it to low or medium it’s “ok”.

Texture settings is the main issue on my rig. If I turn it to high settings I get unplayable stutterfest.

If OC’d 11GB on 1080Ti is not enough then VT2 is sure using some interesting format of the textures that could use some optimizations ; 0

And there was issue with stutter forever, just not like this, this is just absurd and completely unplayable. Not just me being performance snob complaining about frametime spikes. 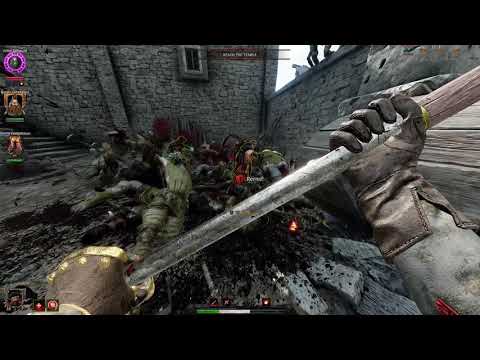 Ah interesting I also happens to have spikes of slow regularly while playing. I did overheat a little so reapplying thermal paste on gpu did half of the trick, but still, when I play for too long, it heats a lot.
Will try to lower textures. (I mean, I tried lowering everything else in order to have some kind of result)

This is not overheating issue, they broke something.

And aside from the texture problem, before I deleted the whole settings folder I was doing basically -60 to -70% performance for some reason. Was getting 80 fps in keep @ 800x600 resolution

This is the only game where I am literally at over 500 hours of just tweaking it for performance… and then patch hits and boom it’s fu*ked again in some novel way.

On my end there also was overheating, so I tried to fix that before trying stuff =p

Im running Dx12 with mostly high settings (+ all cpu dependend settings off or lowest) and i coundnt rly see a difference, just with the introduction of beastmen back in 2.0 but in general my performance is at the same level. Im also running a quite old GPU driver so maybe thats a factor. My fps just dip under 100 in a very few cases (mostly in some modded difficulties) but all in all the game feels “smooth” in terms of frametimes (ofc for vt conditions)

And even before, people say it’s fine, but it wasn’t if you looked at frametime graph with proper resolution, even non-super sensitive people could see that there is random stutter and some maps were super horrible while some were kinda ok.

For example I think like Hunger was no issue, but Empire in Flames, stutterfest in my view.

But hey, I’m “sensitive” to this so I can see many people didn’t really care, which is prolly why devs didn’t give a crap either.

I just gave up at one point, because there was nothing else I could do, that’s something devs would have to fix.

The loading textures, spawning units or whatever was causing that stutter. (i could notice 100% easily patrol spawning just by the stutter it caused) Also it felt like game is dropping textures you are not currently lookin at and then loading them again or something, because, in some areas quickly looking on one side and back was causing weird stutter also.

just saying, something got screwed rly hard in this last patch.

I tried this too.
Had initially around 50-60 FPS in the keep. Removed all shadows, it got up to 100-110 for about 20-30 sec and then fell back to the original.
The keep is certainly a very bad spot in the game to check FPS.
Then I played a few games, and where I usually had 60-70 FPS, I now constantly had 100 or above.
I cannot accept this “we’re looking into it”.
It’s blatantly obvious that something was done, as the performance / FPS drop problem showed up when the WoM beta was released and it still persist.
Acting surprised, like this showed up out of nowhere cannot be taken seriously.

I cannot accept this “we’re looking into it”.

You mean, you don’t want the bug to be fixed ?

Sounds like the old FPS bug everyone was getting. Do you get screen freezes on DX12? The only solution I could find was using DX11 but then you’d still get FPS drops during hordes. The bug would show up during a patch then disappear on its own a few patches later. Happened to me and all my mates at different patches during the games life. What was weird was that my wife got it during the summer solstice patch, my mate got it during the orkri challenges patch and I got it during the Bögenhafen patch…

Yeah I do read minds a lot ! You’re now thinking “What a dumbass he is !” even if I don’t know who you’re targeting with that thought !

There isnt much difference between DX11 and 12. My screen hasnt froze yet.