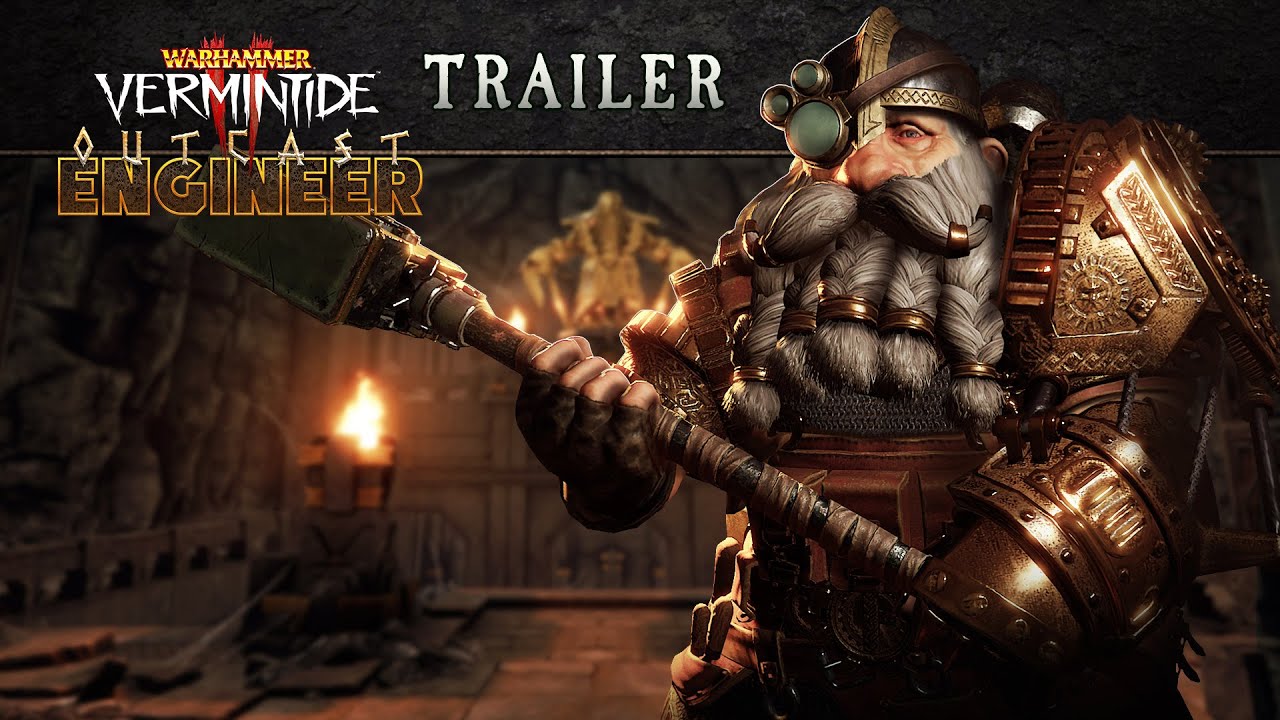 Together with the release of the new career we are also releasing update 3.4 for PC. An FAQ and a full list of Patch Notes can be found below.

The Outcast Engineer might not be an Engineers Guild graduate, but no less lethal - armed as he is with an array of experimental weaponry. His unmatched use of heavy machinery together with his assorted gadgets makes him a master of utility, blasting down anything, or anyone, in his path. 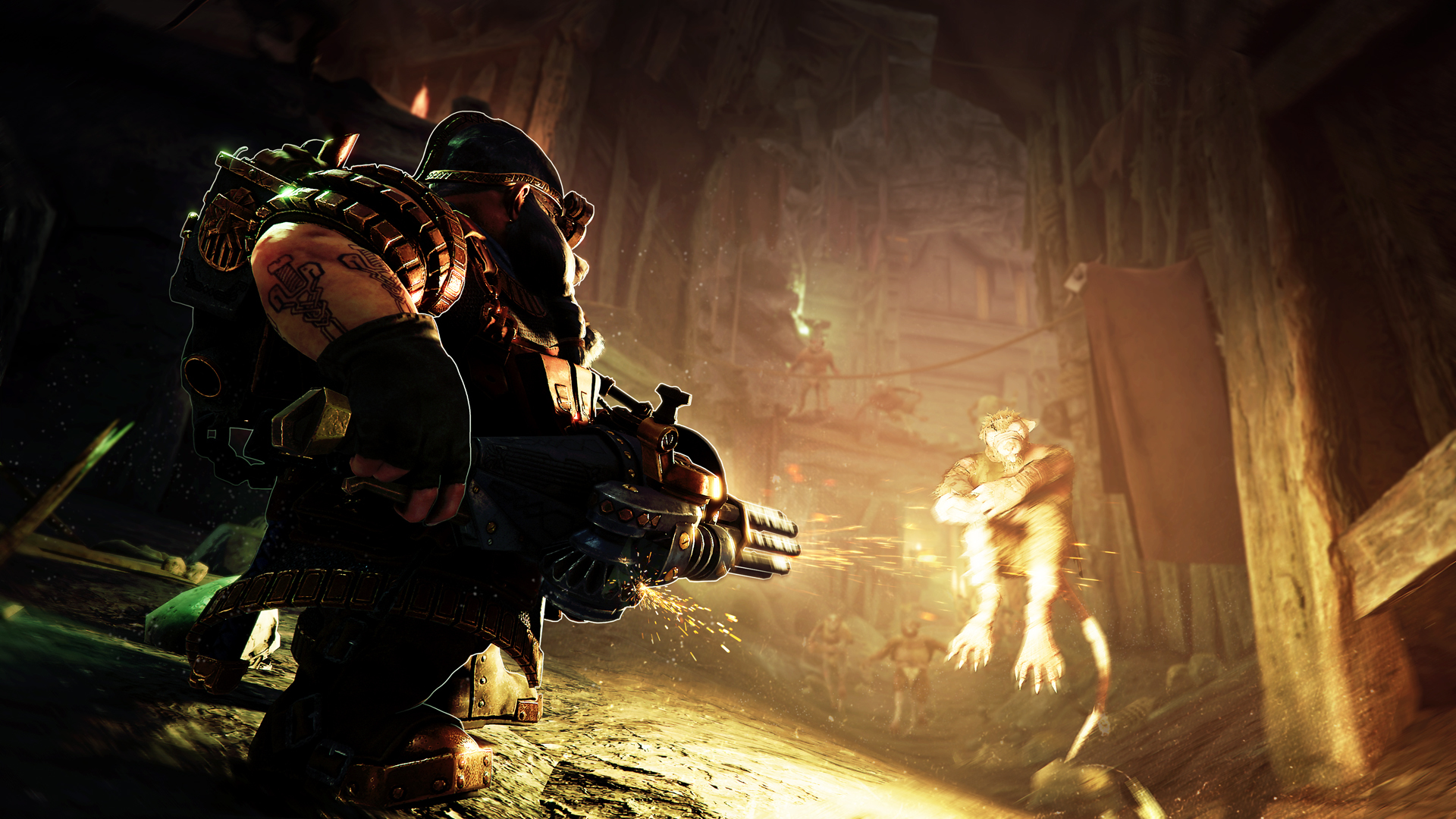 If you want to find out more about how, and why, Bardin Goreksson ended up as an Outcast Engineer, you can read the full story by clicking here.

Q: Why did you make the Cosmetic Upgrade?
A: We wanted as many players as possible to have the option of the Outcast Engineer in their roster of hero careers. Offering a much cheaper ‘gameplay’ option, and a very much optional Cosmetic version allows for the gameplay portion to be as accessible as possible, whilst providing Cosmetic options via the upgrade to those who really dig a new hat !

Bardin will subsequently equip a customised Gatling Gun with high rate of fire. It can only be shot if the ability bar is available, and shots will consume the ability bar. It must be spun up briefly before it can be shot and will start to shoot at a steady pace before increasing in momentum. Holding the right mouse button will allow you to keep spinning without shooting. To regain ability bar you must press and hold the reload (otherwise known as ‘cranking’) button to build pressure. As pressure (visualised as a stacking buff) builds, the ability bar will replenish over time. Bardin will continue to replenish the ability bar as long as stacks of pressure have been built-up, and is able to use other weapons. Firing the Crank Gun will result in it losing all of its built-up pressure.

When purchasing Warhammer: Vermintide 2 - Outcast Engineer Career, you will receive 100 Shillings (in-game currency) to spend in the in-game store.

Only available in the Outcast Engineer bundle*

With the Cosmetic Upgrade, you receive a new Hero Skin Color Variation, a new Masterwork Pistol Illusion, a new Cog Hammer Illusion from the start, and access to unlockable cosmetics for your Outcast Engineer.

When purchasing Warhammer: Vermintide 2 - Outcast Engineer Content Update, you will receive 225 Shillings (in-game currency) to spend in the in-game store.

Woah! Did not expect this to be out already!
Just made dinner, now I can’t decide if I want to eat or play Brrrrrrrrrdin first.

Stealth-Dropping engineer with gattling gun? That’s what the wutelig wut do!

Heleborgs Tutelage - No longer gains multiple stacks when shield/blunderbuss bashing into a horde.

Yoooooo no more blunder bash Merc shenanigans. Weird this is getting patched now but ok.

Smite Volley bow Zealots beware! You may be next on the list!

That’s a lot of fixes. I hope the game didn’t break.

There are a few threads about this. If you have Improved bots mod installed, try uninstalling it or disabling the bot tagging function in the mod menu (F4).

Wrote it in another thread already but I think the patch notes are missing:

Oof.
This is a nice surprise!
Always figured Bardin would get either a Runesmith or Engineer, and I’m curious to see how this plays.
Though, knowing how those things usually go, I wouldn’t be able to play him because everyone wants to. ^^

What has been changed regarding the killfeed?

It shows what has killed the characters / player including friendly fire

Incaps too. Probably just to help players tell what’s going on in the moment, but my wishful brain wants it to be some kind of Versus preparation

They got one, just noticed it. Smokier. But yea, the Patch Noter has missed some of the Notes

I would consider them an obvious surprise but yea. Maybe some stuff is missing on purpose just for players to notice like “Wow. Nice one.” ?