Noone joining in Cata bots suck

Yep, sadly there is few people and bots are bad as always.

I can only speak from my personal experience: all my vt2 steam friends play in premade groups and i do the same. The few games i did in random pubs were frustrating. usualy it took me 4-5 runs to find 1-2 “competent” players.

not sure that gitgud qualify as carrying beginners

and anyways, where’s the fun in that…

I’ve resorted to holding W in legend and letting the bots kill everything.

Yeah Cata with bots is a big ball of frustration. Dealing with most of the threats yourself would be ok if they didn’t randomly do really dumb stuff like run into storms or fail to reposition with you, or frequently fail to get you back up. Even with barkskin, Merc bot and UC bot pumping them full of temp health they still get downed very easily once there are enough threats on the field at once (their ai seems to completely lose the plot in high pressure scenarios). Can’t seem to find a setup for them that makes them not throw Cata runs frequently.

It’s more frustrating that you can tryhard to the end events and then they’ll wipe themselves there.

Yesterday I watched all 3 bots walk into a flamethrower rat until they died, and then closed the game.

Bots are frustratingly inconsistent. I’ve had my IB bot solo 6 CWs at the first event on Righteous Stand and then revive me, and then I’ve had bots that switch to their range and walk into an overhead. I’ve even had them run away from me while I’m down and leave me to die of all things.

If IB bot didn’t fail to revive while ult was active he’d be the best one, but because of that very fun feature UC is probably the best overall bot from my perspective, mainly because of the Abandon talent.

If anyone is in Au and interested in Official Realm Cata/Cata FoW/modded (DWONC3) feel free to message me for a game. Steam name on profile.

I tried playing with lag yesterday, and was getting hit while spamming Mace and Shield Lights on GK. Horrible experience. lol

it would be nice if fatshark could at least fix the bugs and change up some priorities for the bots like how they focus on monster when there is a horde around too, then they die and cause a wipe or how they absolutely have to chase specials.

the usage of ults could get looked at too. footknight bot can actually be one of the best bots if he actually used his ult well. if he used his ult on chaos warrior(s), a group of elites, specials and disabled allies (saving them from a chaos spawn grab) then that would have been a huge improvement.

honostly.
something fatshark could do is to engage with the modding community and arrange a competition with the steam moderators and reddit mods where people can make improvements mods to the bots that they would like in the game. people could vote on their favorite bot mods (that arent sanctioned) and when the competition was over (maybe it could last a month or something) then fatshark would sanction the top 3 or top 5 mods that was made.

Just started up a Cata Righteous Stand with bots. Got a Chaos Patrol right off the bat. Pulled bots as far out of the way as possible. Gas rat turns up in the vague vicinity of the patrol and bots instantly rush it and aggro the Chaos Patrol right as a horde comes then they immediately separate from me and all get wiped…

They completely separate from you when a storm gets anywhere near you then immediately down under pressure. They won’t snipe specials almost at all under very normal amounts of pressure for Cata, but they also won’t frontline for you properly at all so unless you’re playing a class that can clutch alright when you’re last one standing you’re pretty much s#!t out of luck trying to get anywhere with them.

Yeah I’m so effing done with the bot AI.

Got a Chaos Patrol right off the bat. Pulled bots as far out of the way as possible. Gas rat turns up in the vague vicinity of the patrol and bots instantly rush it and aggro the Chaos Patrol right as a horde comes then they immediately separate from me and all get wiped…

Yup, bots are aburdly dumb. It’d be nice if they could listen to something like player commands.
Posting because same thing just happened and I think should be shown. Keep in mind the bot didn’t even try to shoot the special despite having 80% ammo. 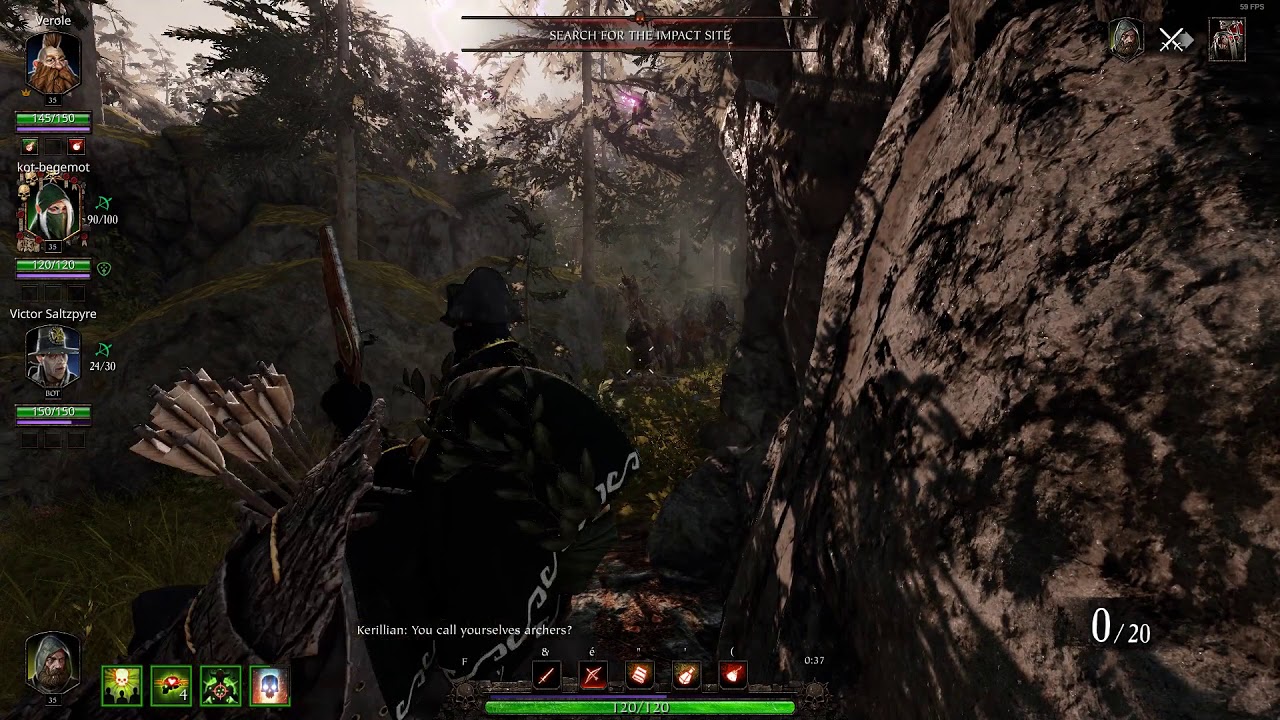 There really needs to be an action wheel for bots, similar to csgo.

Yesterday I watched all 3 bots walk into a flamethrower rat until they died, and then closed the game.

I made it to the end of Cata Enchanter’s Lair with bots and for whatever reason, they all got stuck with their ranged weapons out and died to the first horde spawn in the lord arena. I, too, also got frustrated and closed the game.

It almost feels like Fatshark designed them to fail on purpose…

You have to say “thank you <3” to them every couple minutes. They need to feel appreciated, it’s the same in quickplay. A thank you voice command goes a long way :).

My usual approach is to yell “WOW!” when they kill a disabler before it does it’s attack, and then stare at them for a minute or two to see if they’re ok.

You have to say “thank you <3” to them every couple minutes. They need to feel appreciated, it’s the same in quickplay. A thank you voice command goes a long way :).

Pick this up OMG PICK THIS UP

I’ve heard people claim that the “come here” commands works but am unsure myself from the few times I’ve remembered to try it before the bots are already dead.