So the idea here is that, while Kruber is no Engineer, he does have experience with explosives. It’s even mentioned in dialogue concerning bomb whiffs; Kruber will talk about the proper throwing technique and Saltzpyre will comment that he (Kruber) should know.

While Grenadiers obviously bring to mind guys with, well, grenades, historically they were also big strong men; the shock troopers of their day. So the career would have a focus on explosives, but not be bad in melee. I imagine it as having 125 health, not being as bruisery as Merc or Foot Knight.

Protective Gear - Grenadier takes reduced damage from AoE attacks, and also has an aura that reduces the AoE damage that allies take. Unlike the relatively small general damage resistance from Foot Knight, this could be higher, like 30%, just limited to AoE.

Explosive Rounds - On critical ranged attacks, Kruber’s shots explode, creating a small burst of damage and stagger around the point of impact(comparable to first charged attack from Fire Flail). On Grenade Launcher crits this can simply add more damage.
This could be absolutely devastating on Blunderbuss, but the career could just have no crit improvement mods natively, meaning that (besides WHC’s ult) he can only stack 15% crit at most.

Career-Specific Weapon: Grenade Launcher. Due to his Ordinance Training passive, this solves the issue of friendly fire with the weapon. I imagine each shot as being fairly powerful, but not as powerful as a bomb. They have no headshot multiplier, but can crit. A long reload, at least on par with handgun. Would be great to fire at bosses, massed Elites, or hyper-dense hordes.

If you wanted a career-specific melee weapon, you could use a linstock, though I feel like it’d be very similar to his Tuskgor Spear.

As for career ability, I’m really torn here. My heart is screaming: HELLSTORM ROCKET BARRAGE, that would work similarly to the Arrow Storm in For Honor.
It’s hard to make sense of that, though. Who are firing these Hellstorm Rockets? How would they work inside or underground?
Yet it would be awesome to see Kruber point and yell out something like “Rain down hell!” and see a buncha enemies consumed in a barrage of rockets.

A more . . . logic-friendly ult would probably be something like throwing out mines that incoming enemies can set off, or throwing out some small flash bombs or something.

As for how he looks; he could have the coat of an engineer, would kind of make sense as protection:
https://vignette.wikia.nocookie.net/warhammerfb/images/c/c6/Grenade_Launching_Blunderbuss.png/revision/latest?cb=20171022224014

Most historical artillerymen of a similar era wouldn’t be that distinctive from other soldiers, so the engineer’s coat might be well-fitting.

So the idea here is that, while Kruber is no Engineer, he does have experience with explosives. It’s even mentioned in dialogue concerning bomb whiffs; Kruber will talk about the proper throwing technique and Saltzpyre will comment that he (Kruber) should know.

But but…when he himself misses, and Kerrillian makes fun of him for it…he proclaims “I’m not a bombardier…,”

Right, he’d be a GRENADIER! A bombardier operates a bombard, a type of artillery!

But this would be an alternate career, they could just take out that line specifically when you’re playing the Grenadier career, lol.

I love the idea…but then what’s his reply to Kerrillian when he wiffs again?

Mate, do i got something for you. 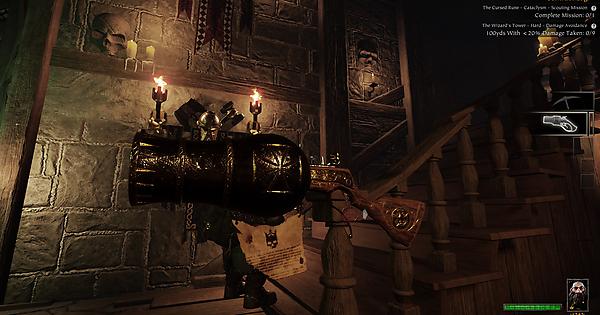 Old but gold, from back in the day, Iamlupo found it.

Oh, I know, I remember when that was datamined! Bounty Hunter’s double-barrel pistol was also found in there, as I recall!

One reason I think this career idea would be perfect; I think FS said they were worried about friendly fire damage from the grenade launcher. I figured with Grenadier’s Ordinance Training (for those who don’t know, no-ff was a trinket trait in VT1, and near-mandatory if you ever wanted to bomb), it’d solve that issue!

I actually really like this idea. This is more creative than most other career ideas (mine included). It might be a little “gimmicky”, but so is Shade and that’s one of the most popular careers in the game. Currently Bardin is the closest thing we have to a bombardier character.