Just like the title says. Hope this helps people find this. 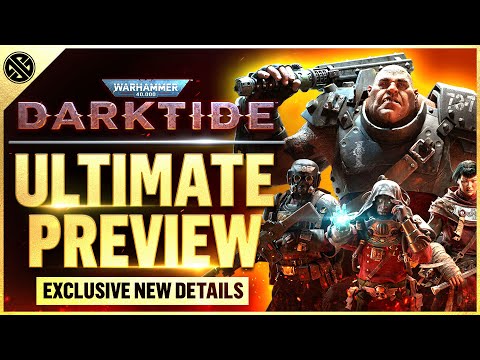 Thanks for linking, but I didn’t notice anything new compared to the videos from a couple weeks ago.

Also, what does this even mean?

For the first time in the Fatshark 40K games, there will also be randomized stats associated with specific weapons.

In a lot of the video he’s comparing and contrasting things with Vermintide, but this sounds like exactly how loot RNG worked in VT2 so that sentence just utterly confuses me. Even the “first time in the Fatshark 40K games” part just doesn’t make sense.

The only thing that comes tomind when i hear randomized stats is…Borderlands Guns? I very well could be WAY off but that comes to mind.

Also sorry for the old info. The mission board offering a random selection of missions and the removal of “custom games” was news to me

This was mentioned in the Interview with the Level Design Lead whose name escapes me. If you have the Armory mod (or look up the out-of-game version) you’ll see that, for instance, Kruber’s handgun does a baseline of 71.75 damage per shot. It doesn’t matter what fancy skin you slap on it, or what color it is -grey to red- it does 71.75 damage per shot. Of course, Kruber’s total power level matters (the mod assumes max power) and you can nudge it around using the properties but the inherent strength of the gun is the same.

What they are talking about doing, is changing this system so that all weapons will come within a range. So instead of the single value of 71.75 we might see anything from 50 to 93.5 per shot. You get a new handgun and it does 62.25 per shot. This particular handgun will always do that much damage per shot (and maybe we can nudge it a bit in the crafting), so if you want a better one, you have to keep hunting those relic-level items to get max rolls in all categories from damage to mag size to total ammo, reload speed, etc.

It feels like a way to stretch the weapon grind out further which I don’t really think is necessary. VT2 already took a bit to get all reds. But maybe it will help to flesh out the end-game experience. The ‘contract’ system they mention might also help a lot with it, we’ll have to see.

It also seems like a way to cut down on the “Verminscience” aspect where hardcore folks calculate out breakpoints and other such minutiae. It’ll still be there but it looks like it’ll have to be on a personalized basis.

I think this is still the best single video source of all the info, so thanks for sharing it

@deusvult6
That makes a lot more sense, so less RNG of properties system like Vermintide 2 and more RNG of the intrinsic values of the weapons

What they are talking about doing, is changing this system so that all weapons will come within a range. So instead of the single value of 71.75 we might see anything from 50 to 93.5 per shot. You get a new handgun and it does 62.25 per shot. This particular handgun will always do that much damage per shot (and maybe we can nudge it a bit in the crafting), so if you want a better one, you have to keep hunting those relic-level items to get max rolls in all categories from damage to mag size to total ammo, reload speed, etc.

That sounds HORRIBLE. I’d hope of they learned anything from V2 it’s how tedious and unnecessary the loot grind already was. If they actually increase grind in Darkside that’s… a huge deterrent for a lot of people I’m sure.

If its like this it sounds extremely like the loot system in Borderlands or the newer ubisoft games like ghost recon breakpoint, the division or assassins creed odyssey.
There is almost no loot system I detest more than getting extremely minor upgrades in very short intervals increasing inventory management by large amounts.

Please god no this’d make me rage. Took me almost 2k hours to get red skin for greatsword. If i have to grind for red skin AND high damage itll be world class trolling by Fatshark.

Like I said, they mention a contract system which sounds a lot like DRG’s assignment system but the payout is a specific weapon that you want. We’ll have to wait and see what it’s actually all about of course.

the contract system is the thing im most curious about, i mean the implementation needs to be done well, the whole game could flop based on this feature alone.

i’ve heard somewhere that they want players to take missions on all difficulty ranges, that alone made me think, alot of people play Vtide not for progress but rather the fun of challanging themeselfs, can they make a system like that, engaging for sweatlords like us? honestly i can’t see a world where i want to play champion and below even if i would get 10 chest…

Aaaand my buzz for this game just took a hit.

Come to think of it, if DRG assignments made me play on Hazard 1 (which I have never played on) I’d probably be a lot less keen on them. The regular Deep Dives are already almost snooze fests at 3-4.

Hopefully, they rethink that aspect a bit. I guess I can get the thought behind it. You know, trying to mix up the community so we don’t coalesce into “Legend” players and “Cata” players and such but go down and play with the noobs every so often. But that could be really boring, swatting zombies on easy mode, and entertainment of any kind should avoid that even more than the Zombie Plague.

It also suggests that low-level players will need to complete higher difficulties than they are comfortable with which will encourage an even greater degree of backpack gaming (getting carried) than already exists in VT2. And that just sounds like no fun for anyone at that point. Pissed off teammates vote-kicking them (if that’s even an option), them going on Reddit to whine about the “toxic” playerbase, and nobody getting the weapon that they want.

Another thing that occurs to me is that contracts might be designed to break up player groups and have you play with randoms. After all, if everyone in your 4-group of friends takes a contract, and they’re all different, you’d have to run 4 times the missions to get everyone done, or you could split off and do it alone more efficiently. Maybe the contract system should have it’s own thread, but I guess we don’t know much about it yet. Hopefully, it gets a mention in the crafting devblog or its own in the next couple of weeks.

I think it was said outright that it was going to be similar to Destiny 2, where the situation of the hive changes over time. We don’t know to what degree yet, of course, but I’m not a big fan of limited time content. Games should not have to be chores.

according to the german gamestar:

“the game will have 11-12 missions at launch”
“opposing to V2, darktide will not have bot-support, if you play a mission alone you gonna be alone with no bots”
“only when a player drops out, a bot will take over”.
“there will be 4 graphical settings, visually distinctive areas”.

Just saw the new gameplay video on Gamestar and i am hyped up. That Chainsaw-Lasgun gameplay was glorious. I hope that weapon combo is viable enough to deal with all the threats properly.

Enemy variety is meh, looks like zombies for trash, ogryns as elites and that nurgle friend as monster. Would certainly like to see more, but i am fine with just them at the beginning. I do hope for at least another race eventually and Chaos Space Marines should be a given at some point.

But for starters it looks very nice and i am looking forward to playing the game.