I’ve been playing Kerillian for quite a while and mostly shade (for boss killing on legend) and I thought about how her Waywatcher skins are a bit underwhelming. Meaning no offense of course, I’m sure there are people who love them - and that Loki helmet is amazing.

Just thought I’d throw it out there, as cosmetics are half of the drive that keeps me playing every day. 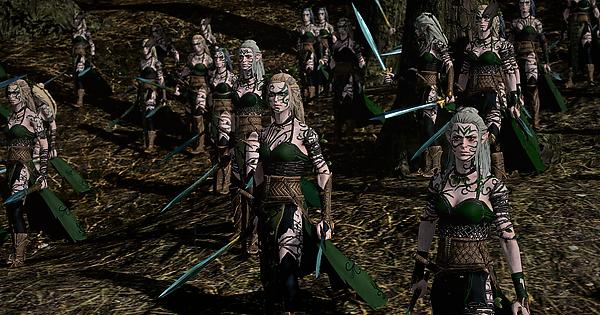 Yeah, but then you remember that Kerillian is on like 6 or 7 layers of insecurity and is apparently allergic to showing more than 2% of her skin at any given time, so the chances of her walking around like this are slimmer than an Ogre being added to the game.

It’s funny how differently people can view cosmetics; I find her Waywatcher skin (not the Waystalker gear of VT2, her legacy skin from VT1) to be absolutely rad. The white fur, wooden armor, and gold trim makes her look like a proper warrior as opposed to a dainty-little Wood Elf.

I do also agree that the Wardancers look awesome; that’s why I’ve played my Wood-Elven army ever since I was a kid! I agree with @LordRhinark, though, I think she wouldn’t show more skin if she didn’t have to.

Ah, another kerillian player. I would say you’re a man of cultural as well… but you play the shade. #disappointed

The V1 Waystalker skin is amazing. I bought the first game just to get it lol.

And yea, waystalkers literally spend dozens/hundreds of years alone in the forest just talking to tree’s. If I remember correctly, some don’t even communicate via speech, but rather though the wind and other weird stuff. They’re extremely solitary and I don’t blame her for covering herself up. Not to mention, an Elf walking through human towns would draw lots of attention. Most likely dressed like that to keep attention off her.

I spent about half my levels as handmaiden and waygirl.

Shade is something I do because watching a party try to deal with a boss in legend for 3 minutes while also falling to disablers and swarm is not as fun as just killing the boss outright and moving on. So many other players have crap single target damage because they want green circles for killing the most and doing the most damage.

As for lore reasons, I think we threw that out the window by making Kerillian a shade.

Meanwhile she has several colored socks she puts over her head. It’ll never get old hearing people be like “ooh I unlocked a new hat for kerillian… oh. ew.”

So many other players have crap single target damage because they want green circles for killing the most and doing the most damage.

that rarely ever happens. Maybe monster damage, but many people are obsessed to the point they’ll run ahead blindly swinging at rats while you’re pinging for them to pick up the tome. Then they get destroyed and immediately leave the game. This crap used to be only in Champion, but now I’m seeing it in Legend

I do enjoy soloing bosses though. I drink concentration potions like they are my favorite energy drink.

Probably cause people feel like legend became boring? They just trying to faceroll it with stupid builds in unpredictable party set up in pug? Cause thats what I am doing most of time. Full Pepega mod enabled. Especially after I run some deeds solo

So how do I get most kills, elites, ranged, melee, specials and boss damage as a WS? Damn, guess I should play shade…Cause you obviously can’t kill 2-4 bosses with a WS, hyper twitch, what am I doing wrong… trolololol

(kicking teammates in the end of the map) guess what do i do for all green circles?

I remember feeling like I was amazing as WS, I decided to try something else. Saltz is tons of fun.

Getting off track. WTB great skins and less sock hoods.

Saltz is tons of fun

Yea, I did all the 100 legend runs on him as well. He’s fun, WHC is anyway. Zealot is absurdly broken and BH is just, I dunno how to describe BH. He’s just there…

But yea, been doing the 100 runs on each class lately. But every 5 runs or so, I reward myself and jump back on WS or HM for a game. They play so much better, and their’s so many viable load outs for them.

Back on topic, there is a cosmetic store coming SoonTM

When it cdomes to green circles, HM does that even better - spear makes a short work of bosses (it has ridiculously good damage, soloing bosses is easy), you can dash around and slaughter hordes, 2-poke stormvermin in the head, the only real issue are Chaos Warriors because you have to poke them and poke them and poke them and they are notoriously difficult to land consecutive headshots on due to their arm placement and movement.
Oh and you can be as bad as I am and still have plenty of success as HM on legend

In one topic I wrote about how I consider HM more survivable than Zealot - I mostly die due to specials and HM has better escape mechanisms, so…

Yeah I have to stay off WS because its so much more fun than everything else haha.

I hope that cosmetic store comes when the DLC drops

Yeah, i remind myself (and the friends i play with, bless their patient and bearing minds) from time to time how better it would’ve been if Kerillian would have stayed in Athel Loren with her careers.
First, WS, as already established, then a Wardancer (or Shadowdancer, for that gloomy look), with something like a possibility for enemies to not hit her and some Loec shenanigans as an ult (maybe smth similar to shade, but more Lore of Shadows, could have some more talks to Olesya that way), and maybe a real caster, a Spellsinger, or a wildwood ranger with profiency with glaive (maybe make that weapon ranger only?) . Also, double edged spear for Wardancer, with some amzing looking animations swinging it around.
This would’ve also opened the way for another elf to join the team, someone to ease the hate towards Kerillian, because you can’t beat an High elf regarding arrogance and being obnoxious.
Lorewise i can see that that would’ve created changes to Kerillians backstory which maybe would’ve hard to explain, but being able to be all 3 elfs from the starting point of a Waywatcher is a far stretch to begin with. She still is a Woodelf, no matter how much you concentrate on her ‘dreams’ (Isha) or ‘visions’ (Khaine).

Admittedly, though, all of the elves are of the same race. They’re only separated by a few generations; the terms “Wood”, “High”, and “Dark” are all just prefixes; they are all elves. Other than how they’re raised and their theological ties, there’s not much that differs between them.

I mean, in this lifetime Malekith went from being the most likely heir of the Phoenix Throne to being the Witch King of Naggaroth. It’s not entirely unlikely for a single elf to switch sides during their lifelong conflict. Technically, if we are looking critically at Kerillian’s lore, you choose her backstory depending on the career you play so she only ever manifests as Waywatcher -> Shade, Waywatcher -> Handmaiden, or Waywatcher -> Waystalker.

I may be just appalled to the End Times solution that they all reassemble and work together… And that that is kinda represented in her careers. Also: ‘you just should’ve stood a couple more seconds in the flames and all would’ve been good’. That was so… stupid. Thousands of years of war for maybe 4 seconds. But i guess thats grimdark (applying to fantasy too, i’d say)

Wait… was that really the whole schtick for Malekith? I thought that the Flame of Asuryan denied him (or at least that’s how I interpreted it). That’s why Malekith did not ascend to be the Phoenix King?

Bugger all, I’ve got to go reread that. Then again, if he’d succeeded, his Chaos Crown would’ve inevitably torn him up from the inside and Morathi wasn’t doing a whole lot to help that situation. Imagine if there were no High Elves at all; they’d just all be Dark Elves under the Witch King’s rule.

NEEDLESS TO SAY yeah, Kerillian took some weird turns into this game, but I don’t think they’re unjustified. I think they are each equally as likely as our good-old Kruber being knighted!