if they only could communicate.

You do realize they are struggling to fix numbers on thunder hammer right? And if you tell me changing a multiplier number on a weapon takes more than a month i will flip.

Please spare me this bs.

I am not expecting a massive content drop in a month. But at least fix the extremely minor issues.

Please tells us which of the issues the “community” complains about a lot can be fixed quickly. You are welcome, Mr Self Own. 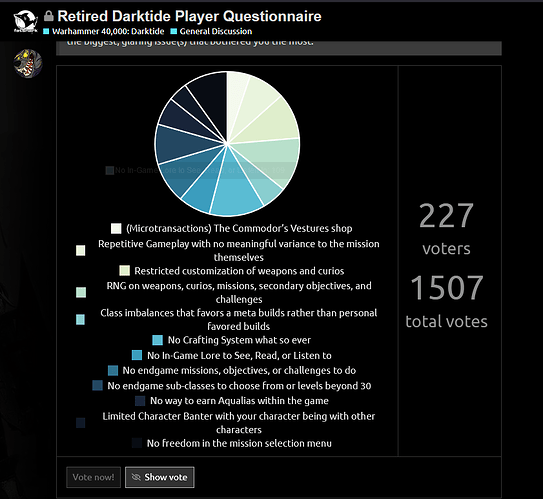 Its the * in the swear word.

For instance * example * without the spaces becomes, example

This is a cope.

VT2 wasn’t a great launch, but it was nowhere nearly as bad as this dumpster fire.

Well, since you need to spelled out, “No crafting.”

Except we do have it. Just turn it ON for more then one perk.

Adding "Level 380 grey weapon of every type’ to the shop would be a bit more complex, but wouldn’t take more then a day.

And now it looks you’ve gone from self own to public property.

Next time, do your research or be nice.

Their code is plain LUA, available and not obfuscated. While there are plenty of systemic problems with Darktide that certainly isn’t fixed in an afternoon, an abundance of broken talents and blessings are down to typos, wrong modifier called, wrong effect called etc. To suggest this wouldn’t be extremely simple to fix is just flat out wrong.

TY. Plus, the continued silence.

Thanks for your…opinion. Somehow I think 1.5k responses to a public poll on these forums, and frankly thousands of opinions you can read on these forums, Steam reviews and elsewhere, have…slightly more merit. Most of them cannot be easily addressed by setting a variable from 0 to 1.

I proved you wrong, you’re still here, move along.

Also, since you’re blind, your sample size (current chart, not your screenshot) is 228. Those 228 cast 1517 votes on which issues mattered, each vote being a different ISSUE, not a different VOTER.

OF that sample, 190 out of 228 stated that the lack of crafting was a major reason to leave the game.

I can’t speak for everyone else but I left the game because it is unfinished, so much so there is like 7 maps total. Very limited weapon choices, half of which are useless. Talents that don’t work right. Everything about how the shop works sucks. Weeklies sometimes don’t give credit. A crafting system that was promised at release and still isn’t fully implemented (and does very little). The amount of RNG in even trying to get 1 good perk let alone 2 on a weapon worth bothering with in the first place and more…

No 1 thing caused me to quit, a combination of all of these things made me quit and a sample size of 228 people out of the 100’s of thousands that probably bought the game at or prior to release is not a good sample size for grounds as to why people quit.

(this response was not directed at you SlenderBarracuda) just at this forum post as a whole.

Vermintide was fun… eventually and this game may be that some day too, I am just going to wait and see when that day is.

I can respect anyone’s personal reasons, and I also want more maps. One of the things promised long ago would be a lot of maps, by investing early in modularity.

That said, gamers will usually go to the ends of the earth for you if you show them you’re trying, and a big step would have been if they fixed the easy stuff fast instead of going radio silent for a terribly long time. As I demonstrated above, there’s tons of stuff that would be easy fixes.

Were I king of Fat Shark, I’d have kept the programmer on fixing the easy stuff, I’d fix the balance with daily patches or beta server type test zones where we could throw all kinds of stuff at the player-base for them to test and vote on, and I’d have concept art coming out on new content planned.

And (If there was any chance I’d actually BE in that role) I could get a lot more detailed. This is top of my head.

I do feel like the communication has been lacking for quite a while at what I consider a very important period for the game (right after release) and I know this has been addressed previously by a CM but I really think having a checklist of things planning to be done to fix XYZ would be a good start, I am not asking for a date or what patch will include what on the checklist but that could help so much just to see that these are the steps planned to happen. One would think that this is a requirement for the developers to have it is a roadmap.

I really wish there was more communication about this sort of thing instead of responding to shots fired, let people have their vent but there is no need to get involved in it, it is not professional to get sucked into that nor is it healthy.

Sorry you don’t know how it works.

And honestly, you come off as a guy who is going to make excuses for fat shark no matter how outlandish. “Oh, it takes months to do copy paste!” “Oh! 1500 votes! So many votes!”

Yeah. FS releases a game early and therefore game development suddenly does not take time. This type of sentiment is littered throughout the forum. I get that people don’t understand software development, but it’s where we are.

To be fair. FS brought this on themselves by releasing an unfinished product, but don’t expect rapid changes. Game development takes time especially on a live build where it’s important to destroy as little as possible. If you wreck an internal build that might even be worth it to try out promising ideas, but here you can’t.

So, it sucks that they chose to release an unfinished product, but don’t think that progress will be fast because of it. It’s unfortunately the exact opposite.

I’m starting to think that math just might not be your thing.

This is why they need to make the title a early access its not even close to a finished product/What was promised. They can’t expect people to be anything other than burned for spending full price based on what was promised on the steam page to what was actually delivered ingame. I will still play this game daily because i love it but it is getting really hard to find an objective other than stacking premium currency to keep me playing.

They should make this an early access title simply due to the fact that they promised a complete crafting system by December 31 and they do not have it, in doing this they have committed fraud.
I don’t need to dig deeper than that.

The only thing which I’m optimistic about is that Fatshark isn’t a corp like EA. Tide games are their lifehood, so unless they hit serious financial difficulties, Darktide is unlikely to be abandoned. Even if it won’t reach the Vermintide 2 level of content saturation and variety any time soon