Even though it very rarely happens, a player can get hit or killed on the exact moment they’re revived even if they’re blocking. I think this happens because of the inherent lag that comes with online play when you’re not hosting.
As the title says, I suggest giving players a very short period of invincibility when they get revived (or rescued) as a way to compensate for any lag. The getting hit when blocking scenario I mentioned rarely happens during normal play and can happen even with just 50 ping.
Please consider this idea.

This happens because when a player gets revived they are stuck in an animation. So when an ally goes down and rats are smacking the downed body, and you come in and just revive your ally without pushing the rats off of him, then he will get smacked while standing up.

I like the idea of adding invincibilty during the standing up animation, because if your reviver doesn’t take into consideration the aggro on your downed body, then you basically fully died in a matter of seconds, and the death is entirly out of your control.

What you can do meanwhile is to always push enemies that are smacking your allies body, pushing results in taking aggro, so you can revive your ally. Another thing is too just kill all the enemies and revive. Some players revive and think ‘wow this was easy, my block didnt’ even get broken’ meanwhile the downed player gets insta downed, and most of the time the player reviving doesn’t even know what happend. And assumes he forgot to block.

While getting up, you still have your downed, doubled red health.
What I’m referring to is the moment you become actionable.
If you go by this video frame by frame you’ll see I was already holding block as I died, but still died presumably cause of connection/lag. 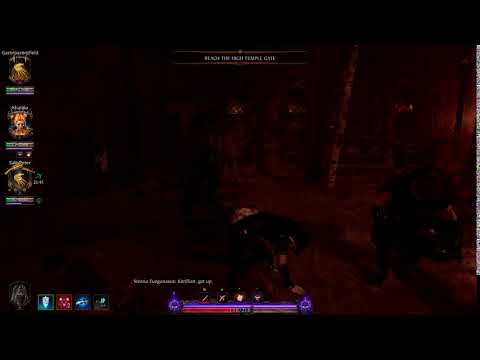 You died exactly the way i described it above. You died in your animation while getting up, because an enemy was still aggro’d to you. The sienna should of pushed the enemy and ressed you. I’m not saying it’s the sienna’s fault (as maybe she didn’t know this was a thing), just pointing out how it happens.

I do agree that there should be a invincibilty, which would make it so this doesn’t happen.

haha that was 100 percent siennas fault and he knows it

what your asking for would take ALL the skill out of clutch revives. Not in reference to this sienna hes awesome, but the majority of good players really suck at reviving, put in minimal effort and don’t clutch it out. Yet have them clutch a game when other players die and they put in full effort. its the most annoying thing in this game.

news flash assholes, if you think you cant get that revive or its too risky ? your wrong. you just suck.

I feel I have to clarify that in the video above, I was actionable at the moment of death.
I think the “while getting up animation” you’re talking about is the player getting revived rather than the exact moment the player is already revived. Because the moment you get revived, you become actionable, you’re not “stuck” in any animation. The moment you transfer from a downed state to an actionable state, your perspective is simply transitioning from 3rd person back to 1st person. It’s similar to when you press X to view your own character and how you’re not actionable during the X press, but are when you release it and during the transition from 3rd person to 1st person.
(Edit because typos/grammar)

i do agree if would be nice, help out people on high pings.

The alternative is that the person reviving the high ping player needs to know hes got about however many ms before he can block from when he gets up ,so just take it into account when you revive, as in kill or stagger enough to give them a bit extra time. simple really. i think there is more of a chance of developing a reviving guide rather than them adding this delay…it might assist lower ping / host too much…

I think it would be good. If it’s too much, just add it as a buff that activates only when over or reach the specific ping/latency point. And deactivated when it’s lower than that.

Of course, good revive tactics absolutely do help in mitigating this rare issue, and you’re right in saying that this would benefit the host a great deal more than any other players.
My suggestion of invincibility doesn’t have to be 1/4 a second, it can be even shorter. I just want to suggest what I believe to be a universally effective way of addressing a rare, annoying problem.

As MeleeSlaaneshFnE said, it could be something that only activates in certain condition, which I believe is a good idea.

downed state to an actionable state, your perspective is simply transitioning from 3rd person back to 1st person. It’s similar to when you press X to view your own character and how you’re not actionable during the X press

That is an animation. I’ve had this happen to me as host, client, whatever, doesn’t really matter how much ping you have.

Don’t get me wrong i do agree with your suggestion.

No, this is a real thing that happens. To explain in detail, when you’re downed you get a lot more health (something like 300), so you can’t just get taken out by a single overhead attack. When you get back up, as long as you hold down right click you should be able to block whatever attack is coming your way so you don’t just instantly die to attacks. However, what happens when you have a significant amount of ping, is that as you’re getting revived, even if you’re holding block, the moment you get back up you’re still vulnerable because of ping, and you no longer have your big health pool, but now half of your original health (so something like 60 tHP), and then you just get whacked by an overhead. I’ve had this happen to me a few times when in game as a client with 160+ ping, and my friend also has had this happen to him several times and he has around 190 ping.

You might be right, just seems weird that its a lag related issue if it can happen without lagg.

Tbh it doesn’t really matter how it happens, it should be fixed as this is entirly out of the control of the downed player, and very very frustrating.

I don’t think I’ve ever had it happen to me as host. As long as I hold right click I found that I’ll never get whacked as soon as I get up. It’s only with ping that I’ve had it happen.

And yeah giving a small window of invulnerability is just QoL, clutch reviving your teammate only for him to instantly die cause he couldn’t do anything about it feelsbadman.

I’d rather grant players a short period of time in which they can’t be targeted by direct enemy hits instead of pure invincibility. They wouldn’t take any damage from DoT effects when invincible (like gas, flamethrowers, ground fire, puke etc.). The idea is to get rid of insta-deaths-after-revives that are due to latency and not to make reviving a completely safe affair. If your team mate doesn’t cc beforehand, that’s on him anyway.