I should record, but I’m kinda tipsy and cba setting it up zZz.

@Kitten I’ve played a couple of runs together with some random Huntsman today. And basically he was pulling almost the same numbers as you did on that run, 12-13K overall and around 3-4K on bosses. He quite literally destroyed all the monsters as well.

What were you running equipment and properties wise?

I keep seeing people say the Huntsman has no defense while ignoring that a majority classes lack those tools also.

I keep seeing people saying Huntsman’s draw is high ranged damage while ignoring his dominance over other ranged classes.

I keep seeing people talk about his melee options as if tweaking e.g. Sienna’s melee would be able to compensate for anything OP and ranged.

Its kinda hard for me to understand how people can defend this high damage.
This game is about challenges.
Bosses, Specials, Elites and Hordes are the challenges this game has to offer currently.
This game without Bosses or Specials or Elites or Hordes would be boring.
So if we have a career that makes one of these challenges trivial, than it is boring and like removing content from the game.

Just like its probably satisfying for a Sienna to delete a horde while melee gets the scraps.

Yeah its true. It can happen that you run into a team settup where you nearly won’t fight any hordes.
BUT there are al lot of complaints about that, like people complain now about HS.

Hello! Just a little over twenty minutes ago i was playing on champion when i suddenly came to realize a few things as i was playing with a group. A pyromancer Sienna, a ironbreaker bardin, Bounty hunter salty and myself on handmaiden Kerillian with a spear. We ran a few maps with hardly any problems…or rather no problems at all actually… The reason for this is, everything died at a massive distance away, Between Sienna and Bardin roasting everything there was hardly anything for me or Salty…

So i can totally understand why people don’t like this high damage.
Most people play this game for its challenges. Making this game for a few people who like it to cheese a challenge, doesn’t sound fair in my oppinion.

if this were a single player game hobo would be fine, in a multiplayer game though it comes down to your opinion its either ok or not for one character to remove all specials and bosses from the game using a zero risk low skill ceiling range weapon and still retain a top tier melee weapon.
As my tone indicates im on the “its op” side. simply because i believe and think its most fun if in a 4 player co-op game the players should need each other. you should feel like your co operating vs the enemy , which is what L4D nailed. the problem in vermintide is it feels like your competing against your own team to get kills , now im not talking about chasing green circles here i simply mean trying to find stuff to do so your not bored.

He is obviously bugged and will be fixed sooner or later. So enjoy your 5s killing boss while you can.

As a Kruber/Sienna main I can confirm that Kruber Huntsman ATM is completly broken. BROKEN!
If you are a good player you can carry entire games with Kruber wielding a longbow. You litteraly Solo bosses. The others don’t even get close to try and do anything. Check screen below. This is just one game. The others are basicly the same.
https://steamuserimages-a.akamaihd.net/ugc/919176676386771624/C4C664D9E2B9CF4C33B7168EA5F535ECD5AD80A9/

I mean the Shade didn’t even get to do anything besides maybe get in a ranged mercy shot or something for 43 damage.

As of 1.0.8.1 Shade is also questionable imo. When you are able to down half the HP of the final boss on skittergate I do find the balance very questionable.

I don’t know what Fatsharks aim is with Shade and Huntsman but they are complete bossraping machines right now.

I would go ahead and say that Huntsman is so strong right now in the hands of a good player that he is nearly mandatory in any teamsetup. If I play solo and want to win, I just play Huntsman and carry the game. That’s how broken Huntsman is.

I really hope Fatshark devs look into this. Because honestly it’s abit boring. When I play with friends we avoid Huntsman and Shade just for the purpose of getting a more “epic feel” when doing runs. Because otherwise one of us just rapes the boss and it’s kind of anti-climactic compared to what it usually is.

TL:DR - Huntsman and Shade does way to much damage in there ultimate forms vs bosses. Nerf should be heavily considered.

Here is a picture of a poor squishy Huntsman Kruber with his useless weak halberd:

Also, because Huntsman is so weak in melee, when my team died in darkness at Hunger in the Dark to a bunch of stealthy CWs and a horde spawned instantly afterwards, I wasn’t at all able to solo murder one subwave using LMB->Block halberd combo. And then, since Huntsman is super squishy and has no saves, I totally wasn’t able to activate Hunter’s Prowl, break distance with horde with the help of stealth and get to my downed mates, shooting 2 stormvermin and a dozen of rats on my way with his super slow and inaccurate bow. And of course, even if I somehow managed to do all of the above and revived Unchained, the two of us had no chance to deal with the rest 2 subwaves, cause everyone knows that post 1.0.8 Unchained is the second weakest career after Huntsman.

On a serious note, I decided to play Hobo Kruber purely because of this topic (many thanks @Kitten, many thanks @CommanderJ). Played 3 games, and my favorite moment was when with a combination of Hunter’s Prowl + Speed potion I was able to completely erase a Chaos Patrol (only few shieldbearers survived). I think this example alone is enough to give an image of how broken Huntsman is now.

To hell with Burning Head Sienna! Testing 360 HP double melee power Unchained will wait! Right now FS provided us with super fun super OP official 100% legal abuse, and I am gonna have some fun with it for a while. I suggest you also try it out, guys, simply to decide for yourself once and for all if PVE games need content nerfs or not.

Not in this way… I have seen only nerf that have ruined this game… making it more boring.

Anyway GG guys, GG… We have seen to become “trash*” Shade, Merc, WHC, Zealot and some weapons (and we already have few weapons) like blunderbuss and exe sword. Now, thanks you all, is Huntsman turn. Then we will fight with bare hands. IMHO, a very bad community.

Posting a screen with lots of green circles does not your argument make.

Sienna, IB and BH must need HUGE buffs because this picture:

If you play with passive/bad team, then yeah you’re going to rack up a lot of kills and circles with pretty much any character. Huntsman isn’t the only character you can stack crit on. WS stacked with crit and crit power can routinely oneshot things that huntsman couldn’t dream of oneshotting on a crit.

When did his longbow become zero risk? It’s the only ranged weapon in the game actively trying to get you killed, and that has a zoom that makes you miss. The only weapons even close to being this dangerous is the sometimes wonky quickswitch on Sienna when trying to switch to melee while charging a staff.

Those numbers you have posted are not very impressive. 8K damage is routinely hit with any and all characters in good hands.

As you can clearly see, he’s completely worthless in melee and is bound to take tons of damage and die, as soon as at least one rat gets close to him.

Those arent exactly impressive melee kill numbers. Juuuuust saying. Your team looks incredibly passive as well, which of course makes it super easy to rack up the green circles. Those numbers are attainable by any class. 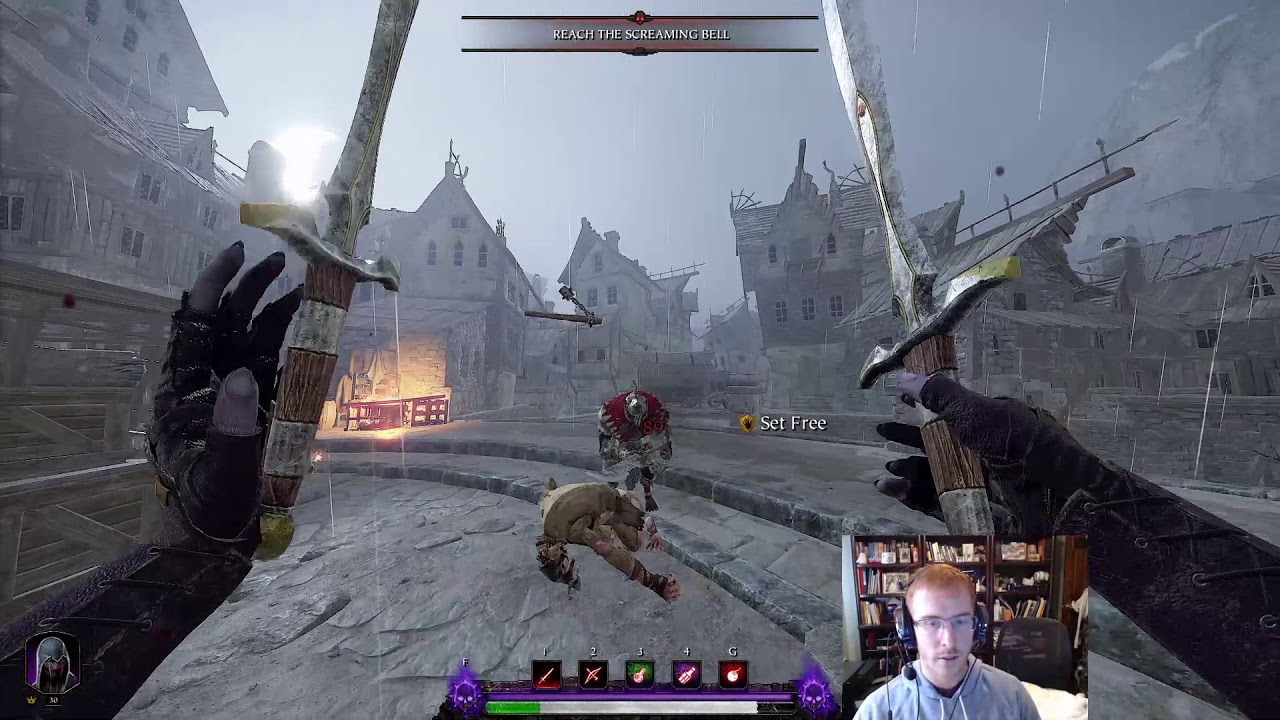 Watch it from 13:40 til 13:50. That’s the damage of ultie HS with 25% power buff from ranged weapon, and it tooks about 15-17% of Fiend’s HP, with str pot you will do a little more, and with conc pot you can spam ultie, but is it comparable to to hobo damage output? Show me the way Shade can kill boss in 5 sec, it a perfect sircumstances it’ll take about 15 sec, with conc pot, when nobody is kiting boss to the highground, etc, but usually it takes about 30-40 sec to kill boss as Shade, as hobo I can PEW-PEW him down in one ultie!

I agree that Shade’s boss damage with DnD is a little too big, but it’s a melee weapon, on a character with same base hp as hobo, and her damage is nowhere near hobo.

Yeah I can’t kill things that quick with Sienna

If wasnt trying to show off his epeen and actually did that with a team and ulted from behind the boss, he would have taken half HP from the boss in one dual dagger hit.

I’ve said it before, and I’ll say it again, if Shade is fine, then HS is fine.

People seem to forget that HS isn’t the only character that can trivialize patrols, for instance.
RV makes them completely trivial. Sienna (or IB flamethrower) can stagger them endlessly. Shade can decimate them. And so on, and so on.

Suddenly HS being able to shoot up to 4 CW with perfect timing is a problem. Honestly it feels like people are upset that Kruber has something that is worth playing, compared to the other classes.

With this kind of mindset, I should be arguing that all fast and easy dual weapons and glaive makes WS too strong at melee for a ranged character, so all those weapons should be removed.

Yeah I can’t kill things that quick with Sienna

That’s the core here isn’t it. Oh dear, someone else is getting to have fun, and oh boy, it’s even on the lamest of the lame Kruber.

Those numbers you have posted are not very impressive. 8K damage is routinely hit with any and all characters in good hands.

You clearly missed the point. Look at boss damage and you see why Huntsman is broken.

Just as I said in my TL:DR but it seems you ignored that. I’ll have to post it again.

“TL:DR - Huntsman and Shade does way to much damage in there ultimate forms vs bosses. Nerf should be heavily considered.”

OK, let’s play this game. Boss killing is what they’re built to do. If you trivialize their boss killing, what would you give Shade and HS in return to make them worth playing?