How to dodge the Hound!?

I have 400+ hours in Vermintide 2 and already 100+ in Darktide, so I’m no noob. However, I cannot for the life of me consistently dodge the Hound! Nine out of ten times I’m certain I got the timing right, and yet the dog just HOMES IN ON ME. What am I missing?

I had a similar issue for a short while with the Trapper, but now I know you can be really patient with her and just dodge her net the moment it basically flies at you. This isn’t the case with the dog: I’ve tried dodging during his bark and during his leap. I’ve even dodged when I was certain it was too early, and it was. 100+ hours into Darktide and the timing for the Hound still hasn’t come to me, so I’m either an idiot or the creature is flawed.

You can dodge it but you can also simply … (edit: time-)block it actually (dont remember pushing it when blocking but maybe).

not perfect at doggo handling but my experience:

safest way for me is target marking and wait around an edge. Actually I cant remember an “180° nopescope vermintide 2 assassin” jump behaviour around a corner. - So it works for me

not tested: Ogryn shield special defense (I dont know if it will block it)

I find the timings to be quite off.
Dodging before the tell or during the tell (audio cue) grants most success for me.
Which is backwards, because you should use the cue to tell you to dodge. So I’ve learned approximately which distance both Pox Hound and the Mutant do their tell and dodge based on that instead. Which is right before hound pounce and mutant raise his arm.

I’m jotting this down to overly tight response time and server delays / issues.

Personally I can’t figure out how to dodge the Ogryn monstrosity charge. Managed to do it once, by fluke.

If you’re playing on heresy and up and there’s a horde? Pray the server isn’t crapping itself.

Otherwise good ole dodging right before the pounce. It technically has a very quick animation where it bows down on its front paws before pouncing but it usually instantly spazzes into a leap and the animation doesn’t play half the time. I’d highly recommend shoving and/or heavy attacking (depending on weapon) right as you dodge as well.

Or the dog just decides it actually exists in multiple dimensions and 360 no scopes your face after flying past you.

The timings in general are completely screwed because the game’s servers can’t handle the amount of stuff happening at once. It very noticeably starts struggling once a ton of things are going on, so there’s no one size fits all solution.

The dog is by far the most difficult enemy for me to handle even after 130 hours. Using the barks as a dodge cue makes my character actually dodge the pooch, but it usually grabs me out of thin air. I chalk that up to lag. Dodging too early causes the dog to just re-aim, and suddenly I’m grabbed again.

During beta I was able to fairly consistently push the dog mid bounce and deal with it then, but after the last couple of patches I haven’t really been able to do it. The only success I have with them is to hide behind a corner and push them down as they round it, but seeing as they run away unless you beat them to death instantly, it’s not really that doable in most situations.

I tend to handle them like I do assassins in VT2 : dodge sideways, turn a bit towards where you were and push. This is a belt-and-suspenders technique that always works for me against assassins, and very successful against dogs.
I find that in Darktide though I’m more often blocked by objects or pillars that end up in me getting grabbed, but that is a question of level familiarity.

You can’t block it , even ogryn shield special can’t

I main ogryn, and with all the hunting ground missions, I like to think I got alright at dealing with them. Personally, I don’t dodge them much, just make sure I have some terrain between me and it (corner, pillars, low cover) and then perma stagger it till death. Shove before it hits you is your friend too. Most heavier melee weapons seem to stagger in just one light (power maul, shield and club, chainaxe, from my experience)

I’ve seen troopers and zealots underhand drop a grenade too as a panic option. Sure dog jumps you, but gets blown off a second later.

Yeah, unless THIS happens :

was using the corner to wait for hit. special light force sword one shot them, even in damnation, but hit registration said no.

And for every time that happens, This also can happen and all is right with the world …

You need to assume the dog CANNOT be dodged and hammer it into your brain to parry the hound. When you hear the sound of it pouncing you need to push. Even if you cant see it. I’ve parried a dog like 3 times already when it wasnt even in my line of sight.

You can also parry/push the suicide bomber.

The ones you want to dodge are charger and trapper. For the charger you want to dodge to the left, it has 2 arms : the left is tiny and right is big, the bigger one has a bigger hitbox so you cannot dodge it even if you time it perfectly.

Nope I eat dogs for breakfast everyday, when the game properly registers the hits. 90% of the time it works, but on rare occasion the desync happens, even a push can’t save you 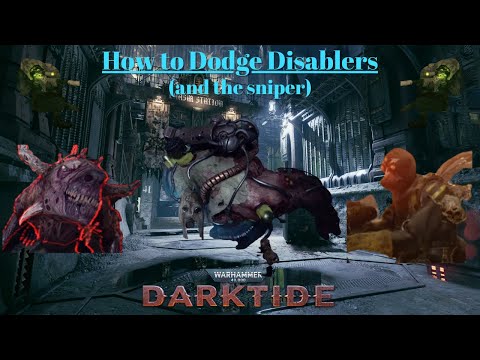 You don’t dodge the dog, it teleports to your location.

Thanks for the tips, but it turned out it’s mostly due to the goddamn desync. It’s best to just push the dog, and even then the desync makes it unreliable AF.

Anyway, I’m done with Darktide for now. Fatshark lied in December about the Crafting system, making it sound they’d have it in within mere days. Turns out they believe their employees are more important than their customers, and after a long vacation released a statement blatantly confirming they released an unfinished game.

To think I defended them…