How did Bardin get so bloody lost?

And yea, she’s teases Bardin for being a stupid dwarf and says she’s been to the hold a very long time ago. She asks him how he could forget the location. Bardin naturally gets very very upset.

Ahhhh, I do remember this voice line now. But seemed to me more like a lie to get on Bardin’s nerves… Like she does to everyone.
I heard now this voiceline:
“I hope Araloth doesn’t see me use this worthless arrows.”
So she definetly has some connections to him. If it really was this guy.
Could also be just a cheap Cousin Okri Rip-off. Nobody beats Cousin Okri. NO ONE.

She talks about Araloth during the drunk dialogue as well I think. I’m pretty sure he’s Ariels person champion. He’s also the father of Lileath’s child. You know Lileath, the goddess XD my boy Araloth gets around… 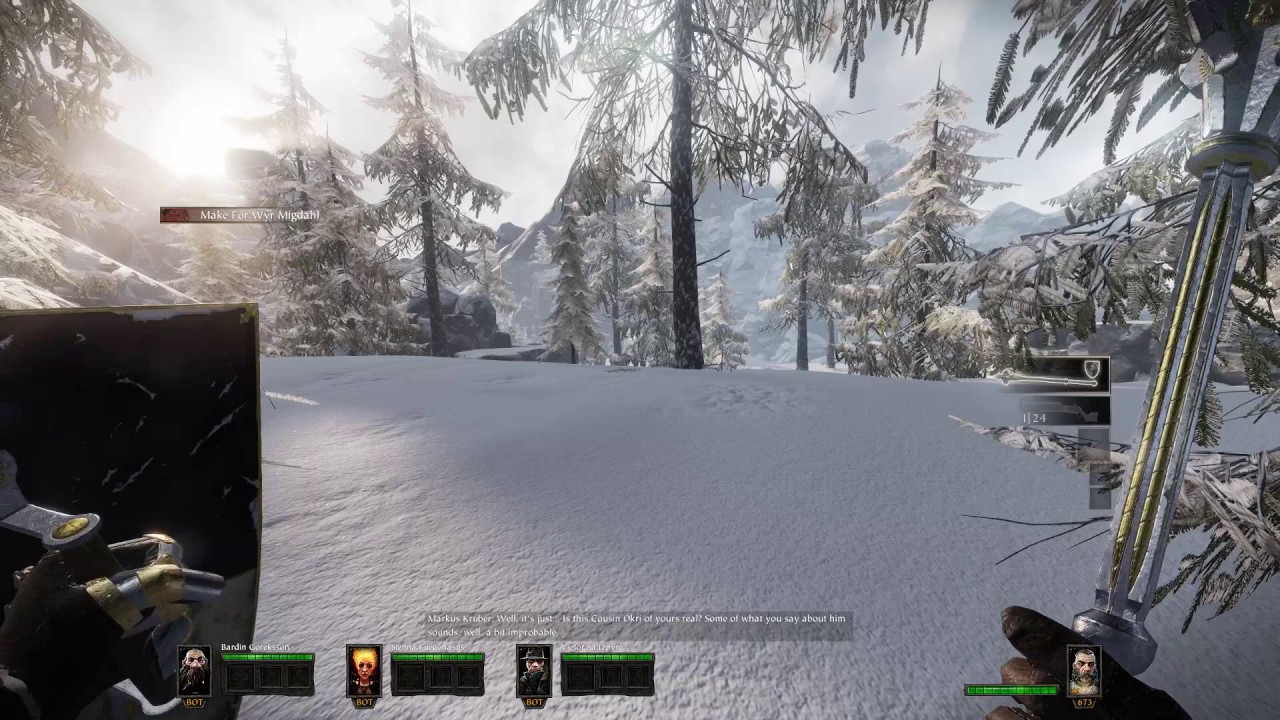 (i love the guy who did these)

Pretty much so. As far as I know Bardin also makes a comment in “Skittergate” that he has been in Norsca so its more likely that he’s making up reason to go here and there than having some actual plan for finding Karak Zorn.

Oh man, you haven´t heard the dialogue Bardin has with Nurgloth/Demon in Enchanters lair?

It´s a downright one way depression train ride and it explains a significant conversation he has with Kerillian as well as his out of character verbal lashing against Kruber for his slack watch.

Bardin is in several ways similar to a slayer but a sizeable portion of all that rage is replaced with guilt and sorrow instead…and rather than leaving his hold to avenge his disgrace it´s more like pure vengeance against the skaven since there is nothing else left.

This dialogue is easily the saddest one out of the 5, the only one that is even somewhat close is Sienna’s.

Yeah Bardin’s backstory hit me right in the feels. Kruber and Sienna are jaded to their own past, whereas Keri, Vic and Bardin are still tortured by theirs.

Kerillian´s story is pretty unusual though, she actually has a pretty unusual sense of morality for an Asrai given her actions… I mean, would any other waywatcher or other wood elves have felt bad by killing a bunch of humans by mistake? My impression was that most of them had the mentality of “We´d rather kill 10 innocent humans than risk letting 1 guilty go” .

But here she is going “I wanted to help my home but i ended up getting the Mayflies killed for nothing but my own stupidity”.

Really an oddball in my eyes, but it might be me just not knowing all that much about the universe in general

Kerillians backstory is -for me at least - not about the slaughter of the relief regiment sent to aid Ubersreik and I think you’re correct in that she isn’t too worried about the deaths of the humans, but more about her arrogance in misreading the Dryads message and the shocking(for her) realisation she can get things spectacularly wrong. Couple that with her following the Spellsinger in the woods that somehow resulted in her exile suggests she broke some fundamental rules in Wood Elf society.

Meeting Bardin could’ve been the point that turned her onto the path of redemption. IN fact there is something hopeful about all of the characters. The destruction of Ubersreik offered them all some hope for vindication, if not complete redemption from their various doom laden pasts.

Kerillians backstory is -for me at least - not about the slaughter of the relief regiment sent to aid Ubersreik and I think you’re correct in that she isn’t too worried about the deaths of the humans, but more about her arrogance in misreading the Dryads message and the shocking(for her) realisation she can get things spectacularly wrong. Couple that with her following the Spellsinger in the woods that somehow resulted in her exile suggests she broke some fundamental rules in Wood Elf society.

I was thinking this too first but then some of the taunts from the voice in the lair wont make sense at all, she would not react so strongly when it pokes her about “casting thousands of blameless souls to the void for nothing”…to me this truly implies that she feels bad about the deaths.

But she clearly has no problem killing humans by the dozens? She has openly admitted to it previously? So what is different with the Ubersreik case? …I believe it to be a question of cause.

When she killed humans in the past she had a cause, defending her home, punishing raiders or perhaps even self defence. The goal of the raid by Hoggers bridge was the same but the issue here is that the cause was not accomplished and instead it was even sabotaged in a sense.

She wanted to protect her home but instead she created naught but death and only helped Chaos kill even more for it, helped it start bulking up for an attack on Athel Loren.

The feeling that thousands if not tens of thousands of people got killed directly by her or got assisted by her for nothing. Made all the worse by the fact that as she gets along more and more with the present company the realization that she didnt just kill “mayflies” dawns more and more on her.

She caused the deaths of people, likely somewhat barbaric, insensitive and ignorant people by her standards but also possibly good and honest people who were absolutely innocent and did not deserve the fate she helped vist upon them.

And this, is what that voice and her conscience is haunting her about…made all the worse by her high pride.

Meeting Bardin could’ve been the point that turned her onto the path of redemption. IN fact there is something hopeful about all of the characters. The destruction of Ubersreik offered them all some hope for vindication, if not complete redemption from their various doom laden pasts.

I wonder, to me the meeting of the characters were to the benefit of some more than others. Kerillian&Bardin do take solace in being able to kill chaos minions while trying to avoid thinking too much but others like Victor kinda seem to be on the verge of a breakdown.

His faiths been shock, he is haunted by his past, he´s an outcast, he´s started having “heretical dreams”, he´s been faced with the corruption of the empire more than before. The voice and his dialogue kinda reinforces the idea given how Saltz is noticeably shaken by each and every line.

Sienna meanwhile…is more in the middle of a ongoing crisis but shows no real signs of going in either direction. Gaining control or going crazy that is. ’

Kruber is Kruber, fairly pleased in what has been accomplished and for good reason from his perspective but keeps both feet steady on the ground as he does.

Isn’t Bardin in Übersreik to find someone (Imperial Dwarf) who can read a foreign sort of Khazalid that no one knew in his old Hold ?

I thought he was heading there because he had a script/map but couldn’t read it and heard a dwarf in UBersreik could read the map for him?

He had a map, yes, he found it while doing Ranger stuff, in some forgotten mine on some dead dwarfs who where surrounded by dead Skaven.
He couldn’t read parts of the map as they were written in an ancient dialect of Khazalid, but he could read the name Karak Zorn and that there was some sort of route description on it.
He went to Übersreik because he heard that there would be an old dwarven tome written in the same old dialect as the one the map is written in.
Kruber pointed him in the right direction to the antique shop in possession of the book (as locals tend to know their city), but alas it burned down, most likely with the book still in it. (this comes all from voicelines in V1).

A dawi mate of his led him to a set of stairs, but forgot to clarify whether they went Up or Down.
He’s been reliving that nightmare ever since.

Cog Hammer confirmed (it move)
Can be used as an axe too
Dwarf Pistol (Look like the one on the minis)
Fast shooter
Ability: Gatling Gun

1 Like
← previous page
Why not join the Fatshark Discord https://discord.gg/K6gyMpu