Enemies will also track your dodges. I had hounds disabling me while rotated by around 270° compared to their line of attack (my char dodged, disabler followed).

I have very much noticed this is a problem. It’s much more consistent in high intensity engagements, but it can come up anytime. Worst case I spent half a magazine not having any hit register even when they landed center mass.

Adding this as more evidence: 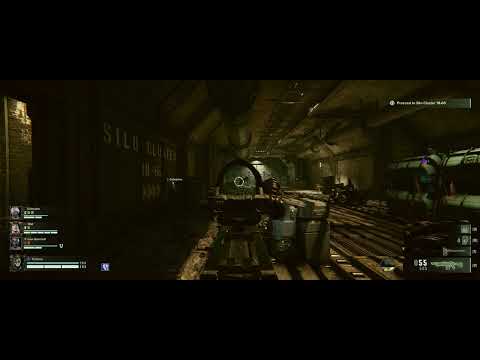 I want to add, this is not just a minor problem. This problem can even cost you a match on damnation, when sometimes failing to kill a single ranged enemy may end up getting killed.

sometimes the special charged attack on the thunderhammer simply bounces off the enemy without consuming the charge and still staggers you, requiring you to press once again just to get a hit confirmed. i don’t have any recordings of this currently but if i do manage to record it i’ll edit this post.

With the number of mobs on Heresy and its fast attack speed, using the combat blade results in literally 1 out of 3 swings just doing nothing. Pushing should lightly but reliably stagger small enemies, but it fails to do that half the time.

The servers are slowly killing all of my desire to play the game, between all of the hit reg issues, enemies hitting you from a mile away, snipers landing shots you very much dodged (And most specials, snipers are just particularly frustrating with how punishing a single shot is), etc. I find myself playing my zealot more than my ogryn (despite liking ogryn more overall) just because at least my zealot has his passive to save him when the entire horde randomly decides they don’t feel like reacting to my smacks anymore, or that sniper shoots the air 10 feet to the side but it ‘hits’ me.

That and between all of the other changes with coherency/toughness and how aggressive the spawning is of disablers on anybody not hugging at least one other person it really feels like they’re trying to lower the skill ceiling while keeping ‘difficulty’ but it just ends up feeling cheesy at times. I’d kill for P2P back, this is part of why I only ever hosted, I have very low tolerance for laggy garbage ruining plays, especially in a PvE game.

In this short clip the game first rolled-back my shot (loot at the ammo counter lol) and my shot didn’t matter (there was a blood splash visible) but a couple of seconds later the game denied my charged melee attack (you hear the sound of it but that’s all), basically leading me to death…

I’m going to throw this in here. Game from about 30 minutes ago:

As well as this one, but I’m not sure if its an “input lag” related error or not:

This is a big reason why I say lol weakpoints and just loop ult all game with a braced autogun and 75% damage reduction to ranged with all shooters marked. Such deep gunplay wow

Seems to much more often happen with the knife push-stab, so possibly a symptom of the weapon swing rather than netcode.

Is it just my awful eyes or did like 60% of your shots on Beast weakpoint register as body shots despite clearly being aimed at the weakpoint?

I’ve noticed this happen in a lot of my games as well but usually just chalked it up to me being bad.

It does seem to be an actual issue for a lot of people, though.

I really suspect they dont have any client prediction at all…