I am not a great player - more like average. I have recently started playing champion level with maxed out characters and gear. I found that playing Iron breaker or zealot is super easy when playing champion but I have alot of trouble playing Seinna in champ.

My main issues with her is that trying to avoid friendly fire means I have to put myself in vulnerable positions to burn down hordes. So many times when I do then, I get smacked from behind and go down. Now, I can try to look around me every few sec to make sure no one is sneaking behind me, but that means breaking the focus and CC of the incoming horde which will mean that they will swarm us.

The second issue is getting surrounded. I hesitate using the shotgun of the beam staff because I am worried the friendly fire will hit my team in melee. So I just fight on with the Mace and struggle overcoming hordes in melee. I used to use the sword previously which was better for hordes but sucks against armor.

Any advice you guys can give me would be appreciated. I really like the wizard character and so I want to use her for champion, but I am having trouble making that character work.

The second issue is getting surrounded. I hesitate using the shotgun of the beam staff because I am worried the friendly fire will hit my team in melee.

Beam staff shotgun only causes FF when allies are in it’s reticule. So shoot just besides them and it won’t hit them. Even if it does hit them, it does a measly 1 damage. Everyone has the temp health talent and so you should not worry about FF at all, any incidental FF damage you deal is soaked up by the temp health and is MUCH lower than ANY hit any enemy could land on them.

That said, don’t be one of those ranged players that feels compelled to shoot down every idle enemy in a hallway through his allies, or to shoot down an enemy that your ally is already killing in melee. In that case, pull out your melee weapon and swing with them.

During hordes, especially ones that are surrounding you, that have broken through controlled choke-points, never ever hold back on shooting your biggest AoEs to clear them, forget about FF entirely. Again, a single hit from a tiny rat is infinitely more damage than you will deal to allies here. Use your spells to clear the horde and push it back into a choke point, once allies have it back under control in melee, stop. Don’t keep shooting into them.

Also the best positions to shoot into a horde is with a slight elevation so you can shoot over your allies, which you can often find right next to them. And if you constantly get hit in the back… Then cover the back. Stop chasing green circles by shooting through allies who have things covered and instead cover the back, even if nothing comes and it’s boring.

Thank you so much, this is great advice. Especially the fact that shotgun only hits allies in it’s reticule. This will help tremendously.

Beam staff ff is virtually nonexistent it’s so minimal. It’s not worth worrying about because the damage you’ll prevent by going full ham at all times far outweighs the few pixels of temp health you may strip. This goes for beam, burst, and blast. Just don’t worry about it. Use beam wiggle to kill/delay distant hordes and spam burning head and if anything gets within 10ft switch to shotgun blast and incinerate it. If a sv patrol is aggro’d, keep it Cc’d with blast.

In ~300hrs I’ve only had one person complain about Siena ff because they didn’t know how little damage they were taking and thought them getting hit by slave rats was ff damage. Most people understand you’re not actually hurting them. Only time you have to be careful is if someone is a fart away from the grave.

Long story short, don’t intentionally leave a beam on someone, but also don’t hesitate to shoot/burst/blast through them anytime you have to kill something. Don’t let it affect your handling of the character/weapon.

Edit: watch your Burning Heads though. They hurt. Fire them as often as possible, just not into anyone’s back.

Thank you both. Your comments really helped me. I have another question about pyro ult and friendly fire. How sensitive is this ability to hitting your own team mates? I mean should I be very cautious and make sure there are no allies at all in the general direction that I am using it?

Edit: Ok ty, I just read your edit about this.

Just make sure you’re not aiming at someone when you fire it. You have no control of how the ricochet works and it will occasionally come back and hit somebody but that’s not your fault. Just don’t hit somebody in the back of the head at point-blank range. That’s all you can do. You should still use it every chance you get. I will upload one of my sienna videos for you to check out when I get home. It should help.

Don’t stress too much about it though because even burning head doesn’t do that much damage from friendly fire, just enough that it’s worth considering and avoiding. It’s no blunderbuss

Vid as promised. All I have is a Festering Ground run from a while back a lil after I hit 30 on her. It’s Pre beam “nerfs,” from before the game started giving me 2.5k-3k mobs and beyond deed level specials every damn match, and I make some dumb mistakes but it’s still probably useful anyways. Only difference with the beam nerfs is you generally want to wait longer before triggering bursts when you can, but with proper gear the reduced 1st burst tier isn’t generally a detriment.

This was a decent pug group I had a bunch of successful runs with so I’m considerably less aggressive than I normally would be because I trusted them and never had to worry about their positioning. You’ll see me leave them to handle stuff on their own a few times and instead of hogging kills, I’ll try to Cc mobs whenever possible for them to drop with ranged without me having to interrupt my beam control (that’s kinda the ideal but in most pugs you’ll end up having to just go ham all the time in my experience)

Never played Sienna in V1 so you can tell I was still getting used to the “tunnel vision” of the beam staff a bit when I recorded this. I derp off an edge at one point and get downed once when I forget my surroundings & get stuck on a tree root trying to strafe dodge a Stormfiend. Got downed once when a static group w berzerkers noiselessly aggro’d; half my fault because I got close despite knowing they were there but I was expecting to hear them if they got any funny ideas.

My heat management in this is pretty good. Positioning is generally good but near the end I get a lil tilted after taking a weird stealth hit and start accepting more damage than I like to in order to kill more mobs XD There are a few times where I intentionally accept a weaker positioning to have more fun (ie. sitting where I have to juggle a wave from two directions instead of taking three steps back and funneling them all right into my blasts).

My defensive play in this is alright. You’ll see when I’m at risk of dropping I’ll go into a defensive state and get hyper cautious about my surroundings. How you deal with that situation is very map dependent: since I was in an extremely open area with nothing to kill, I turtled until I know for certain it was safe. In tighter quarters, with lots of fodder around, you want to get back to killing stuff as quickly as possible to max out on temp health. It’s a delicate balance but you get used to it fast.

It’s rarely worthwhile to swing your melee weapon because, unless you’re blocking, you should be using your staff. I take purely defensive properties/traits on my melee weapon (stamina + block cost reduction) with Off Balance, which is extremely potent and abusable. I use the sword because it has the best wide-angle CC of all her weapons and if I am swinging it I want to know whatever I’m hitting can’t hit me back (but really, don’t ever swing it, it’s not worth the risk and she hits like a wet noodle).

My burning head usage here is relatively smart but more conservative than needed. You’ll see me save it for special spawns a lot, which isn’t bad to do, but there are lots of times I could burn it to check ahead but don’t. Since its an already short cd with a further 30% reduction and can be boosted by wiggling the beam, you can launch it virtually anytime it’s available without having to worry too much.

Anyways, hope that helps. Sorry I don’t have a newer video. These open maps are more challenging in general, due to fewer choke points with which to punish your enemies, so I think it’s got some value for that as well (anyone can stand in a corner and beam/blast down a hallway). 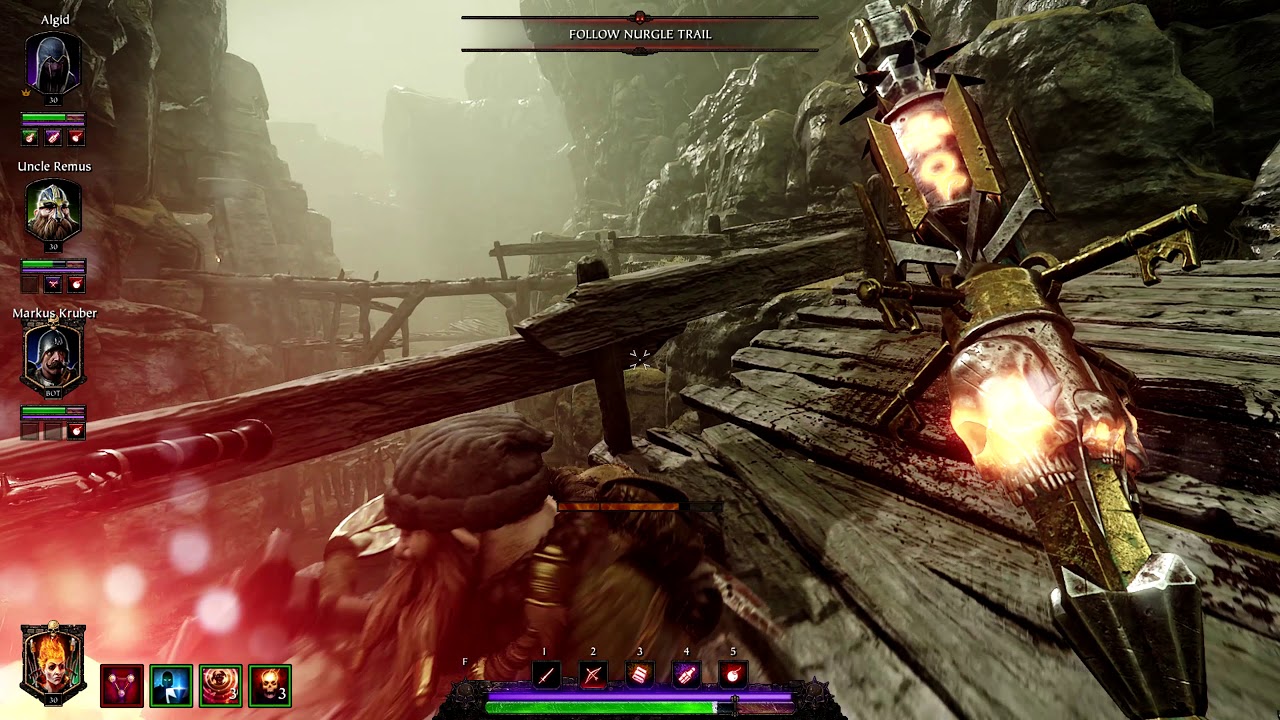 Sweet, thank you. This was really helpful. I think I was just too timid about using staff and ult because of friendly fire. But this helped put things in perspective. Thanks again.

Biggest things I kept doing wrong going from tank to ranged were:
-pulling too many mobs using ranged
-placing myself in front instead of behind
-not venting heat because muh hp
-prioritizing specials over more immediate threats
-not using my ult nearly often enough

So don’t do those things. Also I find the beam staff absolutely no fun to use and prefer literally any other one. It feels like I do better with a fireball or conflag staff, the regular boltshot serves me more than well enough for specials. Note that I only played post beam-nerf.