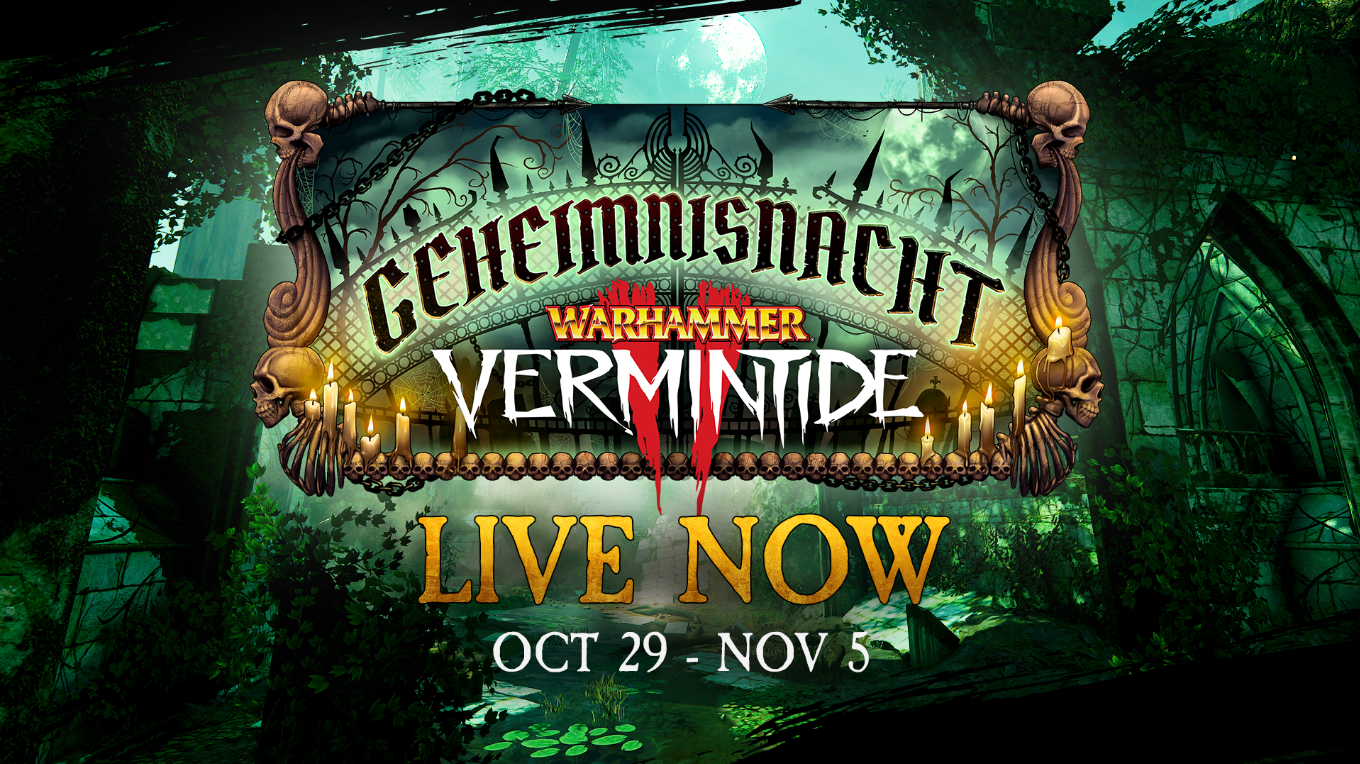 The Night of Mystery

Geheimnisnacht is the most ill-omened night of the year and with both Mannslieb and Morrslieb full in the sky only the strong and brave dare venture into the dark. During Geheimnisnacht it’s said that the veil between the living and the dead is thinner, and it’s the perfect time to visit the Gardens of Morr to pay homage to the ancestors.

Geheimnisnacht will be live for PC, Xbox One and PS4 between October 28th until November 5th.

Currently, we are working hard with bringing Winds of Magic to console in December, and due to this, we decided to host a smaller event during Geheimnisnacht. Dedicating our resources towards Winds of Magic is a higher priority and we are grateful for your patience.

nice. i love these night maps. cant wait till im off

Looks like this patch broke some of the mods. The game crashes after pushing inventory button. Or it could be previous patch, cant say for sure, didn’t played some time.
P.S. It is loadout manager.

The previous one Adeon.

This is very good. But the bug wich let bosses deal damage through shields if bosses are really near the player (even if within shields’ block radius)… is fixed too?

Thanks from me and all my xbox buddys

today all day when starting the game, writes “server error”, I don’t know what to do.

—> please at least use “Google Translate”

“For the whole day today the game says “server error”, don’t know what to do”.

“Have you downloaded the latest update?”

Is there a new portrait that can be obtained by playing with a player that already has the frame? Or is it the same portrait as last Geheimnisnacht? I’m asking because I got an email from the subscription service saying there is a new portrait and showcasing it, but it looks identical to the previous one.

From that text I gather that it is just the same portrait that can be shared again? Did I understand it correctly?

^That’s one.
The other portrait is obtained via 10 QP Missions.
Just look it up in the game! An Event is live!

Thanks for the reply, but I already know about the green frame. I was wondering if there is a new frame that could be shared the same way as the old vampire frame from last Geheimnisnacht, or if it was just the old frame that became sharable again.

If people can get the old vampire frame by playing with someone that is wearing it now, then there probably isn’t a new frame that can be shared in the same way.

No. It’s the same as last year!

Ok, thanks for clearing that up for me. ^^

I don’t know, but you changed something about floorboards, if i’m not completely mistaken… They have way more gaps inbetween. It’s a bit - i can’t find a better word - ugly in Kruber’s quarters.

I dread to think how broken this patch is :pumpkin:

Dedicating our resources towards Winds of Magic is a higher priority and we are grateful for your patience.

I wonder when I’ll see a Fatshark’s message like “Dedicating our resources towards dedicated servers is a higher priority and we are grateful for your patience.”