Yep, I know… but also if you stop the charge, the animation that returns the arm to the starting position, it’s takes one second. And this is one only of the talents nerfed post beta (from 5 to 3 seconds; or better from real 4 to 2 seconds).

In this new gameplay tanks are useful; it’s one of the 2.0 advantages… I’m not saying he’s trash. But “beta version” was more balanced imho.

Yea, that’s like 3 pushes and then you still have around 6 stamina to spam more. Block another hit and you have full stamina again while spamming free ones. It’s broken to all hell xD

In two seconds you can’t do nothing. And nobody wait for block in an horde becouse the enemies surround you. So you block when you cant push no more.

Also because (imho) the best way to stagger is mixing heavy attacks (shields or 2H hammer) and push; in this way you can valorize the only FK’s advantage: the attack speed. Stop all this to wait that someone attacks you to block… it seems counterproductive.

Few changes are enough to give to FK that little he needs. So, without thinking too much:

In two seconds you can’t do nothing. And nobody wait for block in an horde becouse the enemies surround you. So you block when you cant push no more

I don’t think you understand how it works… it doesn’t matter how many enemies are around you. All you need to do is block one attack and then spam pushes. Also, with 80% BCR and the shields passive reduced cost, nothing can break you. You can even block Boss attacks now in WoM. With the shields area of effect on pushes, you will stun lock everything around you. 2 seconds is enough time to throw an entire horde on the floor.

I might record a video to show you guys… as you don’t seem to understand just how powerfull it is. Also, be aware, FK charge will put agro on you from any mob you hit. Charge into the horde, or patrol, take agro, take one hit, stagger blast everything, taking more agro, repeat. Keep in mind, with opportunist on the shield, anything attacking you will be set to fully staggered. Meanwhile, normally, 2 pushes will knock nearly every mob directly onto the floor. Again, you won’t be doing any damage, but you can not die and are able to stun lock everything.

I don’t think you understand how it works… it doesn’t matter how many enemies are around you.

I know how it works. Are two different things. If you stop to block (and trigger the two seconds free stamina) inside an horde, you could be sourrounded.

I might record a video to show you guys… as you don’t seem to understand just how powerfull it is.

But it’s too situational… a talent (+20% BCR) useful only if you use that build. I love to use attack speed and stamina to be more aggressive. I don’t feel that it helps me or my friends. If it was +30% like during beta, it would be already better.

I’m not saying that your build is bad… but FK particularity is his mobility/attack speed. If I have to wait to block an attack (that on paper could be easy, but there could always be some surprises, like your teammates that, attacking staggered enemies, will take their aggro) just to have “free push” seems to similar to IB. The dwarf, with a crazy +80% stamina regen, can push all day without wait to block (so without losing time).

Moreover, in this way, you “waste” every talent about attack speed.

I know how it works. Are two different things. If you stop to block (and trigger the two seconds free stamina) inside an horde, you could be sourrounded.

It doesn’t matter if you get surrounded XD Sheild knocks back everything in front of you and to your immediate left and right. Only the stuff that got behind you would be an issue. But you’re not losing any stamina, just turn around and slap them back as well. But that doesn’t even matter, you still block things behind you as well. That’s the whole point of this build. All those mobs behind you are doing is proc’ing your unlimited push talent even more. Again 2 pushes will knock nearly every mob on the floor. If you really wanted to cheese it, you could throw Push block angle on it as well. Then you can push everything around you in a 360 degree push lol. There’s a reason people use this build for weaves 100+, where clan rats can 1 shot you.

Also, on Cata, you don’t need to stop to get hit. Spear boys will poke you constantly. The entire point of this build is to never really attack, you hold block the entire game and just smack things and pick up/protect your team. If you really wanted to, you could just walk to the end of a map with your shield up. GG

Seem to be a lot of people not understanding the value of unlimited massive pushes that knock everything around you on the floor. Here is me experimenting with him. He is unkillable to all but specials. I’m aware that this is not indicative of the main game as there are no specials. However when you’ve got your entire team behind you destroying enemies while you control entire patrols of stuff the game is a cakewalk. We steam rolled cata with this guy as the glue for the whole team that creates the space for everyone else to destroy enemies at low risk. I rezzed all other players with a full horde and minotaur beating down like a didn’t give a toss. It’s a low skill style but it serves the team well. Also I don’t play foot knight as a main. 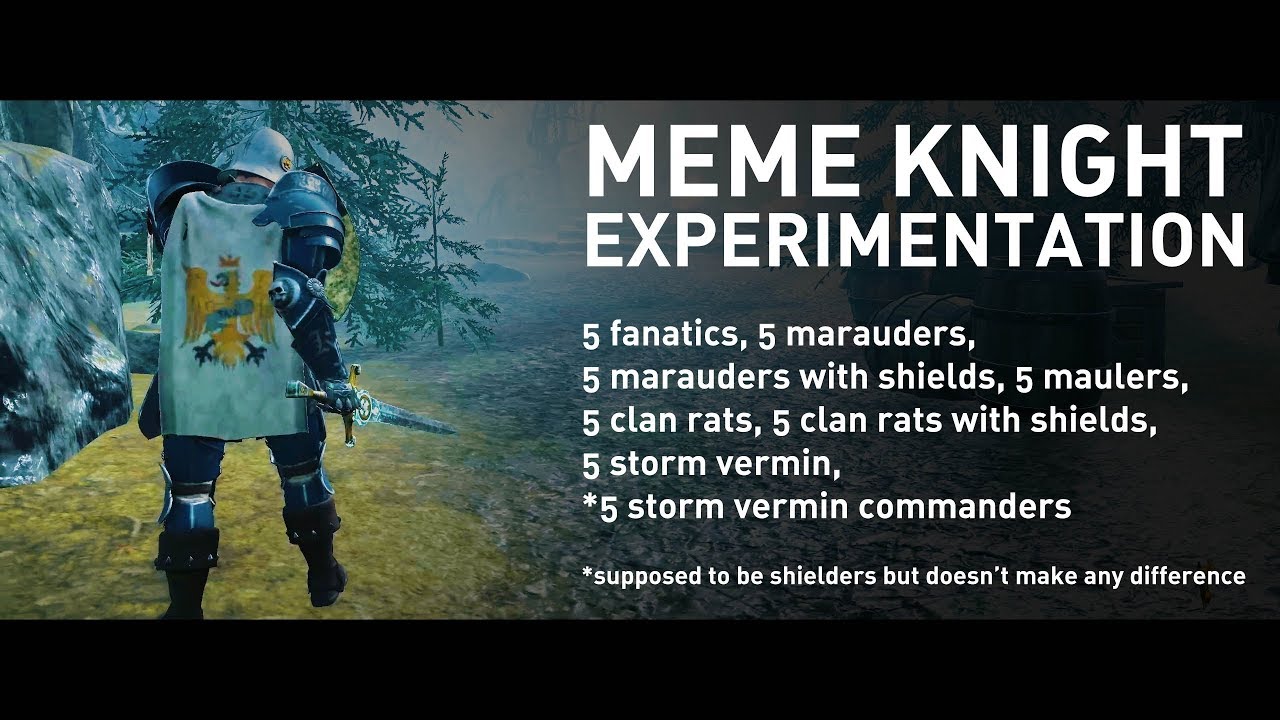 Guys, a real match is different. Be immortal in a corner doesn’t help your team and doesn’t lead to victory.

The video (anyway interesting, thanks for sharing it) shows it: you have to push, block, wait for an attack… and the enemies have blocked you in that corner. An IB, with +80% stamina regen, can push without pauses. Not to infinity (like corner-tactics seen above), but the time needed to your allies to kill the enemies without see them push toward the team (how it happens in that video because of the pauses necessary to block an attack).

But apart this, everything that happens in the video… it’s about a single talent. How can’t you see the bad synergies between talents?

p.s: I’m not referring to the author of the video, I’m speaking in general

Please guys SHUT UP they’ll nerf shield into the floor.

In seriousness, @arknox video shows everything you need to see really. Add in some charged shield bashes and you could’ve killed things a little faster but hey, minor details.

Specials completely muddy the water though.

Thanks. Yeah could have been a bit faster taking some risks to do shield bashes but I’m an elf and saltz main that up until that day had never used a shield because they have always been terrible

Here, this was posted on the reddit. Shows you just how insane this build is lol… He can just stand on the respawn point in SkitterGate Boss fight and not have to worry about anything. Just picking up his teammates to do some DPS when they reappear xD 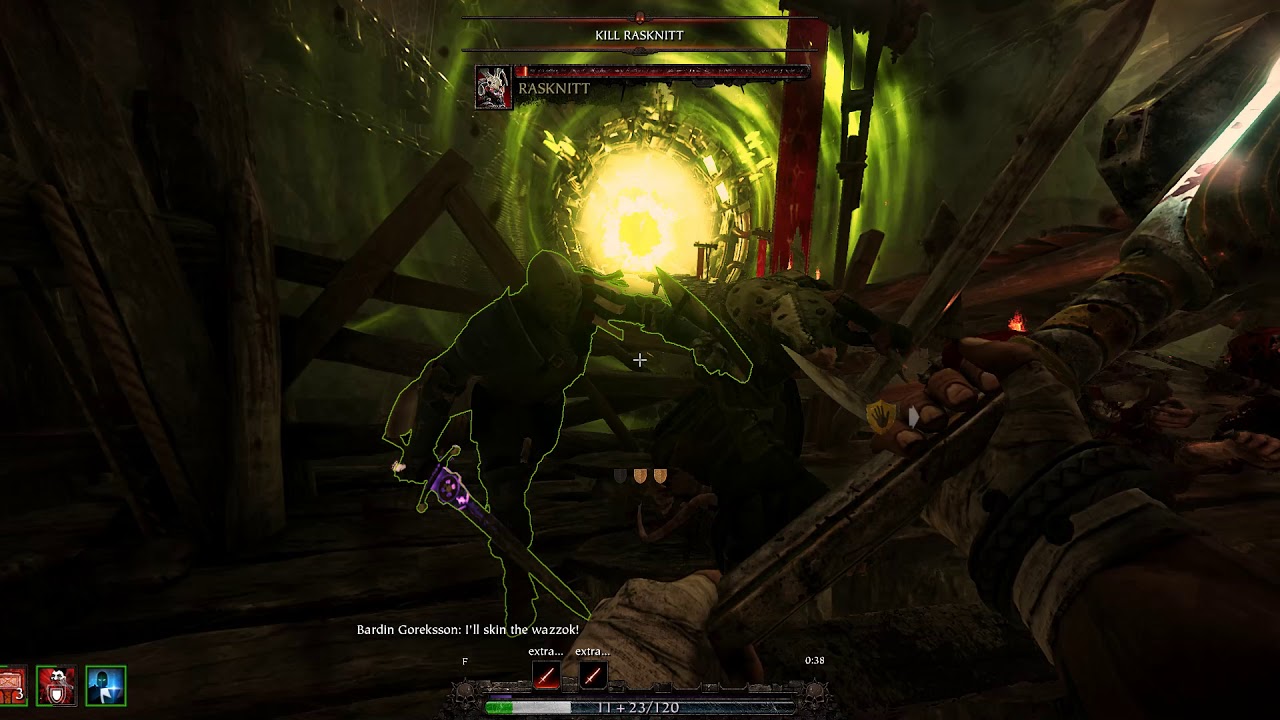 Yes a real match is different. You’re not in a damn corner because your team mates are killing everything.

When you wait to block an attack to trigger the talent, enemies push toward you. This doesn’t happen with IB so, even if he can’t stay for so long in a corner, he will help more your team.

No, they stand in front you piling up and actually barely attacking most of the time. You can entirely stand your ground as foot knight wherever you want as long as you have at least a competent team thinning as you throw everything around. The thread isn’t about iron breaker. He is obviously very good as well. Bear in mind we steam rolled cata with this build. Only thing left to do for us is FoW

And anyway also Skittergate video shows it: this talent (because I repeat: all this just for ONE talent, think how much the others are useless) let you to “exploit” some situation (Fk waits in the respawn point, while other careers just kill, die, respawn… nice tactics). It doesn’t help so much in real situation.

Thing that you can do also as IB, thanks his +80% stamina regen, without wait to block an attack… but anyway, let me know a thing (and I’m asking this also to @SmokerT69). Are you saying: “FK has nice talents”, “FK is very good and balanced” or “FK must be nerfed”? Just to know how I should reply xD

I would say he has a place now when he didn’t before. He was supposed to be a tank but was the worst at it pre WoM. You can build a high DPS dealing fast attacker with him now or a massive shield wall block and push machine. He’s interesting where he wasn’t before. I don’t think he should be nerfed, he’s obviously weak to specials and if you go full support for the team you massively reduce your own DPS. He’s in a good place for a game that’s supposed to revolve around team play now.