Briar Javelin as a Melee Weapon

I seem to remember that this suggestion has come up before in the nearly a year since the release of the Sister of the Thorn, but I figure that it cannot hurt to repeat it on the off chance that it inspires the developers in some fashion.

There may be balance issues with how extremely effective Kerillian’s briar javelin is at the moment, but considering only the aesthetics and usability of the weapon, I think most players would be in agreement that it is a pure treat. The design, visuals, animations, and general feel of the javelin are fantastic – so much so that I think it’s almost a shame that I cannot use it as a primary melee weapon. Maybe it’s just my impression, but I feel like the Sister of the Thorn is almost designed with the briar javelin and deepwood staff in mind. Her visual look and character animations look best with these two weapons, and I would love nothing more than to be able to use the javelin and staff together. Not because of how powerful the combination would be – I wouldn’t mind it if the hypothetical melee variant of the javelin was objectively suboptimal – but because out of all of Kerillian’s weapons, the briar javelin and deepwood staff fit the design, aesthetics, and the overall fantasy of the SoTT the best.

Am I alone in this? I would be over the moon if we could have a melee variant of the briar javelin with the same models, sounds, and largely the same animations as the ranged version. Maybe there could even be a (weak) throwing attack on the weapon special button, similar to the way Saltzpyre’s rapier and pistol combination works, but I don’t think even that would be necessary. None of Kerillian’s current melee weapons, not even the elven spear, are such a perfect fit for the Sister of the Thorn as the briar javelin would be in the melee slot.

Yeah, I remember being disappointed I couldn’t use both. After all, Kerillian already has an amazing ranged arsenal (also a melee one, to be fair) and I’d have enjoyed the possibility to play with two unique weapons.
I don’t think this is a likely change, but it would be interesting.
You’d definitely need to be able to block if it was a melee weapon though.

Indeed, I’d love to be able to use both the javelin and deepwood staff.
I only wonder how could they differenciate it from normal spear we already have. Possibly make it weaker but with faster attacks and less swipes/CC plus the aforementioned special attack.

Edit: Or they could just go for Saearath (The double bladed spear) 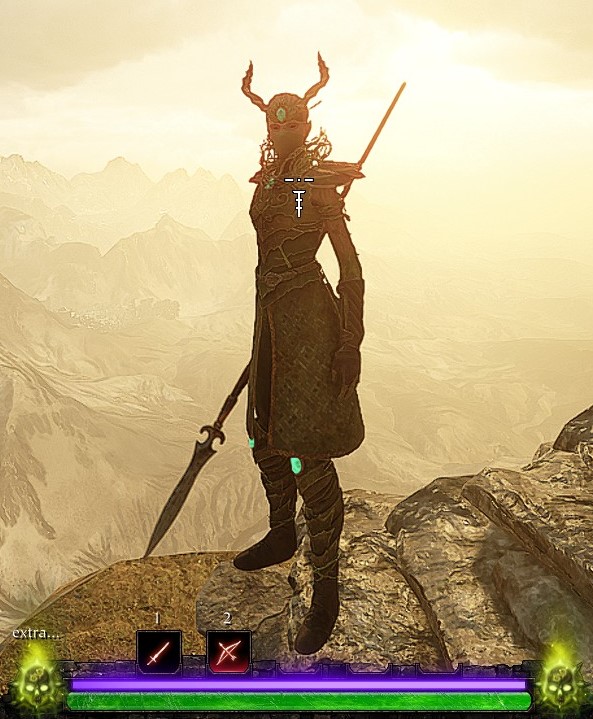 The more I think about it, the more obvious it is that it’s the animations and poses when using the briar javelin that make it look so awesome. The Sister’s entire outfit looks the best with this pose, and it’s a crying shame that it’s not available for any melee weapon. Honestly, I would settle for having this animation set when using the elven spear – although I also think that the visual design and proportions of the briar javelin are far more appealing than those of the spear.

I know it’s not the same thing that you are proposing, but if you really want to try that combo now, go into modded realm and do it

Yeah its a waste that the spear most oriented towards stabbing isn’t a true melee. Though it is fast and spammy with great dodges like dual axes already so giving it sweepy moves would definitely necessitate slowdown on those moves (like dual axe heavies slowing you down for the mighty ability to hit 2 trash enemies). But yes since the elf only has the elf axe for melee weapon DLC beyond the class exclusive spear and shield its warranted. She has a large variety of swords why not spears. There could also be a downward thrust for another heavy, since no spear incorporates that.

Full agreement there. The addition of some kind of a sweep attack, and the ability to block, which are both absolutely necessary for a true melee weapon in this game, would require adding slowdown effects to the attacks. It’s why I wrote in my initial post that I would love a melee variant of the javelin with “largely the same animations” as the ranged version. @Rodo’s suggestion of simply putting the current ranged javelin in the melee slot in modded realm, while a cool and fun idea on its own, is not quite what I had in mind.

I’ve got a meme build for a ‘Javelin only’ Handmaiden on Legendary difficulty.
With proper breakpoint calculation you can 1 shot melee any horde mob, and since it stabs through multiple enemies, you actually have semi decent wave clear. You can also still maintain the 1 shot thrown breakpoints for Stormvermin + any special.
The only problem comes down to not being able to block, at which point Handmaidens dodge passive helps massively.
The build plays like a highly mobile dancer, dodging horde attacks, picking off elites and dashing out of combat if you get overwhelmed.
I would definitely not try it in cata, but its a fun meme for legend book runs.

You know what else needs to count as melee weapon?

It did, but that got taken away. I had a few games with vaul’s anvil taal’s arrow and morgrim’s resourcefulness trollhammer with grenadier, was peak not bush elf in the mode possibly at the time. But now its a melee weapon trait.

When did it ever work with vaul’s?

It wasn’t changed for a couple months after CW coming out because it was present on the Xbox1 version when SoTT launched there if I’m remembering correctly. It was fixed like the update after that.