BOT AI Can not path out of area damage ground effects

I have several clips of this saved for bug reports. I was too slow many more times to record the worst of it.
Instances of bots just stood in Stormfiend fire or gas rat poison and not leaving it.
The bots just stand inside it until they are dead.
At which point another bot generally walks over and loses most of their health (They would certainly die too if not for the grace of limited duration on the area damage effects) to revive the fallen one.

This isn’t a 100% repeatable thing, but it’s VERY common.

It feels like because pathing OUT of the damage requires walking THROUGH the damage the bot just stands paralysed. Coded not to walk on area damage, yet already stood on area damage and needs to walk through more of it to get to safety.

I suspect this is why bots just stop moving if they ever get stuck in a Khorne blood tornado in the chaos wastes (although it doesn’t explain why they don’t avoid other area damage effects in chaos wastes).

Here is a video example anyway: 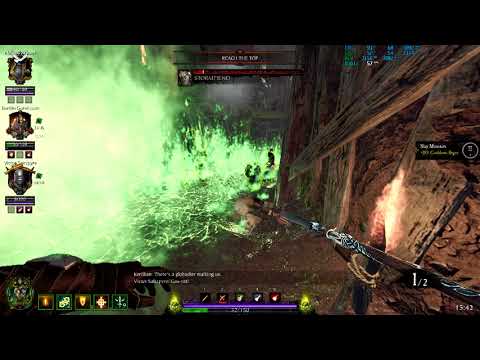 I’d rather not have to upload them all to get the point across, rural internet isn’t great on upload speed.

This has been a long-standing issue for me as well, with bots standing still in area damage and making no move to either remove the source of the damage or escape it. In some cases bots will approach a downed ally who is in area damage and then stand beside them motionlessly, as if waiting for the damage to stop before attempting to revive; this also frequently results in them going down.

I feel bots sometimes show similar behaviour with fire rats or gunners, where they’ll stand still in danger and lose all their hp without doing anything, but I’m not sure if that’s related.

Yup all too common, at this point I just hope Darktide doesn’t have ground effects, as I’m not expecting this to be fixed.
What’s weird though is that enemies don’t seem to have this paralasys of pathing that bots do, so its clearly a conflict that’s been added to the base AI.

I feel bots sometimes show similar behaviour with fire rats or gunners, where they’ll stand still in danger and lose all their hp without doing anything, but I’m not sure if that’s related.

It makes me wonder if this isn’t the same issue as certain bots getting stuck in their ult.

The bot is assigned the task of “walk over to that gas rat with your gun out and then switch to melee and hit it” and that’s what it will try to do. The bot doesn’t care if it’s taking damage, flames, gatteling fire, horde, monster, they don’t care they’re not programmed to. But that code has them locked into this incredibly dumb action and nothing will stop them short of their death/disabling or the death of their target.

It really does feel like 90% of bot bugs are because bots never have a timed callback to reasses if their previous objective is still the right one or if it should be cancelled or changed. Especially when it comes to bots trying to melee a gas rat that is so far away that they will teleport before reaching it, then try and run back to it, over and over and over and over again.