I was just wondering … wth is going on with the “RNG-mory” . In the last couple of days i’ve been getting only weapons under 400 rating. My highest melee weapon is 493 and ranged is 486. Curios 125. My level and equipped gear doesn’t affect the armory whatsoever ? (clearly not)

The highest i’ve seen was a 407 blue eviscerator. Even the grey items from Emperors Gift never surpass the 400 mark.

I’d recommend focusing on the “base” rating - the rating for just the stats - when judging items.

It’s often more worth checking the store for white/green items than it is only checking blues.

This is the highest base secondary I’ve found, and I don’t really like the gun and just grabbed it as a reference point for how high the shop will roll, and I’ve probably only seen it go over 360 twice. 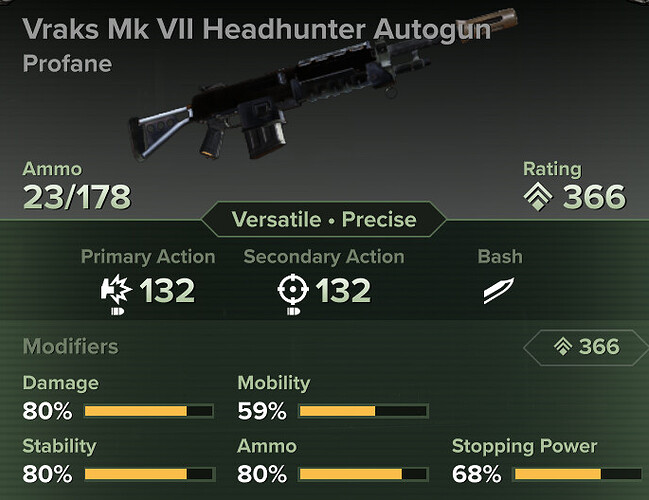 Typically blues, even with good bases and good blessings aren’t going to go over 420-430.

We just need better crafting, and the systems we’ve been promised to be actually functional. How did this all launch in a significantly worse state than current V2?

Edit: I noticed I have this for a primary, so the store can go over 370 base. 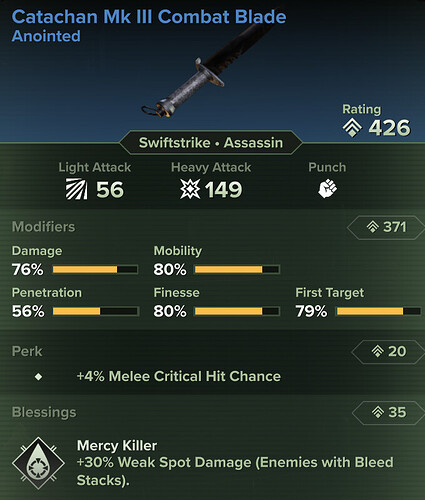 Armory was nerfed in [almost]full release.
Not only you cant see any gear that exceeds blue rarity = lower power ratio = lower stats[as the power determines how many stats will be distributed to it’s statistics bars].

= Everything as planned… or kinda like it.
You know they were really pushed a lot to not delay the game launch[tencent & other things…probably mostly Tencent as they’re not bad at giving “helpful hand” they also want results & those results are “described” in any currency that is in use in our world.]

probably it will be described not as patch notes but as DLC or alike… you know tencent loves money. You know simple psychology catch you play you get purple & orange stuff… you dont play you can see only blue… you dont play you dont have plasteel to upgrade & if you play you have it… a little of it… we nead you to play to not lower playerbase even more

you know marketing stuff & all alike.

That’s your answer to the stats & rarity of items & why it is like that.
Uhhh ohh… I played now probably like ~150+ hours… with 3 chars to lev 30 I probably got “catched on it to” xD