A word to the wise

Good morning all, a word to the wise and just a suggestion.

Please for the love of sigmar stop nerfing hero’s, this isnt the way,

You guys are about to bend the knee and make the biggest mistake of your careers by nerfing the elf and nerfing illusionist monsters,

All the negative feedback regarding the elf comes absolute trash players, instead of nerfing the elf why don’t out just rework difficulty scaling for example cap hero power on lower levels for the invalids and champion and legend elbow lickers so that the actual hero outputs less damage.

I’m trying to warn your team nicely now, it’s not by mere chance that the average player rate per weekend is now dropping to below 2800 online during the weekend.

You guys are turning your back on your long time supporters for filthy champion players with less than 100 hours just let that sink in.

You want to cater to actual trash who only spend about 100 hours on the game before returning to whatever whole of a community they came from on steam. DO NOT REWORK SISTER OF THE THORN.

I swear this is your last chance fatshark please think about this, if you guys ruin this game I will not be supporting darktide. STOP NOW

This is satire, right?

No, now is the age of nerfs. I will not relent, I desire nerfs above all. You will not dissuade me with your petty wordplay, little man.

‘Make the heroes do more damage so SoTT feels less out of line’. Nah, just simple QoL and balance the SoTT/Forgotten Relic weapons. Shade crits on demand at like 16s cooldown in combat also should go, or at least have a cooldown somewhere near fervency.

After that I dunno vanilla weapons without comboes through their lights/heavies feel really dated. Like the falchion, that L3 locked behind 2 meager swipes.

Ok this must be satire at this point. Most of the calls for nerfs here come from players who have multiple thousands of hours and generally play modded content, if not at very least Cata. Take a look at the Onslaught Tourney where the mod used for it hard nerfed SotT and she still got used plenty. If C3DWOns players are what you call scrubs I don’t know what to tell you lol.

You’re so far off base here it’s legitimately funny.

Woow i never thought one person could embody such a wide variety of stereotypes,

Hmm, wierd i see a corelation
i’ve gotta ask…
are you perhaps a flatearth´er too?

Brother, you’re in the wrong neighbourhood…

If C3DWOns players are what you call scrubs I don’t know what to tell you lol.

Not even C3DWONS at this point, C3Spicy is the new gold standard. 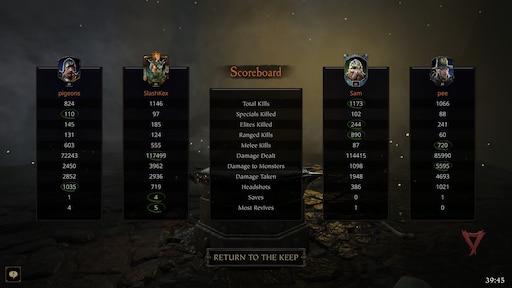 Steam Community :: Screenshot :: Bell on the C3RealSpicy with tourney balance

Buffing things to match SoTT would trivialise things even more. It could be argued that the power creep has actually damaged the higher end of the player base more than anything else, as I know a fair few high level players who simply don’t play any more because SoTT and Moonfire/Javelins make the content laughable unless you play in fairly ludicrous modded realm stuff. I’m pretty sure I’m not alone in losing friends who don’t play purely because the power creep has put them off.

OP’s own arguments contradict each other. You cannot buff all the things and somehow make content more challenging as in fact, there are people playing Cata who only pull it off by pressing F and shooting a chaos warrior in the air with plants. Or an entire climbing SV patrol. Or throw a javelin 1/4 mile and kill a ratling or something.

In fact, I’m going to do what I do best and advocate for the nerfiest nerfs that ever nerfed. Hell, I still think Mercenary ULT giving Damage Reduction across the entire party is too strong…

just let that sink in.

Why, what does it want?

Someone´s gotta have some dirt on their hands if a sink comes over to visit.

Good morning all, a word to the wise and just a suggestion.

Please for the love of sigmar stop nerfing hero’s, this isnt the way…"

Under any other circumstances, you might have had a point there.

A bit less than a fourth or so of the forum regulars are people playing or even solo’ing modded difficulties way above regular cata, a few even record it, and another but larger portion of players like myself have only played cata since it was released while occasionally playing modded cata+ levels.

These two groups combined should be half if not more of the forums active population, and what do we all have in common?

We´re all asking for nerfs and reworks for a lot of stuff, with SoT being the main target.

So in other words, sir.

DO NOT REWORK SISTER OF THE THORN

I have to agree here. Rework won’t help, just delete the career and create a new one for her.

You guys are about to bend the knee and make the biggest mistake of your careers by nerfing the elf and nerfing illusionist monsters,

what did you expect this post to do lol, it’s just a vague threat with no logic, and a meme assertion that modded players are leaving because sott is going to get nerfed?

SoTT and Shade mains rise up!!!

DO NOT REWORK SISTER OF THE THORN

I have to agree here. Rework won’t help, just delete the career and create a new one for her.

I even have an idea for the proper replacement. The Phoenix Guard. An armored tank who uses halberd, has access to fire attacks and, most important, keeps her mouth shut.
100 times better than that bush elf we have now.

I still want a Shadowdancer T_T

Might overlap with shade but on the other hand, any fighter/tank will overlap with handmaiden so its fair game.

The biggest argument for it is that as a priestess of the elven trickster god she´d actually gain a more normal but still elfish sense of humor that she´d apply generously. Like putting Bardin´s socks in the stuffing for Lohner´s pillows.

Or replacing Saltz’s holy water with something that has a lot more alcoholic content, y´know, to lighten up the sermons

You can’t use these two words in one sentence, make up your mind.

Meh, I think they needed to maintain a balance, with High Elf and Dark Elf being on the extreme and Wood Elf in the middle I prefer to still have 2 Wood Elf over 2 “Evil” or 2 “Good” career
Waystalker: Kurnous
Handmaiden: Isha
Shade: Khaine

Shadow Dancer: Pushing a more neutral side with Loec, can even have some magical abilities from Ghur, Ghyran or Ulgu

Spellweaver: Either using Quyaish or Dhar to fight, no God are really associated to them iirc

You can’t use these two words in one sentence, make up your mind.