After you tweeked the sounds again, there are almost no sounds at all. Hookrats just keep saying the “catch-catch”, assassins are not warned by the heroes, it just pops on others, ambushes, hordes, bosses in complete silence. I played a few games yesterday and the last 4 had none of them. Ultimate abilities’ sounds go out with seconds delay.

Checked the integrity, restarted the game as well. No change at all.

You cannot hear if a beastmen stuff walks behind you because they wear soundproof socks, in water you have walking sound like you have to have when walking in water, but enemies… not.

This is not related to heroes, maps, anything, my last 4 games went like I wrote above.

Please make sure you’ve ran through the solutions here. The latest Windows update has been known to change some people’s audio channels.

Thank you, Julia. It’s is not that sound configuration, or the update, I’m sure of it. It happened after a period of time of the Win update, and exactly after the sound fixing patch.

I dont think a global sound misconfiguration of the whole system can cause only silent beastmen ambushes, or bosses without proper notice.

Just to let you know, i kept the forum opened while I was playing after the sound patch. I copy this from the post of the patch’s announcement from this forum.

This patch is so good, that today’s first game began with a silent Minotaur, and a fully silent ambush.

Last edit: did around 10 matches since 2.0.9 and almost all of them, I repeat almost ALL OF THEM (2 did not, because we had no surprises for some reason) had silent ambushes. Did integrity check, quited, relauched, restarted the steam, even the pc unneededly just to be able to tell you, i did everything. Seems the only solution is uninstall until a stable version comes out.

What kind of fix is this? Are we going to get back to alpha? Unchained ult on max overcharge once popped, other times not. Is it became a random stuff too?

I grew impatient, we gave feedback on bugs, especially on sound bugs and on many more, and the patch that meant to fix these causes more problems. I dont know what are the programmers do, but since 2.0 came out the game is a mess. The forum filled with bugs and unsatisfied people. Before WoM I enjoyed to play and now I get stroke from the bugs, the “Oh look, is a minotaur in my back?”, hoping not to see beastmen because in 1 enemy there are 3 (you see 1, but if you kill it, it opens like a flower and voilà, it “was” 3in1 like nescafè - sadly less enjoyable). If you can kill them, if they dont ignore the push or IB’s shield and axe’s first heavy completely. Depends on their mood I think.

Please, can you just create a PTR where these patches can be tested? I honestly, gladly be a guineapig in PTR rather than in live version.

Sure, I can pass this on to our Audio Engineers.

Have you made sure it’s not the speaker setup issue that came with latest Windows update?
You have to open the options menu in Vermintide and choose Speaker output from “Auto” to “Stereo” if your using headphones.

Let me know if that makes things better.

Thank you for the tip. Unfortunately it didn’t solve the problem. How can speaker setup influence some specific sounds? Anyways here is a short video about what I wanted to point to: 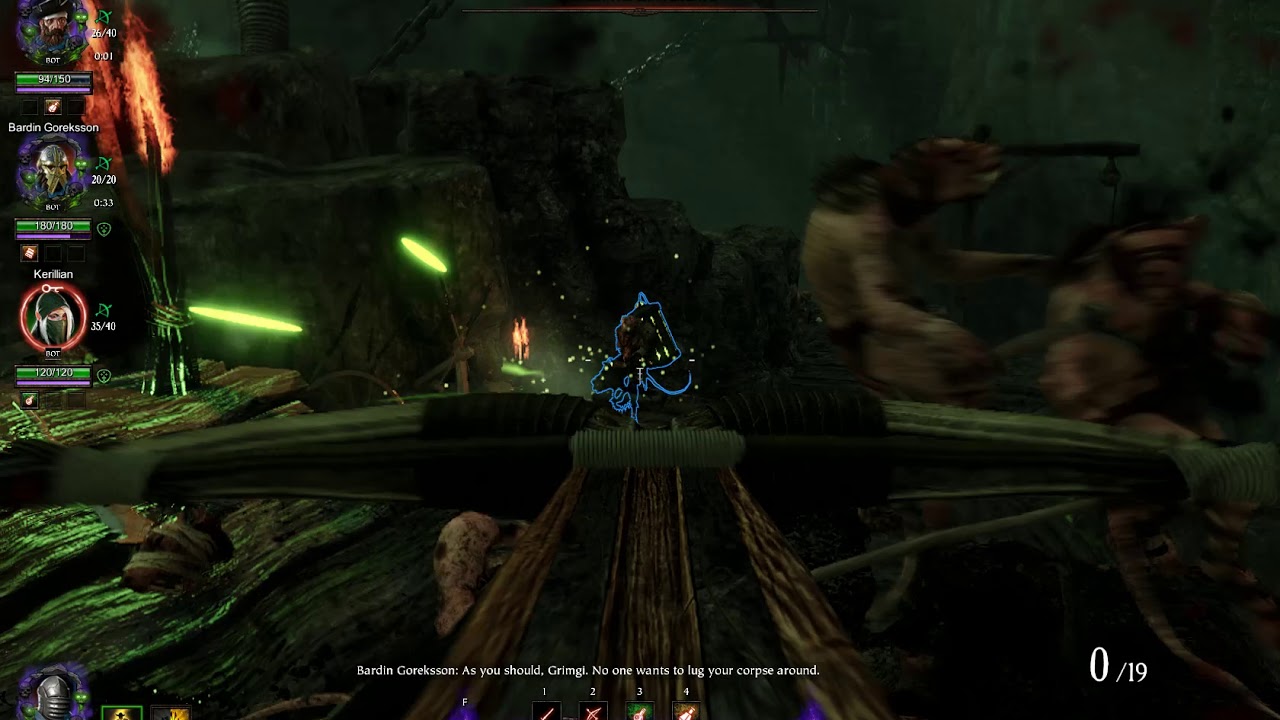 As you can hear, the first assassin had a bit of hissing, but the second had nothing, just the jump, and the dying sound. No “hey! There’s an assassin, look out!” as we got used to, no “Always sneeking, stabbing”. Hook got the warning, only when tagged. On this special spawning location you cannot see, or tag the globadier, or rattling but heroes warn you, that there is a gasrat/rattling. It was an ambush by the way, I can hear something in the background, some music-like stuff, but it had no vermin shouting when it started. This is why I began to record in mid-fight.

The rattling after jumped up, he began a moving animation, or streched his leg, I don’t know, nowadays they usually do this “bait”, as SWs almost always looks in the opposite direction, when I shoot, so they dont get killed by headshot so easily. Hooks step aside when near, and aimed at them, this way they dodge the shot. Kerillian’s voiceline becoming false when she says “These vermin never learn”. Oh, they bloody do! I kind of welcome it, something interesting happening in the game.

Here is the audio tab what you asked me to check:

Next time me and my bots try to get the godmode hookrat, a very common but interesting species that cannot be killed by a rattling, even when it targets the player who is grabbed by the hook, and it pulls the focused player towards the rattling in a straight line.

Another audio stuff: Olesya’s voice actor hasn’t repeated the good job on WoM, her voicelines are simply annoying. Not just for me, for lots of my friends as well. We love, that in Vermintide you actually can feel the mood of the caracter you play, because the actors did a freaking good job. All of them. It’s not like the usual “Warning. Missile attack confirmed” on the same tone, no life in it as we can see in sooo many games, even the in the dialogues. The actors made the bloody Ubersreik 5 (or 4, it doesn’t matter) kind of living creatures of the keep. I dont want to hurt who had impersonated Olesya, but when the BtU DLC came out, she did good on the loading screens, and in-game as well. But this “collect their essence” lines are just not on the same quality as a voice actor, like the rest. No life in these lines. Just like you read that the shop is closed due technical issues.

Any reactions to the footage I gave? Ot just this important the feedback what the players give?

Hey! Thanks for the details! (Sorry for not responding quickly)

We have a big sound update incoming where we did an overhaul on the sound mix to make specials easier to spot. Please let me know if these problems still occur after that patch.