A new career for Bardin.

Hello, dear developers and players. Now I am very impatient because of the expectation of a new career. I am very much looking forward to this update, so I would like to ask the developers and other users a few questions.
First, given that the announcement of the alpha test was in early August, could you guess/give a hint when to wait for a career exit? I want to believe and assume (I really do, I’ll cry if it’s later) that the career will come out in mid-September. Well, maybe at the end… Please confirm this or deny my hopes.
And second, I’d like to ask the experts in the Warhammer universe… What do you see as possible in terms of knowledge and playing career, other than rune Smith and an engineer? I would really like it to be a rune Smith/engineer shooter (I love long-range combat), but what if there are other options?
I want to once again Express my great gratitude to the developers. I love your game and our strong community. And the expectation of a new career makes me sleep badly, very unbearably.
Thank you for taking the time to read it and forgive me for my English, it is very bad.
Good luck and health to all. Thank you all in advance for your answers.

And second, I’d like to ask the experts in the Warhammer universe… What do you see as possible in terms of knowledge and playing career, other than rune Smith and an engineer? 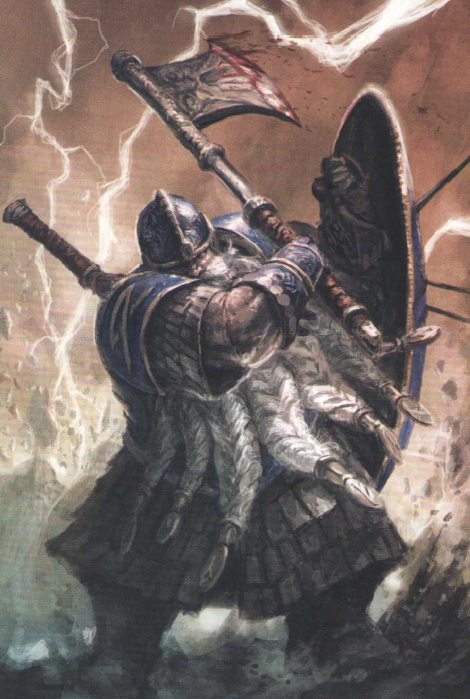 Dwarf Longbeards are the oldest and most battle-hardened warriors within a Dwarf army. Highly prestigious individuals, these Longbeards garner great respect within a Dwarf stronghold, and are often chosen to be the leaders and advisers of many...

can have an open-face helmet and beard reaching knees, so it’s not too similar to Ironbreaker visually. And a lot of Ranger Vet helmets would suit Longbeard better instead.

For weapons - there’s not much interesting ideas, maybe a longer two handed axe, with the same length as dwarf’s body. A dwarf-sized halberd or pollaxe in other words.

I think engineer or runesmith are more interesting picks, especially runesmith. But engineer also can be made pretty unique due to dwarfs ability to invent in Warhammer (the guilds though are stagnant, the majority of dwarfs are very conservative), he could be different enough from Ranger Vet.

For example Malakai Makaisson from Gotrek&Felix novels, he made a hand-held minigun, a shoulder fired rocket launcher and a huge airship! He was also considered mad, and he was a slayer.

I’d like to hose down rats with a minigun as an ultimate, the Doom dawi playstyle would be complete with this.

Longbeard are aged veteran, you can’t simply join it by being a great fighter

Another fighter career could be the Thane, that is a career (finally one of the Heroes level career of the Dwarf) that exist a lot (Most Hold have a few working around), the lore behind it could be about Karak Zorn, a lost family/ Clan whose shame is to be absolved.

Longbeard are aged veteran, you can’t simply join it by being a great fighter

FS made Krubs a Bretonnian because reasons. They could do the same for the dwarf although I hope they would restrain themselves.

I’d be worried if they end up adding something that’s not an engineer, thane, or runesmith, else they risk treading onto already occupied niches.

Which unlikely Career would you like to see in the game? Fatshark Lounge

Hmm. For Bardin I guess these are for me the sensible options: Hammerer Equipped with a runic hammer. Difficult what role would fit. Lorewise a real Damage-Dealer. Runesmith Sounds cool, but a pretty ancient role and Bardin suddenly turning out as one would be odd. It would be a very good Support-Role tho! Nothing else would really stand out. Maybe a Dwarf Engineer? Or give him a damn Gyrocopter, that sounds fun.

I’d prefer something that’s not an engineer tbh, that has potential to step on RV’s toes

FS made Krubs a Bretonnian because reasons. They could do the same for the dwarf

There is a difference:

Kruber had Bret ancestor, which is something that is somewhat possible (there is more immigration to the Imperium/Marienbourg even for small noble) and does not change what we know to do that (What his ancestor was does not block the other career)

Bardin as a Longbeard would change pretty much all that we know about Bardin:

Don’t get bogged down in the specifics. The point is that FS doesn’t need much justification to do whatever they very well please. Making Bardin a longbeard would certainly be a farther stretch and I’m not a fan even if it wasn’t simply on the grounds that it might be tricky for it to stand out among an already frontliner heavy lineup.

I’m no lore buff (far from it) but at this point I’m more concerned about adding cool stuff and expanding on what the characters are capable of than playing it 100% safe from a continuity standpoint, hence my preferences for thane, runesmith, or engineer.

The potential careers for Bardin I can see, and being relatively lore friendly, are; Thunderer, Engineer, Hammerer, Thane and Runesmith.

But only Thane and Runesmith are kind of going in their own direction as Slayer is Slayer, range and stealth and done with the ranger and heavy melee are done with the Ironbreaker. A Hammerer is essentially when it comes to fighting a fancy heavy infantry soldier with a two-handed hammer. Something that the Ironbreaker can already do. And a Thunderer would essentially be just an un-stealthy Ranger Veteran.

But it will be very interesting to see what FS comes up with and how it plays. I will for example admit that they managed to make the Grail Knight more distinct from the Foot Knight than expected.

The only current Hero career (following the TT) that Bardin has is Slayer (while it’s normally Dragon Slayer I believe but whatever) the other U5 have at least 1 or 2 career that can be pointed to Hero career (proper Hero career not like Slayer at the moment unless they rename it):

So we need a Dwarf Hero career:

I am no expert and could be wrong but…

…while a special character Lord choice was probably a better pick for the points, it didn’t have the charm of allowing you to deploy your own character, have your own blazon and write your own fluff for your army.

In my opinion the main reason as to why I find GW to be the best maker of miniature games is that I don’t find any other game that allows so much DIY creativity for the players.