I had been away from the game for a long time. I just came back a week or so ago and discovered the Chaos Wastes update, and… I absolutely love it.

The randomness of levels, boons, and most importantly the possible paths within the levels themselves give it extraordinary replayability. I have always felt that multiple possible pathways within individual levels was always sorely needed in L4D like games, but they never have them for some reason (I hope Darktide has them as well).

I used to always play solo because I had way better success by myself. I win 9/10 solo legend games and like 5/10 while in co-op. That win rate holds true in Chaos Wastes, but for some reason I actually enjoy playing it with others more than solo. Not sure why.

Now I just hope I don’t have to wait too much longer for a new salty and wizzy :).

Some things I’ve noticed. Stat padders are super annoying on horde maps. They just stay there killing every horde in stead of running and fighting, which makes the map feel like it takes an hour.

Exotic combat boons feel too rare. All the games I’ve played and have only seen crit lighting twice. Feels like I almost exclusively get exotic boons related to shoving or making downed players tougher.

Damage link debuff is a nightmare with bad players. I try to keep my distance, but they try to stick to me like glue and end up getting everyone killed.

The Nurgle Bile bombs are also somewhat annoying because it doesn’t give you enough time to get away before taking damage. Plus, I haven’t quite figured out how to tell which enemies are cursed or not yet.

Some classes definitely feel more difficult than others when lacking trinkets, but that’s not such a big deal.

90% of people want to play the elf, but that is nothing new i suppose.

Some things I’ve noticed. Stat padders are super annoying on horde maps. They just stay there killing every horde in stead of running and fighting, which makes the map feel like it takes an hour.

Its easy to end up feeling like that but it´s worth bearing in mind that nor all characters/builds are able to run away if enemies get into melee range. They´ll easily end up boggled down and forced to fight.

The Nurgle Bile bombs are also somewhat annoying because it doesn’t give you enough time to get away before taking damage. Plus, I haven’t quite figured out how to tell which enemies are cursed or not yet.

They should have this green gas cloud around em, and be taggable.

And for some weapons/attacks if you dodge at the right time just as you kill one it should be possible to avoid the damage entirely, at least i´ve done that.

You can always kite back… Merc can shout and pretty much walk away.

You can always kite back… Merc can shout and pretty much walk away.

Only if all the enemies are clustered ontop eachother, if they are scatteredly running towards him then sure he can buy a little time but it´s a certain thing that the time gained will be short. And in that next part he now has to face a much denser horde alone with no shout which will be more dangerous.

Thus its generally advisable to just fight, even if that means that the people who have the mobility and are using it end up needing to wait when they inevitably crash into a gate somewhere in the wastes.

Some of the most mobile careers in the game, given their abilities.

It is still a valid point of stand and fighting in certain scenarios. You are just inviting stuff like running attacks and making it harder for yourself.
Bit different if the context is just few horde enemies and wasting time dealing with all of them.

Its easy to end up feeling like that but it´s worth bearing in mind that nor all characters/builds are able to run away if enemies get into melee range. They´ll easily end up boggled down and forced to fight.

I mean people clearly going out of their way to kill more enemies than anyone else (usually an elf). They will be in front of everyone then run back to fight enemies, and since new hordes keep spawning before the old one dies they just stay there for a really long time. I’ll go back and murder everything so that they can’t, and they still stay there waiting for more. I eventually get bored and run further ahead hoping the others will follow. 2 usually follow, but that one stays back until they start getting their ass kicked.

Some of the most mobile careers in the game, given their abilities.

Outside a horde already ontop of you? How so? Sure with one running down on you there is the possibility of shouting to stall the forerunners a bit but then the ones behind em will catch up and run you down anyway.

Enemies move faster than we do by default, and merc&IB have no speedboosts. They also do not have weapons like hagbane where you can walk&shoot with basically no loss in movement speed.

They have fundamental movement techniques that all careers have available, like dodge-resetting, and plenty of small things to help them kite over long distances on top of their active skills. Merc has extra dodge distance, IB has second wind and so on. No need to sit around killing every small rat if it’s more advantageous to just move.

Merc does not have extra dodge distance by default, and as far as i know many are instead using the damage reduction option on that row. But even if he does use it his weapons are on average not mobile ones like rapier.

What´s second wind? As far as i know IB has nothing called that.

And i think you are overstating the innate possibility all careers have of outrunning a horde, at least a cata one with elites in it over flat terrain. If you run too much without the requisite mobility you will just end up eating charging attacks which can quickly become fatal.

Sure elf in general can do it pretty easily as most of her weapons are just that quick, or WHC with a rapier, but something like kruber with a 2handed hammer or a dwarf with a greataxe doesnt. 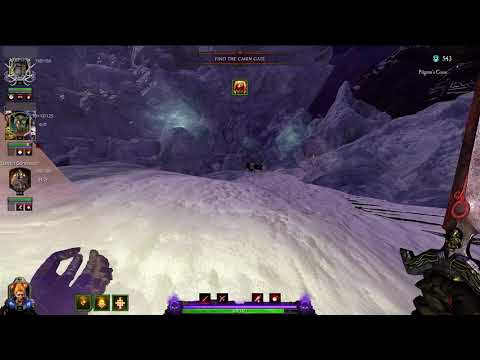 Basically this all map long, and it’s never even on the flying loot ball curse maps.

…Well there´s no accounting for stupid.

I do suffer from people with bad aim every so often but that was a tad bit beyond that.

Well that is just some next level stupid. If you have maybe try games on cata, I can’t recall ever seeing something like that and the general atmosphere should be superior either way.

Yeah CW was nice in the first week of release, but even in that first week you have already seen everything and eventually realize that its just a simpler version of campagne. Not only because the maps are empty as hell, but also because you can easily get yourself a busted buff combination to make evertyhing a joke. But even that isnt needed, because the whole balance is off. You can easily get through CW cata with grey items and no buff, just saving up for the end to buy all red items and then finish the last run.

The old maps are just boring by now and CWs random builds makes it way more exciting. Sure some boons are broken, but when I play with friends we generally don’t take the broken ones to keep it tense all the way through.

Also the fact that you have to clear 5 maps to complete it makes it waaay more interesting.