well i like to play my “Giant Slayer” with 2 Handed Weapons, cause i love my Axe and i love my Hammer for Horde Clearing. But its wewird that they share the same Block Cost. How so, they are 2 different Weapons. In the beginning i played Slayer with twice Dual Axes, but yeah, Block Cost is shared hich can be hairy sometimes, but i loved having one with attack Speed and one with Power vs. Chaos.

Now since Slayer has no Ranged, shouldnt that mean that his Weapons, either the exact same or in the same category, as 2 Handed treat Block Cost separatelky? I can totally live with twice Dual Axes having the shared one, but Hammer and Axe?

Would be nice to have them separate.

Also does it make sense to have 2 HHammer and a 2 Handed Axe. well, im love Dawis and for me a Dwarf needs a Axe. But, even the Dmg is better on 2 Handed hammer which is really weird. i dont ee the point. i can 2- 3 shot CW with the Hammer, reliably, but not with Axe. The Hammer hits the Head of enemies much better, easier than Axe. Which of course makes sense since the Head of the Hammer is much broader. But still, why make Hammer CC Weapon, but does kill Armored faster? They both have AP sure, but its still weird.

Please make Block separate and Cleave on 2 HAxe better than it is now. the Radius is very small. Hammer does everything better it seems, which is weird.

If they had separate stamina pools, it would be over powered and broken. You could just keep switching between them to let the other recharge.

As for weapons, I actually don’t run dual axes anymore. Dual hammers work just fine for horde clear and SV. Then 2 handed hammer in the other slot. 2 handed hammer can 2 shot CWs and stagger. The 2 handed hammer ignores super armour, so you can just spam the light attacks which as I said, 2 shots CWs.

yeah i know i can 2 shot Cw, and stagger with either Hammer or Axe with Heavy attack. I really digg that!

Well, dont have The newest DLC so im stuck with Vanilla Weapons, which are fine btw. Some say Dual Axes are good for Horde clearing. I dont think so , at least im not good with them Horde Clearing. I most definetly prefer Hammer or 2 Handed Axe.

especially regarding F& A, and Siennas Pick, which both can can oneshot Maulers… Sienna i think with Tag, but well, not that much of difference.

But OP is always a word i dont like to use. Sometimes its true, but most of the time its not, becasue some player are just good with certain Weapona nd playstyle. I remeber BF3 where AN-94 was called OP! Was my go to Assault Rifle, and yes u could Countersnipe with 2 Shot burst. But u needed a Heavy Barrel and good Recoil Compensation on ur part. Was used rarely on Console, but was called Op… Maybe on PC, cant say, but on Console, i felt like sometimes im the only one usin that Gun.

DLC weapons do tend to be a bit more powerful. Especially A&F…

And AN-94 was OP on BF3 PC. I used it a lot, the two round burst with high sensitivity and a mouse allowed you to control the recoil. On hardcore mode it was extremely powerful. SA-80 was one of the weaker weapons for a long time. They buffed it right near the end of games support before BF4 came out and everyone started using it. Which is the problem OP weapons cause. Once people find out how good they are, everyone wants to use them.

2 handed hammers first 2 light attacks are overheads. Extremely easy to land headshots. As far as I know, I think you don’t even need any Power VS, slayers natural power increase is enough. It might be 3 hits for body shots? But I’m pretty sure 2 hits is what I normally do. And I run crit chance and attack speed on it with attack speed and chaos or Infantry on Charm.

Then you have pick axe if you want to 1 shot CWs.

Dual axes and pickaxe for me - nothing feels better than leaping using ult and smashing CW’s head mid air, one shotting him (requires total +30 chaos/armor though). I actually got quite good with this trick.
Of course hammer is most likely a better choice, but there is something so damn satisfying, when you put the big guy to eternal sleep with just one strike. I wish there was an animation, where the pickaxe penetrates the helmet, gets stuck for a split second and Bardin violently tears it out, and blood and gore spurts out of the opening. That would be sick, rated M for mature 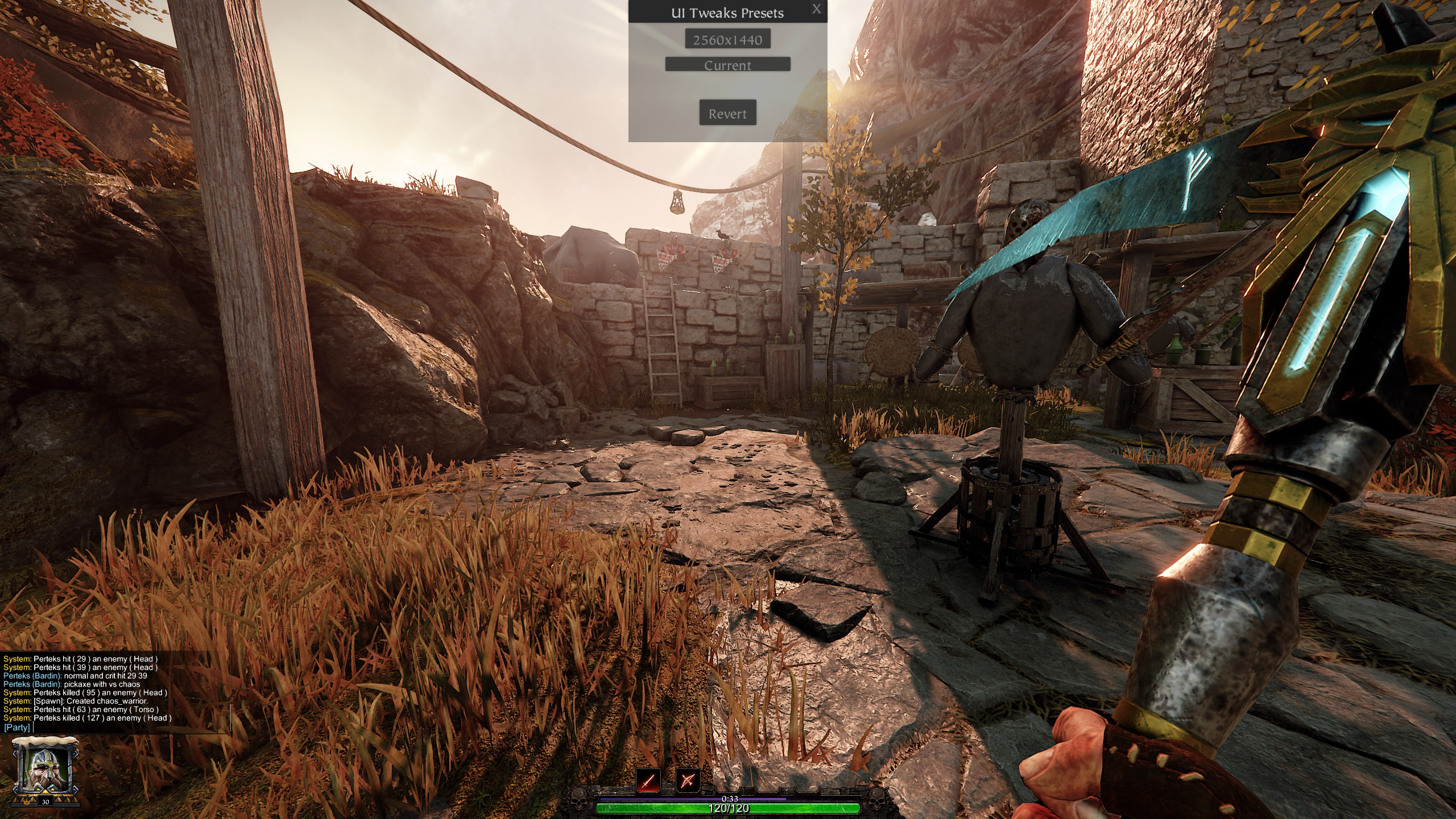 YEP, you’re right. It’s been a while since I played that filthy dwari. It takes 3 hits to down a CW with a 2 handed hammer. Still, with slayer attack speed and ULT, you can kill off CWs way faster with the 2 handed hammer than other weapons in my experience anyway. Spam light attacks and wreck a CW patrol.

indeed, its 2- 3 hits on Cw even without additiopnal Crit Dmg from Slayer Talents! Its dope. But even on Ib u can 2-3 hit CW, when crit applies. I run Ib mostly with 2 Handed Axe, but i like to switch Weapons sometimes. 2 Handed Axe is pretty good Combo with Drakegun!

30 is normal headshot 40 is crit, you need atleast 3 hits with crits to kill chaos warrior not 2-3