1 hp per hit for crowbill is still workable, it was viable then and still is now, but flail with cleave is better than any other weapon with stagger for UC. You can get similar thp with stagger and flame sword, but that weapon doesn’t really have synergy with UC.

Good day. Kerillian is missing quite a few illusion skins for the red weapons in first person mode.

Here are the weapons that are missing the glow. 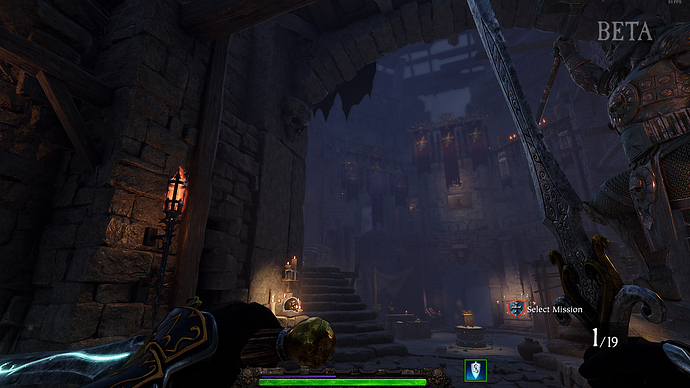 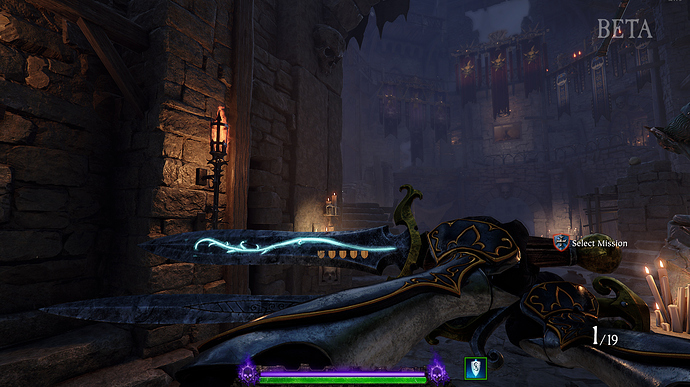 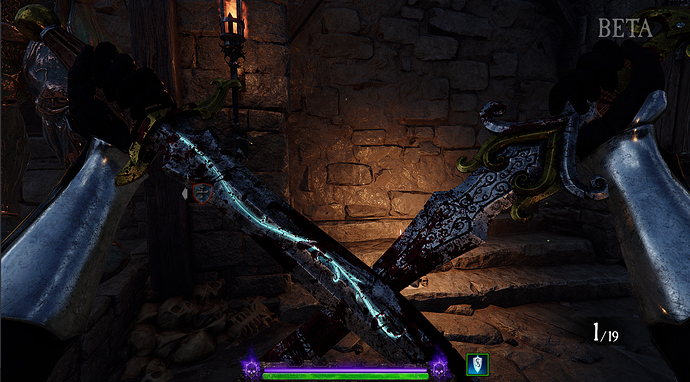 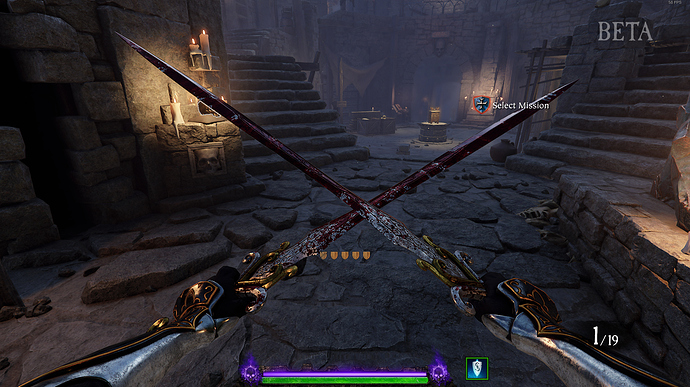 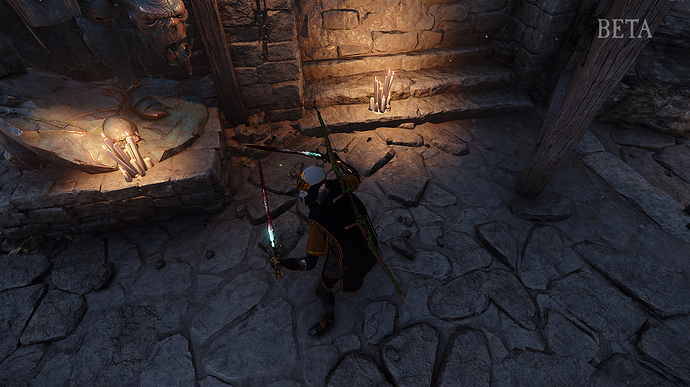 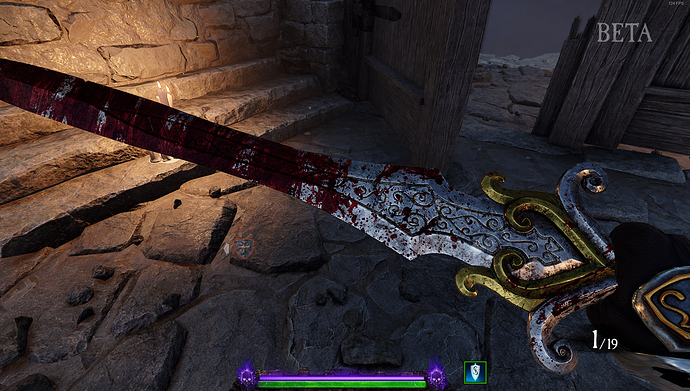 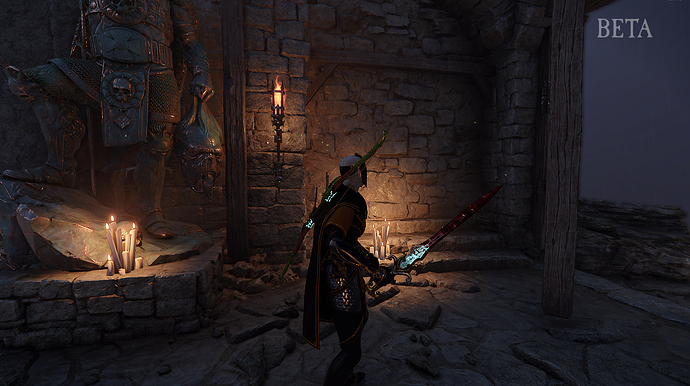 Also, you are missing many of the red skins for Lohner’s Emporium from the Winds of Magic update. For example, where are the illusion skins for Kerillian’s Sword and Shield, Sienna’s Flail or Kruber’s Spear?

Is there a specific place to leave feedback for the Beta? In times past, it has seemed that feedback during betas has been missed. Perhaps if there was a centralized location for feedback, it would be easier to keep up with suggestions coming in from the community.

Q cancelling with 2h hammer. Practically all slayers players do on higher difficulties and it absolutely melts all heavies.

I love pretty much all of this stuff, except…

The talents that increased range of the leaping/teleporting Career Skills caused a lot of problems with out of bounds and mission skips so they have been replaced. (see Bardin and Sienna notes below)

Slayer - Bounding Leap has been replaced with ‘Crunch!’ - Increases the stagger strength of the impact of Leap by 100%.

Seriously?! People were abusing map geometry to cheat, so instead of fixing those exploits you are taking away the utility and fun of the character, thus ruining it for the rest of us? Granted I’m sure there are plenty of people who will be glad to have Crunch! back as it was fairly popular before… but I absolutely loved using bounding leap. It was just so much FUN! I reckon I’ll have to download the live version again so I can have a little more time with it… /sad

Ok I know I’m being pretty salty about it, but I will admit that all things considered Crunch! is probably a more popular talent, and arguably more useful depending on playstyle. The given reason for change of

Really does bug me to no end. People abusing various things to skip maps has been happening since launch and the result has been powers and talents getting nerfed into comparative boredom, because “we can’t have people cheating!” Which has always confused me, because I honestly don’t give a s*** how people are playing it. If I join a game with someone trying to do that I just ignore them and play the level proper, they end up either dying alone or having to sit there forever waiting for me so they leave XD. Ultimately though, it just feels like a “lazy” fix, saying “oh we’ll just quick nerf that talent”, instead of “we’ll fix our broken map geometry”.

Buuut… on the flip side, I’ll concede that such exploits do sometimes annoy me, for example I see people with uber-impressive portrait frames like the one for FoW on Cata… and I’m just not impressed because I know they almost assuredly cheesed it with Battle Wizard by teleporting up on top of the tents, or were carried by someone doing that. I’ve joined lots of FoW groups through the lobby browser and so far every group has had a BW doing that. Cheesing levels and challenges makes the accompanying accolades meaningless.

Unfortunately, I feel like we’ve already gone to far with things the way they are, so now “fixing” those things by nerfing the characters just dampens the fun for the rest of us, when plenty of other geometry issues abound and will simply become the next exploit target.

Aright, I’ve had enough ranting, overall two thumbs up for all of the changes here, I really am stoked to test out the beta tonight. You guys are doing bug and QoL fixes galore and that is amazing, community has been asking and you are delivering, so thank you!

What is the benefit and appeal of QP weaves? If it is already Impossible to find a ranked group for the weave you are on why will it be easier to find one for a randomly selected one that doesn’t give any progression in leader boards or challenges? I guess I am asking… what is the point?

Apparently it will give an increased amount of Essence compared to replaying a weave?

But even if we ignore unlocking new weaves, rankings and portraits, I still don’t see the appeal of QP weaves. Why play a QP weave for just Essence and 400 EXP, when you can play normal adventure maps and get Essence, more EXP and a vault?

Yup, and if the main reason to play qp weaves is to get essence then it will essentially be a farming tool for people pushing ranked weaves. I just do not understand. Most of my friends list has moved on from V2 after WOM dropped and the best players have their set team of 4. I checked every day for a group with an open slot, doing or around the weave I was on, to no avail. The few times there was a spot available was on the world search and was to much lag to even move around. Honestly was hopeful for this content drop, but once I logged on and saw the same grind-fest weekly quests copy and pasted to Lohners Emporium I knew that the friends I made on V2 were not coming back for this.

This didn’t work. Just killed Rasknitt and my screen was full of blood when he exploded and I have both the setting on OFF and blood decal on 0.

What is the benefit and appeal of QP weaves? If it is already Impossible to find a ranked group for the weave you are on why will it be easier to find one for a randomly selected one that doesn’t give any progression in leader boards or challenges? I guess I am asking… what is the point?

Why play a QP weave for just Essence and 400 EXP, when you can play normal adventure maps and get Essence, more EXP and a vault?

For fun! A lot of people (myself included) like the weaves for variety and challenge, so having a QP option is great to just jump into some random weaves and have fun.

If you’re wanting to grind essence then playing the regular game is probably a better use of time anyways in my opinion.

Can’t you already just pick out a weave from the menu already? Maybe I am just confused on why it is something you can’t already do . Is it just having a button that randomizes the weave type that is appealing? you can already pick whatever type of weave you want .

It’s much better for finding a group. Currently, Weaves is something that you pretty much can only enjoy with a premade group, because the matchmaking for it was horrendous. Quickplay weaves lets you pick a difficulty (so, a range of weaves) and just find a group, which is much, much better and will help people FIND other people to make premade groups to tackle ranked weaves properly with.

I hope so. That is really what I want in regards to weaves, but I want it to go towards challenge and leaderboard progress. Sucks feeling like i am missing out because my group no longer plays V2. Should be easier to get groups that are actually capable of clearing AND goes towards challenges and quests Etc… If it is just a “fun” thing then Im gonna say thanks but no thanks on the qp weaves

Also though… If QP weaves are to help you find a group for ranked than why not just make it a ranked weave tool?

For fun! A lot of people (myself included) like the weaves for variety and challenge, so having a QP option is great to just jump into some random weaves and have fun.

Hm, I guess for fun would one of the better reasons to play QP weaves, provided you enjoy weaves and the prospect of doing random ones with strangers. There would be some challenge in going into a random weave with a group setup and character builds that aren’t optimized for that weave and wind.

But while QP weaves may work for lower difficulties, I doubt it’d work for higher ones. The way higher difficulties were played, were that people would get familliar with the map and its spawns, objectives, enemies and item locations through trial and error, decide on a strategy and then replay the map until they did it well enough to clear it. With QP, you can’t do that since the weave is random each time. If the group decide on replaying that map, then it no longer becomes QP and you lose the Essence Bonus, and you might as well just have joined a random weave in the ranked matchmaking menu.