The thunder Hammer makes no sense

I don’t think Penetration is working properly or if it is some weapons are exibiting wierd mechanics.

But it gets wierder … if you are a 40k fan you know chain weapons specialize in tearing fleshy targets, and power weapons are for opening tin can enemies … in other words, the thunder hammer should do the same damage to a dreg as it does to a Crusher … because it ignores all the armor (or most of it.) and that should bother the crusher greatly.

This IS NOT what i found in the meat grinder and you are free to test them out yourself. 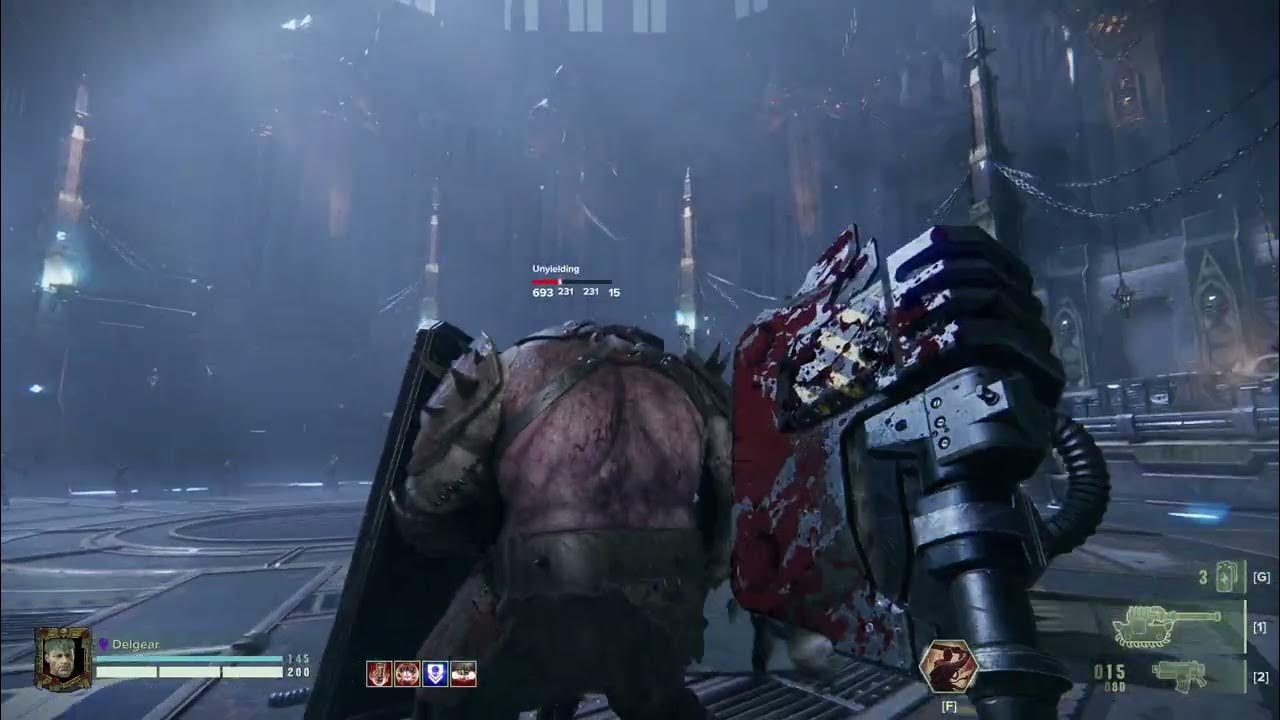 The thunder hammer does an amazing 1800 damage to the shield ogryn … without crit …
it takes 3 hits to kill either of the other targets in the 600-700 range …
The chain axe does very poor damage against the back of the shield ogryn (makes no sense). it takes three activated fierces just like the hammer to kill flak, and also only 3 on carapace.
So both weapons are operating in a strange place …

I think you are far better off making all the “Activate weapon” default state “Activated” and they stall after X swipes … Power weapons should eliminate the defense of heavily armored targets, and chain weapons should only ignore some armor on Flak and get some kind of damage multiplier or flat bonus agains non armored targets.

Any weapon rocking a power field (or psychic powerfield) should ignore some amount of armor and cut cleaner (wider) and cleave more in those circumstances … and not do additional damage … thier feature is supposed to be to ignore solid object defenses, power fields dont cause more trauma, they make trauma more consistent if that makes more sense.

If i had to pick a place for the thunder hammer what i would suggest: It by default is “Energized” and every ? 3-5 hits-ish it stalls and needs to be restarted, but also recovers “energized swings” while blocking or not melee’ing in a /per second fashion. Then the move set needs a slight adjustment and needs to intereract with enemies differently as follows:

Power off:
weak:
right to left 45 degree-ish sweep then a left to right 45 degree-ish sweep that hits the first enemy it comes into contact with and cleaves 1-2 for low damage but high knockback moving towards midscreen then on the third strike performs an overhead. These attacks should rebound off Flak or Carapace but faster than now so you can still quickly block.

Fierce:
alternates 120 right to left 120 left to right then lastly overhead. these attacks should rebound off flak and carapace and do reduced damage. These can rebound slowly with the present punish window.

Powered:
Weak Attacks cleave all the way to mid screen and the overhead causes lightning (like the thunder staff) to hit adjacent enemies to the hammer for no damage or negligible damage but it shocks them preventing them from attacking.

Fierce(hold left click) each send lightning on first target hit and cleave through all the way from one side to the other, Final overhead throws lightning off target.

The hammer should kill all lowest tier enemies in one hit, but swing slow enough its substandard even if the unpowered hammer kills in one hit.

It should deal its full damage to flak.

It should deal its full damage to Carapace.

Its damage needs to be lower, it shouldnt hit for 1800 damage its advantage is its damage doesnt decrease at all against heavier targets its still a big 2 handed hammer so it should do good single hit damage, but whatever wierd mechanics make it do 1800+ to bulwarks has to be causeing some problem elsewhere …

It should also transfer some damage and lightning through the shield on shield ogryns blasting the shield out of the way and potentially shocking them for a moment to compensate for the slow swing speed.

Moving the recoil to the standard unpowered weak attack will help cement the thunder hammer as poor against hordes as it will stall long before they are dead, but still provide the “Shock and Awe” required when charging into a group to keep them from shooting friends.

It will also fix it not harming heavily armored targets well as it should do “True damage” through armor and also the shock and awe will help with those tankier bulky targets without allowing you to say GIGA CRIT the shield ogryn for 1800 ? the plasma rifle and thunder hammer should be the go to technilocical damage sources for the heaviest armored opponents.

A thunder hammer should hit like a mack truck upfront but not be able to sustain its rampage.

This will also mimic the figure 8 momentum building of actual hammer combat because hammers are “double sided” you can figure 8 it after a swipe either by rotating your wrists or by using a false edge motion.

While we are on the subject of power weapon type items the force sword works very strangely, and the motion is very strange.

It operates like a chainsword in some regards but is even more conal or single target focused in motion.

look at the power sword … in 40k a force sword operates like a power sword, it penetrates armor but crazy fun fact, it does so with penetration equivalent to the psykers psy rating so its an even better penetration weapon than a force sword normally. if the psyker had less than a 3 rating they are generally emperor chow especially if a criminal already (as we are).

I would put the force sword as an efficient powersword type weapon. In other words give it power sword animation and mechanics, that is how it should work is exactly like the power sword does but potentially a little bit more penetration, little bit less damage or maybe the same. It should cleave better when the field is around it. it should cost perils % to recharge it if it depletes in a fight.

Power swords and force swords are generally balanced in warhammer 40k which is a trait that helps them parry, these weapons should have a group wide bonus helping them block for longer.

Moving right along to Chain weapons:

I would again by default have the chain weapon be “powered on” by default and i would give them the longest amount of strikes before stalling like 10 because they are a fleshy target and horde handling weapon.

I would give them bonus damage to any enemy without armor (beast of nurgle, corrupted ogryn, bulwark(Flank). i would have them pen approximately half the flak armor defense or whatever it takes for them to perform about even with power weapons against flak, they should be sub optimal against carapace with a gradient of better horde → carapace in the follwoing order chain sword(Hordes) → Chain Axe → Eviscerator(Carapace)

However, the eviscerator is a special case and should probably only be accessible to the preacher. It should probably operate at a PEN level equal to a power sword and have the increased damage to fleshy targets. It is technically a combination tearing wepaon and power weapon. Its animations should probably reflect that and have its default state be “activated” and it should cut like a power sword does in fleshy mobs closer mimicing its attack pattern. it probably needs about 3-5 swings before a stall.

Axe type weapons in 40k are genreally unwieldy and should have slightly lower blocking stats.
Therefore eviscerator should have good blocking stats V Thunder Hammer better at shock and awe and not so good at blocking. presently the opposite is true.

Non powered weapons:
Non-powered weapons should have higher base damage and cleave (operate better than a powered weapon that has stalled) and therefore be the best at clearing mobs due to not losing optimal operation.

But each powered weapon will outperform them in thier chosen field when powered on.
chain → better at hordes until stall.
power → better against flak and small groups.
heavy power weapons → better at carapace targets.

In the current state of the game there are pretty objective best damage dealing weapon groups because penetration against armor does not work properly.
There is no real reason other than entertainment value or personal preference to ever select the thunder hammer over a chain axe or Eviscerator, all three get locked into animations that cause you to take hits lighter weapons would not but theres no payoff at the end of the rainbow for the thunder hammer. and TBH the chain axe, and chain swords operate alittle too well against armored targets and a little too poorly against unarmored foes due to this fact. The chainsword i feel suffers the most as its base damage is the lowest and must be charged every strike to confirm a kill and yet still sticks you in animation to get hit and has no payoff against flak or elites compared to its other contemporaries. It also has a completely senseless reposte that pokes one target in front of you … its a chainsaw not a rapier … its most likely to get jammed or stall doing such an attack.

One of the best features of following 40k’s already established mechanics is that you don’t need to make HP sponges, every weapon has a weakness and a strength. even well rounded and versatile weapons have the disadvantage they don’t really excel at killing anything in particular …in trade they can kill most things … eventually.

If i have a thunder hammer and i am in diffculty 5 with extra hordes … i should expect to have a rought time. If im packing a chain weapon and its extra carapace enemies the same should be true … without them having to have 2000+ HP. or If they happen to then they should have no armor so the chain axe can shine as well …

I think I understand the Thunder Hammer’s issues a little better now. If this website is to be believed: Darktide Melee Stats ~ Darkmass

Penetration stat there is shown as only affecting heavy attack damage against carapace armour. That’s not to say the base damage of light attacks isn’t also a problem, but this is almost certainly contributing.

@Fatshark_Hedge can you check with someone who’d know and confirm if that is indeed how penetration stat currently works? Might warrant tweaking, definitely in the case of Thunder Hammer, but possibly other cases as well.