State of the Game - please Fatshark

at first, i want to apologize for any spelling/grammar oopsies, i am not a native english speaker.

I was wondering why there was no Statement from Fatshark about the various issues the game has, or have i missed something here?

Whats with the missing Weapons, some of them were even shown in the Trailer but appearantly didnt make it into the release - i was told to “check the pins” yesterday on their Discord, somebody even made a small reddit “meme” on that answer from Hedge. Why is there still no official statement about not delivered, but promised content?

What exactly is “utterly complex” about this psychoshark cashgrab cosmetic Shop? Dont get me wrong, i like skins, goodies, whatever for real money, i would even buy them, but the amount of Aquila you get from the various offers and the amount of Aguila you need to buy a cosmetic set - come on Fatshark, noone here can tell me that you did not know, that such tactics would result in players get mad. Noone can be this out of touch with the community. Its not some kind of voodoo magic, paired with dancing around a burning firstborn under two moons to properly adjust pricing or amount of aquilas, and you know that. milkandcookiesTW explained this perfectly in his YouTube Video.

Speaking of cosmetic stuff, i got the imperial edition, cause i really liked the look of the skins at first glance, but please explain to me: 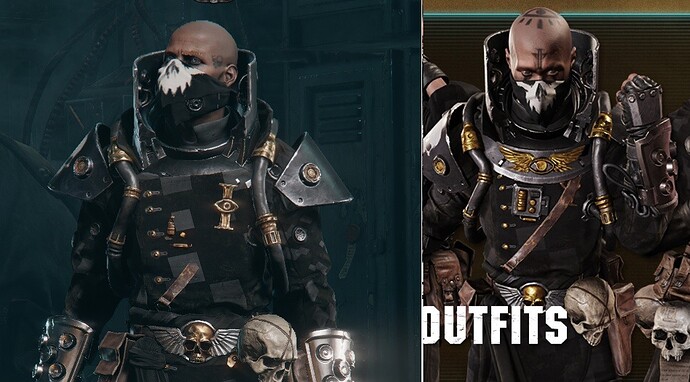 What exactly is that? I know you already posted something about the Thunderhammer, but how the actual dingdong could this be shipped in its current state? For me, it just looks like you simply do not care, money is already in the bank, fine, we´ll fix it “laters” - and thats just ashaming.

Not to speak about the absolutely terrible performance and stability:

I bet i changed my settings about 100 times now and still not found a setting which let me play one single mission from start to finish without at least 1 crash, and before anyone here gets some crazy solutions out of the box, ive done it all, drivers, reinstall, config, options, praying, offerings to various gods, calling my mum etc. pp.

And the sum of all topics, thats why many folks in your discord and here in the forum use some kind of… “harsh” words. Its not about a single topic, its the mix of all that issues, the bad performance, the missing/promised stuff, the gameplay bugs like the toughness issue, the not-finished crafting, where is the post-game scoreboard, etc. etc. etc, BUT the microtransaction shop is up and running.

Of course do i know that different teams work on different things, and the gameplay/content/whatever team has nothing to do with the ingame shop team, apart from the designers. As i stated, its not a problem that an ingame-microtransaction shop exists in the first place, its about how it got implemented, how the pricing/currency ratio is. Sometimes things are just bad for your image, and i bet you knew in the first place, that the launch like this would be not gold and roses.

Please, as i stated in discord, none of this is a personal attack on you or any other member of the Fatshark team, but you are the connection between the devs and us, thats why you get all the “love”, sorry about that.