This Post is about dodging , but not about the actual effective dodging time window. The problem i have with the current dodge is that it is a pretty weak if not useless tool for spacing at the moment. Im pretty sure that this goes hand in hand with the new enemy attack tracking range and general behavior.

Sadly this is a mayor problem if you play Bountyhunter or any “low” mobility character. My gameplay used to revolve about spacing , working towards optimal positioning so i could to fulfill my role in sniping enemy elites whenever possible. Characters without teleports , jumps and dashes simply have no tool for effective spacing anymore. 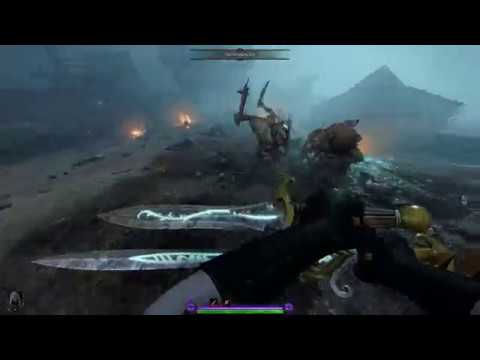 I will link this youtube video here and you can see how little space this player gains over a handfull of simple trash rats once they entered melee range. And this is even a scenario where the player has plenty of room to move around and also high movespeed on top. In a real game or combat scenario this means serious trouble for all low mobility characters.

Good positioning throughout combat ~ or combat flow if you will , is actually gone with no spacing tools left (besides some character carreer abilitys). On top of that the actual benefit for picking movement speed seems also lowered. Why dodge an enemy or try to move if he will just track you like hes bound to you with some sort of rubberband ?

So am i missing something here ? Maybe a discussion would help shedding some light on the actual spacing game. Is it intended that we all play just full turtle mode and not move much in combat ? Do i play wrong ? I really would like to know because playing my favourite character (BH) has just become somewhat frustrating.

I agree it’s terrible - you’re basically limited to stunning/pushing things to create space and swapping to ranged mid melee is no longer possible. A lot of my old playstyles/builds are completely dead now.

And yes it appears to be that this is what FS intended.

In these kind of situation you have the face-kiss them (to avoid running attack) and dodge at the proper side (or diagonal) ways. It s a bit counter intuitive because you actualy have to stay “close” to them in order to avoid them.

Movespeed doesn’t apply to dodging or jumping. Your +15% movespeed was completely inactive for most of the video.

So simple running would have been more effective to gain some space ?

If you can stack a lot of movespeed, then it’s actually better than dodging, but then you’re not allowed to stop moving and that needs a lot of space.

So this would basically mean spacing with movement is highly situational because you need a lot of movespeed and room to move around. And spacing with dodging is basically gone (enemy running and attack tracking behaviour) because dodging is for avoiding attacks only , is that right ?

Pretty much. The only really reliable way is to potentially push the enemies in-front of you if there are few enough for you to do that or dropping from altitudes. But in general just face hugging most enemies now is a lot safer than proccing 10 different running attacks as counter intuitive as that sounds.

Certain weapons have zero penalty to movement while attacking, or even give bonuses. Which is why those weapons feel so good on certain classes. Like S&D on shade… the weapon has a 25% bonus to dodge distance and dodge speed.

Heavier weapons like the Ex Sword on Kruber have a penalty for movement while attacking. You slow down. That’s why I use to stack attack speed and put movement on my trinket and aura talent. That extra 10% movement speed helped a lot with mobility while spamming light cleaves.

But where did you get that information ? When i look at my inventory and loadout in game, i can not see any values like movement speed and dodge bonuses in percentage or something like that.

If i had these informations it would be a lot easier to decide for weapon loadouts if i intend to play like in an “spacing” style or something like that.

Simple testing on my own wouldnt be very accurate i guess.

Running attacks being just the most dangerous thing in the planet again is mostly due to them rendering backwards dodging irrelevant. So now suddenly going anywhere that’s not forward without a movement ability is the most dangerous thing you can do, because you’ll now be proccing an entire swarm of running attacks that can’t be reliably contended with (depending on size of that mob ball) without blocking. Which depending on what’s in there can simply crush your stamina.

I don’t like having to deal with that being to intentionally move forward as fast and close as possible to get those attacks out the way. But I accept the reality that sidestep just isn’t reliable due to the other various attacks that can be queued, leading to the result that you have to block an attack and push it. Which feels awful

Parry might make a comeback as alternative to SS.

That’s what the armory mod is for.
Otherwise - according to FS - you don’t need to know this, it will only hinder your game play, thus revealing this info in-game is unnecessary.

Yea, as @Palesz said. Get the armoury mod. It has all the information for each weapon. Movement bonuses, cleave info, damage on additional targets, how many targets you can hit, bleed, burn and poison info, etc.

Oh yeah , thank you ~ i heard of that mod before and tried it some days after 2.0 release , did not work back then but i will give it another try.

Btw. how is additional info going to hinder my gameplay in a game that revolves around character builds and gear with a whole lot of attributes and stats ? Sounds like an lazy excuse for lazy design o.O