Shame on you Fatshark

We are loyal to you, we are loyal to Warhammer. The people who have supported you when you were nothing. You do remember that right? The time when you were a small studio begging for support from the Warhammer community. Begging us to bear with you, to hang on for the long run. And we did!

We gave it to you. We gave you money, time, support, kind words, PATIENCE PATIENCE PATIENCE and more PATIENCE. Our relationship was a good one based of mutual respect and a love for Warhammer. That has now changed.

You have shown some colors we didn’t know you had. We didn’t know you were capable of cold, juvenile responses designed to demean and belittle your support base. The face you showed us through every release up until Darktide is not the face you show now. What we see are lines of greed, lack of care, and disdain for others. You purposefully and masterfully deceived a massive portion of your support base into believing they were receiving a long list of features, content, fixes, etc etc etc. Unlike VT2 you went out of your way to market and push Darktide as something it is not to gain our trust.

You may forget the conversations you had with us but we do not. You allowed us to believe you were using VT2 and the amazing game you turned it into as a basis for Darktide. All of the knowledge, time and effort involved in VT2 you threw out the window and you focused on shallow concepts and greed.

I am disappointed in you, I am disappointed in myself. My support of you makes me look like a fool and I won’t make that mistake again. You have a lot of work to do, I daresay the work you did on VT2 is nothing compared to what is in store for you right now. Make the decision to own this game.

My excuse is this is my first (and probably last) fatshark game and I haven’t played a 4player coop game in about a decade. shame the vermintide games are set in a fantasy setting otherwise i would have picked them up instead.

100%. Thank goodness my friends didn’t preorder the game on my recommendation. I agree with you, we’ve been made to look like fools.

I tell them about some of the systems that Darktide changed and implemented and they say “lol sounds like Fatshark went Diablo Immortal / Fortnite / Genshin Impact / Battlefield 2042.”

The thing is, are they wrong?

i didn’t know much about FS and their reputation of releasing BUSTED ass games, but after purchasing and playing DT and doing a lot more digging - I regret it. I played VT2 maybe a year or two after being released, so I thought VT2 was released in an awesome state. I had no clue VT2 had issues on launch as well. I then learned modders kept VT2 going over the years by adding balance changes, QoL mods, and overall made the game so much better to the point FS caved in and implemented it themselves to the main game. VT2 is basically just a community made game… I am disappointed FS decided to chuck everything they learned what we enjoyed as players, the consumers of their product, aka pays their damn bills, and decided to spit on us. Smh.

Never played Vermintide as I’m not into fantasy, but Wh40K, played most games set in that setting… Oh boy.

They failed to deliver so hard.
Starting from lack of weapons, cosmetics, classes, diversity in maps, diversity in classes, most penances are fck-all anti team oriented in a team based game.
Penances explanations were written by a buffoon so people have to google what the fck it means and how it’s done ( example: Make every shot count - 100 % accuracy with no ammo remaining while Veteran has a passive with which he regains ammo in Coherency from killing elites), quite simple actually but it is nowhere stated that you still get that penance even with his passive if you just don’t equip your ranged after the weapon is empty for the remainder of the mission. Thanks Reddit!

Why aren’t all mission types available? Why isn’t it shown what types of missions are left for a penance? Why no crafting? Why no scoreboard?
Why can certain mobs such as Mutant turn 180° and grab you, not to mention glitchy twitch ass janky movement of that methed up Hound?

Don’t get me wrong, game is fun, setting is right, it’s apparent you guys love Wh40K universe but certain people f*cked up with their ideas of how this game should be.

I doubt many will wait years like in Vermintide for the game to be complete, but you should have waited with the launch because, right now, game is a half assed attempt of a finished product.
Luckily we are getting Space Marine 2 in the meantime while Obeseshark gets its sh*t together, or not.

Peace and may the Emperor protect you.

Fatshark has most certainly burned my goodwill. I stood by this developer praising their games through Vermintide 1 and the entirety of the sequel - despite no dedicated servers. I told my friends about how good Darktide will be. Now they think me a fool for misleading them. As if I’m at fault and not the unmitigated greed of Fatshark; their trailers, interviews, steam blog posts, and so on; all cynically manfucatured to garner support and cash in on our goodwill. I hope the marketing effort was worth it. Perhaps I’m to blame for believing in them. Suffice to say, as of this moment, the overall rating has dropped to 64% and continues dropping: 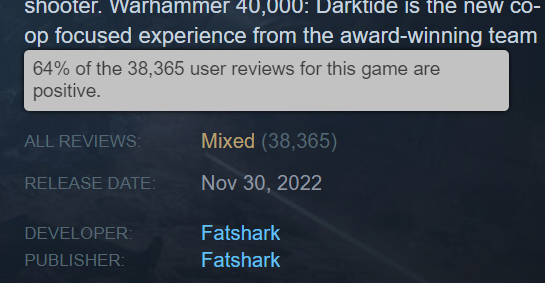 This experience wouldn’t have been as bitter if Fatshark was communicating to us, us being the community that’s been with you since the first Vermintide, calling for patience, requesting for calm as they assure us they’ll fix the things we’ve been grieving over. Alas, this isn’t what’s been happening. Instead we’ve been receiving tone deaf silence. A community update that refuses to acknowledge our problems - but there’s going to be freaking emotes, which will invariably cost money no doubt. And let’s not forget the unprofessional condescending patronizing behavior that a certain Representative has been displaying towards us.

I wish the best for Fatshark, I do, but at the moment I’m indifferent towards them. I won’t go so far as to boycott them or anything, but I will be a lot more critical than I was in Vermintide 1/2.

Wow. Id say all the above post are well worded and express a lot of the opinions I have.

Im already at the point were logging in to see the RNG daily store is annoying.

I dont have much to add aside to add my voice to the immense disappointment I feel and the silence / cold shoulder the company has given us.

This game is a sham after following what VT2 was.

Love your optimism towards them actually reading this and giving a damn.

I’ve only bought two games within the last decade without bothering to research them past their marketing, Darktide and Dirt Rally 2. That’s also exactly how many times I’ve regretted buying a game. Makes me feel like I’m being watched and tested or something.

shame the vermintide games are set in a fantasy setting otherwise i would have picked them up instead.

I’ve actually got VT2 in my Steam library but havent played it… There’s a lot of comments flying around about how good that game now is, I’m sorely tempted to install it finally and get stuck in.

Morzanith being the dad Fatshark wished it had. Well said.

Though I agree with previous posters, that they won’t likely read or care about these posts at all. Remember what they said back during Winds of Magic. They outright chose to ignore what the community asks for because they know best what we need. While I’m paraphrasing, it’s pretty much the condensed version of “f you, you’ll play (and pay) the way we want you to play (and pay)”

Remember what they said back during Winds of Magic. They outright chose to ignore what the community asks for because they know best what we need. While I’m paraphrasing, it’s pretty much the condensed version of “f you, you’ll play (and pay) the way we want you to play (and pay)”

Yeah, and no wonder it bombed.

The only reason people bought it later in the games life cycle was to get access to Cataclysm and the extra weapons. Which again speaks a lot to what the players want. It’s not goddamn twitch integration, it’s weapons and maps.
And a working map selector.
And actual crafting.
And no RNG.

Never mind who am I kidding.

And a working map selector.
And actual crafting.
And no RNG.

And challenging content, don’t forget, but like you said who cares what we think. This developer doesn’t really read our feedback anyways we’re all just preaching to each other at this rate.

I think that anyone who came just for DT and got burned owes it to themselves to at least try VT2.

I cannot in good conscience give this studio any more money or motivation otherwise to continue their practices. I’ve been aware of VT2’s good reputation for years now but I am allergic to dwarves and elves etc. so I’ll manage on without that experience as I always have.

I cannot in good conscience give this studio any more money or motivation otherwise to continue their practices.

Fair enough. Just saying though. The Vermintide games are pretty good. Besides Mordhau or Chivalry, I don’t know of any other game with a melee system as good as Vermintide.

Fatshark has managed yet again to royally screw up. Just like they did with Winds of Magic. I mean… It’s not like during WoM Beta probably +90% of the community said this is a bad idea and yet Fatshark went through with it anyway then crashed and burned.

Obviously the situation is very grim but the optimist in me says it’s not impossible to salvage Darktide and move forward.
Also obviously Fatshark are probably going to ignore anything I or anyone else here suggests as a workable solution.
Still, I’d say it’s better to present the case regardless of what Fatshark thinks for no other reason than to pry the minds of the community.
In no particular order
Here is what I would consider vital points that should be addressed ASAP:

Still at the end of the day. I really question Fatsharks leadership. It’s almost as if they are of the mindset of just get it out there now and they have completely forgotten that there is such a thing called FIRST IMPRESSIONS.

And first impressions can make or break a launch.
Sure, Darktide might reach the same levels of redemption like No Man’s Sky or Cyberpunk 2077 which are both good games now.
But the price they paid for this path is sacrificing alot of players that were on the fence.

Still… I could be wrong? 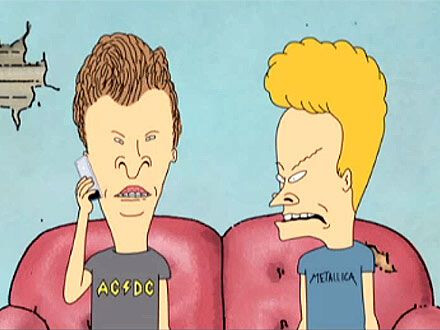 HELLO uh uhuh FATSHARK?
Can you like … do stuff faster? uhuhuh

Rework crafting and give us the ability to ACTUALLY have full player agency over our choices in weapons and builds. The whole 1 perk reroll only thing is so anti-player agency and pro RNG that it isn’t even funny, 'cos now you’re forced to get the right perk… from the store or pray that whatever weapons you upgrade gets the right perk on one upgrade so you can exchange the other perk. It is every kind of asinine. To get both perks right off the bat by store or by upgrading currently sits at a 0.25% chance of happening. To get 1 perk right is a 5% chance and that’s without considering the fact that 20 rating perks are so damn abundant that it makes no sense… Lord have mercy on their souls if they don’t allow us to attach 2 blessings.