Saltzpyre's 1H Axe is cool, but I don't know if I can justify using it

I just got my first red melee weapon for Saltzpyre, and as usual I like to use my red weapons as inspirations to try things I don’t usually try. In this case the one handed axe.

In testing the 1H axe in some simulations with legend difficulty enemies in the keep, I’ve gotten a rather sinking feeling from this weapon. It’s got some good things going for it:

But it has some pretty significant downsides:

Some ideas I had for potential changes:

I wonder if anyone has found a way to play around the axe that actually makes it better than other options for an actual run? Or do other people generally agree that this weapon isn’t in a good spot?

I’d like to focus specifically on Saltz 1H axe, though I am aware Bardin also gets one.

The One-Hand Axe has fallen behind lately and in higher difficulties no longer holds its own with just good armour damage and decent
mobility.

I wonder if anyone has found a way to play around the axe that actually makes it better than other options for an actual run?

Best advice is to pair it with the new duckfoot shotgun pistols on BH. They compliment 1h axe nicely and Assassin goes a ways towards making the weapon feel better. WHC & zealot have better options.

1h axe is weird. It’s the weapon I have the most fun with on all Bardin classes, but it feels really underwhelming on Saltzspyre. I realise this makes no sense as they are the same weapon.

I wonder if bardin has a better time because he’s shorter? I know that sounds weird, but two of the light attacks are diagonal topright-bottomleft and topleft-bottomright. Since this is a stagger heavy weapon, and a lot of enemies hunch over when they’re staggered, I find that I just straight up MISS a ton as saltzpyre just because the enemies are basically crouch dodging every time I hit them. Maybe bardin lands more followup hits because he’s short?

With high stagger weapons like the two handed hammer this isn’t a problem, because the heavies cleave a lot and thus push multiple enemies around, creating a lot of space, and the lights are vertical, so they don’t make the enemies dance around.

But with the axe I feel like every enemy I fight with light attacks becomes Neo. I don’t have this problem with the 1h axe heavies, but they’re so slow, and don’t reach far enough to compensate.

The 1h axe shits out damage and while it is sort of an anti-elite weapon you need to be smart with it as it’s more a damage everything near you weapon. So funnily enough, it leans towards clearing trash out more so than strictly killing elites.

You have the right idea with stacking attack speed as that reduces the time to kill but you should also consider more crit chance. There isn’t a whole lot of great one shot breakpoints with axe unless you are on zealot and even then it’s mostly just headshots against trash mobs. So your focus needs to be on reducing TTK and therefore on landing as many hits on a target as fast as possible. That being said as it’s cleave is abysmal (it can cleave two cata slave rats

) you do need to be using pushes to help control the horde and get stagger damage on some of the trash. You also need to be utilizing dodges well so dodge range and movement speed will help you avoiding damage from enemies you can’t/didn’t stagger.

I’m not sure what to say about being unable to hit enemies with the weapon due to animations not lining up. It’s just something you have to get used to, personally I quite like the current light attack animation chain and am too used to enemy stagger animations to say much about your problem.

Overall I think the axe is fine on most every official realm difficulty save maybe some twitch settings. It’s big problem is that the role it excels at is doing damage but since it doesn’t quite reach many useful breakpoints it can be a little tricky to convert damage until kills. Like most melee weapons it’s best on slayer and zealot but with proper technique it can still shine on RV and BH.
RV revolves around ales and for BH you need to be stacking melee damage so something like hunter on ranged weapon and either steel crescendo or open wounds; open wounds is easier to use since it takes less ammo management to keep the buff up.

It’s not meta, but it should do, wouldn’t sweat if you don’t have full red gear. It’s crit chance is so high that you can keep swift slaying up reliably.

Primary horde weapon could be gooseguns. A well placed shot can thin out hordes dramatically. If you don’t have that DLC then Volley is probably an ok substitute. Just got to blast the trash so you can chop up elites without getting surrounded.

You have the right idea with stacking attack speed as that reduces the time to kill but you should also consider more crit chance.

Yeah! That’s what I ended up running with. I think I have at least 15 percent base, so 25% total on light attacks. I appreciate the perspective from Cataclysm. I’ve been using it with Witch hunter captain but also gave it a shot on bounty hunter and zealot. Zealot was the one I was most excited for maybe actually working out, with breakpoints on full stacks, but I ended up just having an easier time with the flail, both in mopping up trash and killing chaos warriors + storm vermin.

That combined with the massively better hoarde clear options the flail just won out for me.

I do wonder, though, if there’s a certain level of competence you reach in this game where every weapon basically works fine regardless of whether or not it’s comparable to any of the others? Like, I could imagine that a skilled player would have a much larger tolerance for a weapon to be underpowered before it makes them start losing runs.

Primary horde weapon could be gooseguns. A well placed shot can thin out hordes dramatically. If you don’t have that DLC then Volley is probably an ok substitute.

Yeah I definitely have a different balance landscape than DLC owners. If I had pidgeonfoot pistols I might actually struggle a lot less with 1h axe. For me, for now, it’s just vanilla Vermintide 2.

Saltzpyre has a lot of nice options for dealing with heavy units too. From my personal experience I feel like flail and rapier are just all around better for both hoards and elites (flail with it’s sweeps + overheads and rapier with it’s very fast heavies + hyper lights + block-shooting). I don’t see Axe beating them out in any way apart from, perhaps, crit chance, which is great but I don’t think it’s brings it up enough to compete.

And I’m totally fine with just not using the 1h axe. That’s kind of what I’ve resigned to. It seems like, yeah I could make it work if I really wanted to use it, but other options are just… better! I just feel bad for the poor thing.

1h axe is weird. It’s the weapon I have the most fun with on all Bardin classes, but it feels really underwhelming on Saltzspyre. I realise this makes no sense as they are the same weapon.

I have the opposite experience, love it on Saltz with Assassin, hate it on Bardin.

It definitely needs helping out however.

They should pull Shard Strike from Chaos Wastes and put it on terrible weapons like the 1h axes only. I’m not sure if I’m actually joking right now either, I had a shard strike axe with the griffonfoot pistols earlier and I didn’t hate it for once, since the constant metal weave effect helps with hordes and dealing with its non existent range.

To be fair, shard strike is just another of those silly overpowered gimmicks they threw in there for fun. It makes any weapon&build that can kill elites to activate it except the “dash on push” work.

Similarly that “stagger on crit” trait is also silly powerful when possessed by someone who can activate it somewhat well.

Yea but the 1H axes are so inherently flawed unless we dropped the horde density down to V1 it would still not be a good weapon. Probably easier than completely overhauling its bad attack animations and damage.

Did you not play pre-WoM? From 1.3 to 1.6 1h axes were quite a common pick except on elf. Crowbill is just a reskin of the 1h axe and it was one of the most meta weapons in the game.

Another night and day change to the game where the valued properties in weapons changed overnight? Yeah, but it was still not a good pick before then either. It just became much worse when enemies became more durable in melee combat and dodges were limited, it’s not like you took a good weapon and nerfed it.

To be fair when crowbill was introduced it filled a niche Sienna’s other weapons didn’t, even mace was/is more hybrid, crowbill was the first to fill a more dedicated anti armour niche (until flaming flail came along with its anti-shielded enemy capabilities). On Bardin and Saltz you always had more choice than just 1h axe when it comes to strong AP melee.

Since then crowbill has largely been left in the dust while other weapons like mace were buffed.

For me 1H axe is one of best weapons in the whole game. Yes, it is not good against hordes, but it is excelent against everything else. I did a video long time ago about Cata run with all Tomes with an axe. If you watch it then beware: Quality of the video is horrible and my skill on it is horrible too. 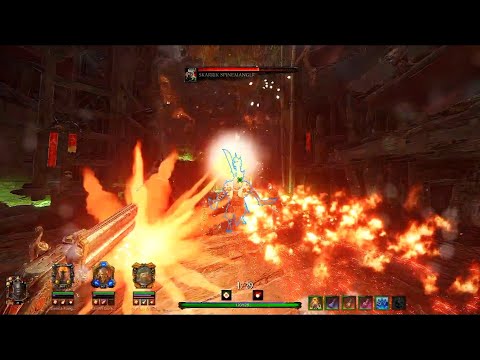 I’m just saying that it’s completely disingenuous to claim that 1h axe will never work “unless we dropped the horde density down to V1.” That’s just a stupidly hyperbolic statement; and the fact that it was a perfectly good weapon in V2 Legend for a significant period of time proves that.

I mean it was perfectly fine back when spamming dodge made you borderline immortal, but was it ever good in the way of having a defined niche it excelled at? I don’t think so. Its DPS (especially against infantry) has always been rather low for the level of control it puts out. So I do kinda agree that without pretty fundamental changes it will likely never find a niche in V2.

Forever ago Sienna used her version of the 1H axe because her melee kit was so lacking against armor her 1H mace didn’t even have that overhead heavy it does now and there was no flail either. And it worked because enemies didn’t really track during their attacks and dodges were unlimited. Not because the crowbill excelled or was particularly strong (after they fixed the power scaling on it since it was too powerful on launch and probably convinced most it was a much better weapon than it would later become). Similarly the 1H axes have fallen into irrelevance since other low cleave weapons destroy them in DPS. Kinda hard to balance against the dual weapons that are even faster and strike twice per attack.