I’ve long thought BH would have more competitive options if the other 1h weapons also came with the rapier pistol, so I certainly wouldn’t complain.

On the other hand it could be seen as something that homogenises weapons a good bit, which could definitely ruffle some feathers (which I’d completely understand).

Would certainly be curious to see what others think of the idea. Regardless it’s probably a bit radical to be a realistic change at this point but who knows what FS has in the works. They do pleasantly surprise us from time to time.

Do you also want Bardin to not have 2 Hammers/2 Axes ?

I don’t think that’s the argument he’s making.
Saltz does have Axe and Falchion after all and that doesn’t seem to bother OP ; I think the main point is about Saltzpyre’s off-hand pistol gimmick and the fact it is being underused, with a proposal to add it to the falchion and the axe.
This is what I’ll be discussing anyway :
I do think even the rapier pistol is underused despite its very obvious power : unlimited ammo with insane damage (and a huge dropoff with distance to compensate) that can be used during block and even resets parry window. It is excellent against zerkers and monks for instance, albeit a bit slow. When used on a parry rapier, you can kite and nope an entire patrol of overheading Chaos Warriors without really ever being in danger.
The fact that the off-hand pistol is barely ever used makes me think that it wouldn’t make that big of a difference if it were added to other weapons.

I don’t know what kinds of balance issues this could cause, but the only downside I see is that it would remove some ‘uniqueness’ to the rapier, while perhaps opening a bit more diversity in the weapon choices we see Saltz running (though the reason we usually don’t see WHC with an axe is not because it’s lacking a side-pistol).

In the end I don’t see how this would be a bad idea, because it would not change much, while adding a gimmick to the character (characters who, to FS’s credit, are all quite unique) ; but also since it doesn’t change much, why really bother ?
Perhaps make it a WHC trait, that he gets an off-hand pistol on one-handed melee weapons ?

Sure there are “thingies” that give an offhand melee weapon - - but isnt that the Elfs thing.
Victor should have an offhand pistol - to go with this falchion, axe, or fail - - not a melee weapon so he seems like an elf

The fact that the off-hand pistol is barely ever used makes me think that it wouldn’t make that big of a difference if it were added to other weapons.

It would be pretty big for BH to get good SS uptime without having to run max crit on falchion. Otherwise I agree it probably wouldn’t do a heap. Certainly wouldn’t be enough to make 1h axe desirable on WHC or BH.

Wait does the rapier’s pistol on BH proc Swift slaying ? I know it uses the auto-crit proc but I don’t think it does Swift Slaying

As already pointed out, it most certainly does. Yet another reason BH should never leave home without the rapier.

Making another weapon with like an offhand crossbow would be cool.

Even if the mechanics of the game were micromanaged/streamlined to let you use alt fire on your ranged weapon with any 1hander, it would GREATLY increase the value of ALL 1handers which are fully outclassed by their 2h/dual wield counterparts

Making another weapon with like an offhand crossbow would be cool.

But a Crossbow is not a one-hand weapon. The only ranged weapons which could be used off-hand are weapons which only need one-hand to be used from the get-go. And that list isn’t very long:

Not sure on the Masterwork Pistol. So yea, that would be it. You don’t off-hand a Blunderbuss or a Repeater.

You’re making me invision a 1h axe for Bardin with an off hand throwing axe on weapon special and honestly now I’m just sad that doesn’t exist.

Essentially a hand held version of the crossbow, this weapon’s exquisite construction—all steel—increases the tension in the cord when cranked, thus making it a worthwhile addition to any warrior’s arsenal. Better still, given its small size, it’s an...

Doesn’t change what I said before. From our current arsenal the choices are very limited. Including new weapons like a mini-crossbow are technically possible. Although you would need to add a reload function to melee.

Oddly enough repeater pistols are actually used by steam tank commanders ( one handed) and a sword in the other.

They are either flintlock or matchlock.

His rapier/pistol combo with near infinite quick shots is entirely lore breaking whereas a repeater pistol with a sword is not. 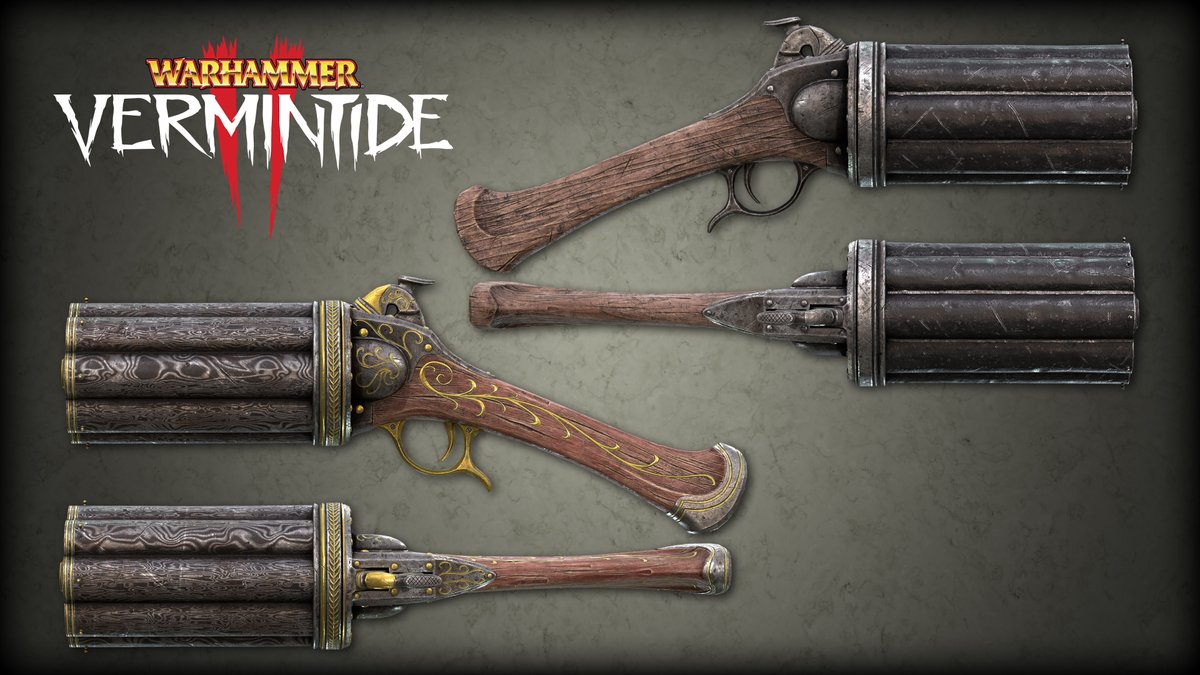 The Repeater Pistol, also known as Von Meinkopt's Micro-Mainspring of Multitudinous Precipitation of Pernicious Lead, is a smaller version of the Repeater Hand Gun, and is fired in one hand, leaving the other free to wield a sword. The weapon has a...

Salty’s BoP reload would only be accurate if they were single shots with long reloads, not 6 shooters or something you can nearly infinitely spam with a rapier.

That being said. Being able to block while reloading is super cool <3

Including new weapons like a mini-crossbow are technically possible. Although you would need to add a reload function to melee.

The followers of Malekith adopted the crossbow through the close contact between Nagarythe and the Karaz Ankor during the reign of Bel Shanaar.[3a]Since then, the Elves have learned how to create repeating crossbows that can fire multiple shots before needing to reload.

Which is the idea behind the volley crossbow.

DE Corsairs use 3 shot 1 handed crossbows too. They actually exist in the WH world… unlike Salty’s pistol that he uses with rapier