Reviving someone is absurdly difficult

Just before I played a round of Darktide, I played some rounds of Cata3 VT2 with some friends. I had a few times where I had to rez some teammates, so this mechanic was fresh in my mind when I was playing DT. I could even manage to get a rez off during very intense Elite waves while being pretty much in the middle of them all.

Then I went into Darktide, hazard 3 (which is around Champ difficulty right?) and found myself incapable of reviving anyone as long as there was a single trash mob anywhere near me unless I was playing an Ogryn, and even then it felt very awkward. All my rez attempts would get blocked if seemingly anything was around me, even if I use Psyker ult and immediately try reviving I’d still get some random trash mob messing up the rez for me. Not to mention how much ranged units mess it up upon hitting you as well, like 2 shots from any ranged unit is enough to completely neuter the revive attempt.

It feels awful coming from VT2’s revive system to this incredibly weak, gimped one where, if your teammate is in a medium sized wave, there isn’t a chance in hell you’re getting the revive off unless you get an ogryn to pull the entire wave off of you while you try it, and even if you attempt it all that’s gonna happen is your own block is gonna break, along with your toughness and most likely you yourself are going to get knocked down.

Aside from that though, it feels like it’s hard to even start it like maybe the hitbox on rez is way too small or something, and the rezzing itself also feels like it takes a lifetime once you somehow manage to start doing it, and I’m also not a fan of the UI that only shows up when you look down towards the fallen ally, rather than being a big obvious bar on top of the UI no matter where you look.

Am I the only one that feels this way about revives?

It would be nice if Rez-speed came as a stat on curios. 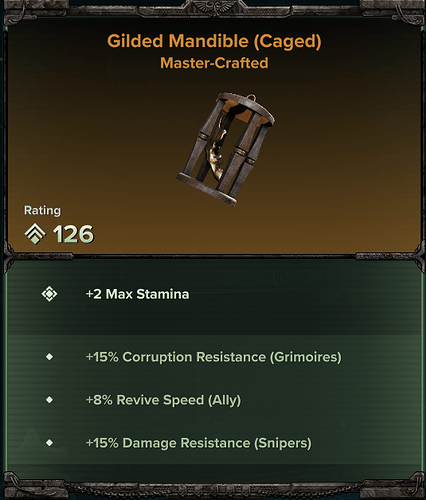 Ah, didn’t know it is on there. Nice!

They also need to anchor the progress bar of everything (revives, ledge saves, net freeing, interrogators ) to a set location in the HUD instead of it being diagetic because half the time it’s off screen and you can’t tell how far along the action is.