Today is a big day in the world of Darktide - we’ve got several exciting things happening, and this is just the beginning. Let’s get into the meat of it, shall we?

Another year, another Skulls! We’re thrilled to share that we are once again attending this virtual festival packed full of grim and dark goodness. This year, Darktide is participating with a world premiere of our ‘Rejects Will Rise’ trailer.

Get a taste of the dangers that await you in Tertium Hive below: 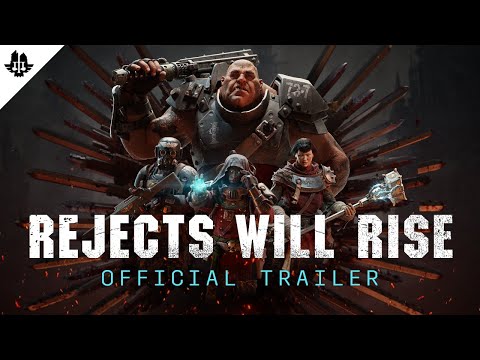 Early birds will receive the following bonus items with their pre-orders of the Standard Edition & Imperial Edition, at no extra cost: 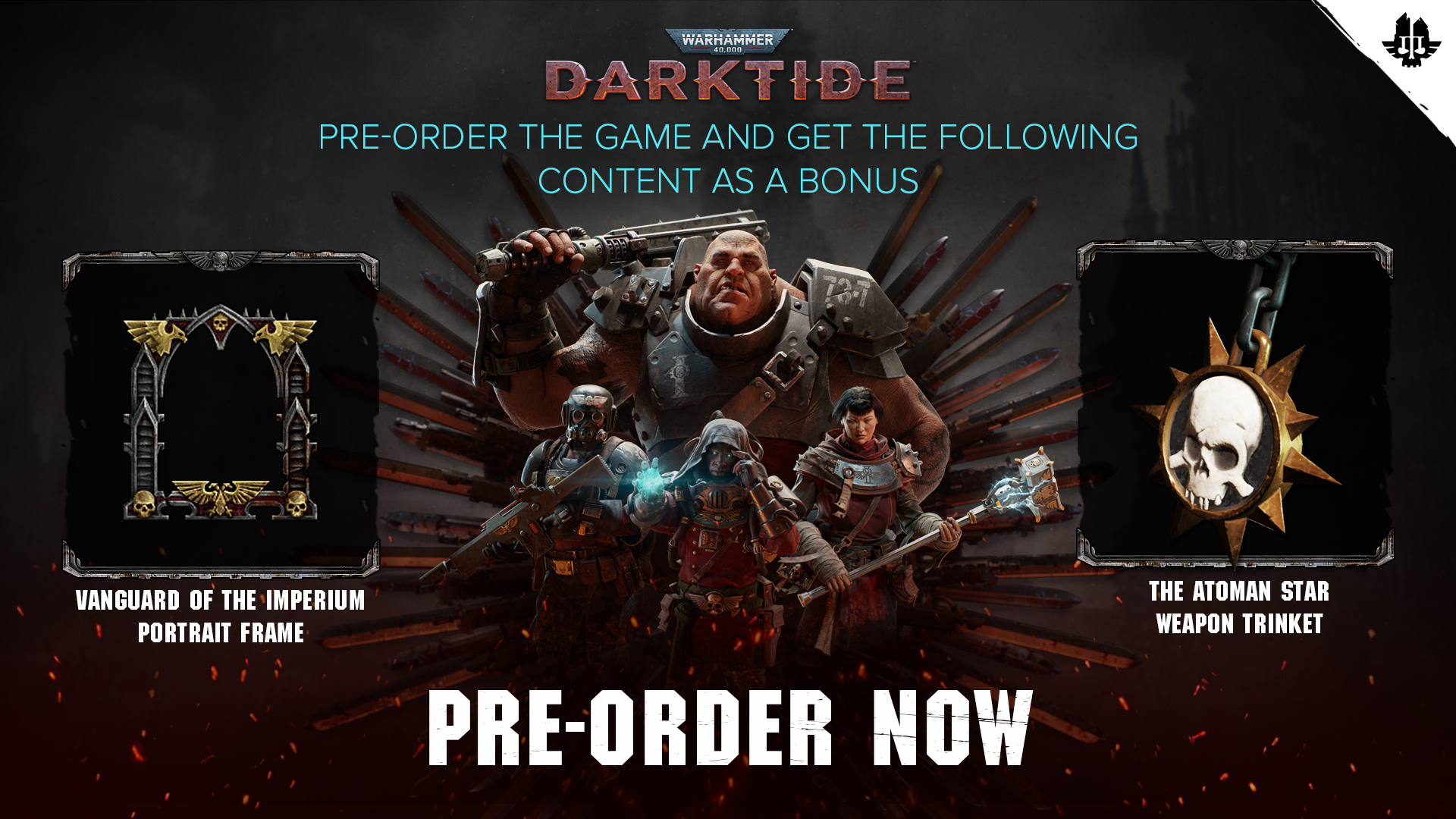 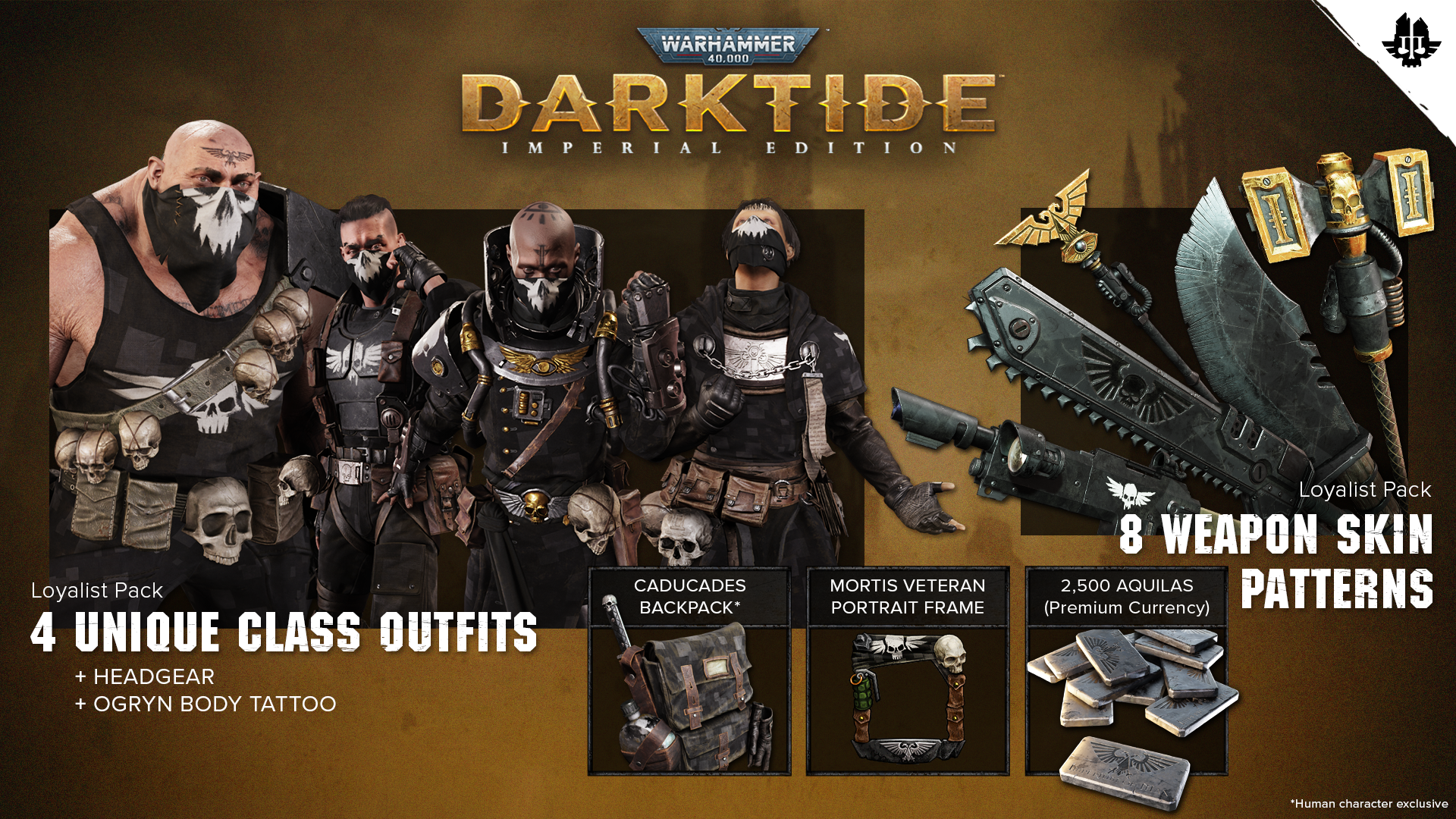 In addition to today’s news, we’re also excited to announce BAFTA award-winning Jesper Kyd as the composer of Darktide’s official soundtrack. As some of you may know, this is not our first collaboration with Jesper - he’s also responsible for composing the iconic soundtracks of Warhammer: End Times - Vermintide and Warhammer: Vermintide 2.

If you’re itching to get a sample of the official soundtrack of Darktide, you’re in luck! It just so happens that the Rejects Will Rise trailer was scored by Jesper Kyd as well. We hope you like it as much as we do and that you stay tuned for the soundtrack reveal in the near future.

What platforms can I play Darktide on?
The game will be available on PC (Steam/Microsoft Store) and Xbox Series S|X.

Which digital stores is Darktide available on?
Darktide will be available on Steam and Microsoft Windows Store, as well as the Xbox Store.

The Imperial Edition contains ‘Aquilas’, a premium currency. Does this mean there will be microtransactions in Darktide?
Aquilas are a premium currency that can be used to purchase premium cosmetic items in the in-game store.

Wait… I have to buy all cosmetics?
Nope. The in-game store will not be the only way for players to attain cosmetics. Players will also be able to earn some cosmetics through in-game milestones, such as progressing through certain points of the story.

Will you only sell cosmetics in the in-game store?
We will focus on cosmetics at launch - but we also are open to other offerings and will look to players feedback to evolve that over time. For example, Vermintide 2 players were happy with the Forgotten Relics weapon pack introduced alongside an entirely free Game Mode. This is not something we currently plan for in Darktide, but we don’t want to limit ourselves, either.

I don’t know much about WH40K - what should I check out or read up on?
There are some great reads to get you familiar with the human perspective in Warhammer 40,000 – we recommend the books of Dan Abnett (the ‘Gaunt’s Ghosts’ series and ‘Eisenhorn’ series in particular).

Warhammer40000.com is another great resource as well as the core tabletop books.

We hope you’re strapped in, Rejects, because you’re in for a ride. Over the next few months, we’ll be sharing much more in-depth information and news about the game. To ensure you stay up to date, don’t forget to follow us on our social media, hop into Discord, and sign up for our newsletter.