Been playing a few games today watching Sienna use her staff like a machine gun with unlimited “ammo” plowing through hordes, watching Kerillian having apparently the biggest quiver as she never ran out arrows playing entire maps using only the bow.
And no not saying either of those should be “nerfed”.

Then there I am as the witch hunter captain that can barely kill a basic skaven from 2 meters away with headshots.

In short, the thing feels weak as all hell.
Yeah it doesnt use ammo but it can only be fired at around 1 shot per second and I get that its main use is to be weaved into melee combat but the damn thing barely even works with that.
It should have the same range as a normal pistol in my opinion so it can actually be used at least at mid range.

Edit: A test of damage between the sidearm and normal pistols with bodyshot and headshot. I mean come on, its not exactly sniping range here. Even if you go into melee range, right up to the target, the sidearm still doesnt do the same damage as a normal pistol. 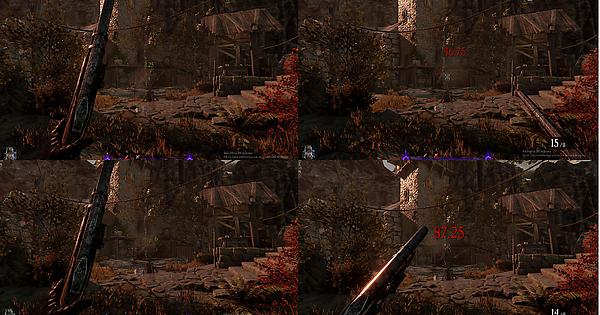 I use the rapier a lot and yes the pistol is weak but it does pretty good job with specials as it stuns them for a second. But I would preffer limited ammo and higher impact, it doesnt feel strong enough in current state of art. Not sure how it works with level 25 skills - does it get any better?

Not really. I tested it on a basic chaos marauder without a shield from just a few meters away. Took about 7-8 shots to the body to kill it and 3-5 headshots. Thats just bad.
It shouldnt be good at long range but it should have the killing power of a normal pistol at close range at least. Witch Hunter doesnt have that much going for him so that would be a good buff to have imo.

Yea I miss that panic button when you meet the packmaster just behind the corner. It worked that way in v1. Bounty hunter at high level has probably some imrovements for the pistol.

[quote=“Ingvarr, post:4, topic:18939, full:true”]
Yea I miss that panic button when you meet the packmaster just behind the corner. [/quote]

played salty main in V1 and yeah, thats how it worked

I was playing legend other day and there was an Elf which did 700 kills with swift bow, killed every storm vermin with his F, 3 at a time. And all of this was after i read
here about incredible nerf for Kerillian, that people kicking her right away, cos she is useless now.

I wonder what kind of people making those threads.

And yeah, at very least not being able to kill a slave rat with rapier pistol is just annoying as hell. It shoots to slow to be op anyway.

It hits harder than a fully charged rapier stab at a greater range. One-shots basic enemies within a few yards in my experience, and staggers armored enemies while dealing a bit of relatively safe damage. If you’re expecting it to be an actual ranged weapon, you are setting yourself up for disappointment. But if you pepper it into your melee combos, it’s pretty solid.

My rapier stabs do significantly more damage than a headshot crit from the sidearm at point blank range.

I have posted this before but I’ll reiterate it again.

The issue with the rapier is that everything it can do, the falchion can do better. The falchion is better at damage, it cleaves, it still have headshot bonus, it can chew through armor, stuns, and can still eventually break shields. The only thing the rapier pulls ahead in slightly is horde clearing but the falchion ends up being better majority of the time because the second you get one armored or shielded unit in a horde the rapier comes to a grinding halt. This would not be so bad if the pistol could do what it was desined to do, deal with said armored and shielded units. But, a t point blank it is very hard even for a seasoned player to land a headshot or meaning ful hit with the pistol at point blank which also leaves you open to get hit since it’s so slow. The only way to use it and not get punished is to dodge backwards then fire it, but due to itsassive damage drop off the damage goes from 50 on a head shot down to around 20 from just dossing backwards, which at that point you can still poewer attack with the rapier so it’s always a better choice. Where now the falchion you can just keep wacking and hacking.

The only way I see the rapier being able to keep up with the falchion and regain it’s unique feature the pistol, is either, A give it ammo which I don’t think is possible at this point without major work, code wise. Or B reduce the damage drop off of the weapon so that a Dodge backwards will still deliver around 40 damage, but then reduce it further as youove back.