Which were already completed. Do we really have to complete them “again” ?

Do you mean the complete weave 1-40 challenge?

I find it a bit weird as well that even though they didn’t get reset, we still gotta do them all over again.

I do indeed mean that

This means that if you don’t do them in order, or skip one by accident, you won’t be able to tell which one you have yet to do.

Nonetheless, I completely support some kind of indices for each Weave. Because the Okri’s challenge counter takes every playstyle into consideration. But if you have done Weaves already in team and you want now to do them in three man group or solo, then you have no indication which Weaves you have done in that Fformat already other than the leaderboard which just looks at the highest completed Weave.

So yea, they should make some kind of task list upon clicking on a Weave which then gets checkmarks depending on what you have done:

You are right, I completely forgot about that. There’s a very good chance that it still works that way in season 2. It is not as obvious as it could be, but at least those who did not do them in order will have a way of finding out which ones they have yet to do.

I have done all the first 5 amethyst and light weaves but spread out during 2 seasons, yet I do not get frames, so the system is definitely bugged. I check my completed weaves and it shows 1-15 have clearly been done yet I only have the frame for the 1-5 celestial weaves which I do not understand, perhaps there is a chance that I did the 1-5 weaves in season 2.

Well I don’t really mind the decision but it could be great to know if it’s a bug or if it’s intended, so we can know what to do with them (or else, to not lose time with them if it will be fixed during season).

Will ping @Fatshark_Hedge so he can ask

The 1-40 challenge that you find in the season 2 tab in okri’s must be done again since it’s season 2 now. The problem is this. 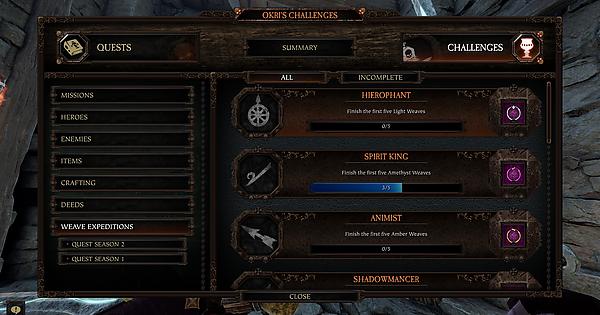 The first 5 Light weaves are completed but i didnt get the frame, seems like it doesn’t count at all. The completed weave list is a mess now, because you do not know which weaves you have completed and in which season. These frames are not supposed to be bound to season.

Yeah but as thoses weaves are already unlocked to speed you up if you’re good, so you don’t have to play recruit weaves. It’s seems a bit illogical to make you do them again for the frame. So I’m not sure that is intended

I’m with Bomber. I am pretty sure this is intended but not thought through. Most likely, it is copied from Season 1. Well, if you have at least three people you can speed through. Or you are trying do solo all 40 of them.

Well only fatshark knows if it’s intended or not so I wait for an official answer on this one. (I just find it strange to do that if you unlock the first 40 at the same time, especially when we have all thoses others challenges which complete priori difficulties at the same time)

Bumping the thread to at least know if it’s intended or not.