I’m one of the 5 people that play on Microsoft Store and while I hadn’t experienced any crashes or disconnects there is a problem that latest update did not arrive or at least I haven’t had any notifications nor did I get a report that anything was downloaded. Barber still has name “npc_barber_string_not_found”. Is there a way to see what game version I’m playing on ?

Hello i would like to join the question, so i play the beta through the microsoft store, and it looks like microsoft beta is not getting updates, the beta version installed for me has a number 1.0.182.0 .
P. S. when you click on the Darktide beta test in the microsoft store, when store page opens you need to scroll to the bottom of the page, version number is in the left corner if you have it installed.

So few of us we must be low priority to them. Pretty disappointing.

Correct, I’ve posted on reddit and got replies that apparently MC store doesn’t support rapid development and we won’t be getting any updates until 30th. But that source is “trust me bro”. Unfortunately I think we will be ignored until launch day…

Had a message from FatsharkLev from a ticket I made earlier. I’ve seen he replied to banquet too who also raised our issues.

The process to release updates to the MS Store differs to Steam, and this is taking slightly longer.
We’re working on it, and the updates are coming as soon as possible!
Apologies for any inconvenience in the meantime.

In Protest, I won’t bathe my Ogryn Eddie until we get a patch lol

I just got confirmation from Lev on my support ticket that we’ll get all updates on the 30th bringing us to full version. But we may or may not get any beta updates before then.

They need to provide at least a timeline. Buncha bs not to give that.

I just asked if this is how the entire release is going to be too. With us being left behind until they get to it. I certainly hope not but this is already extremely disappointing. Makes it even worse that there is full carryover now as well. We are completely missing out on stocking up on crafting material and cosmetics.

ntil we get a patch lol

Agreed, we should at least get some compensation

Im playing on the microsoft store version as well and…

Compensation would be appropriate at least. 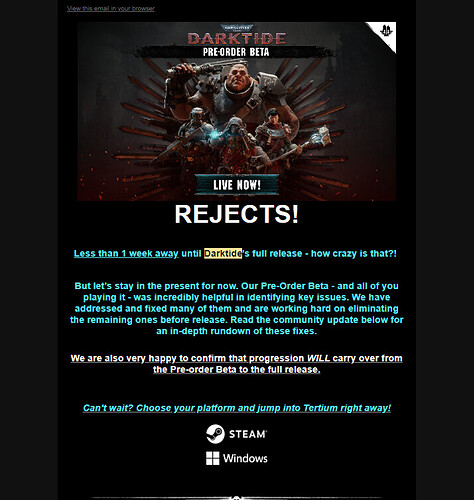 image716×754 152 KB
They even sent us email where they boast about bug fixing and patching the game and they said its avaliable on both platform as seen in this email. Its misleading at best
3 Likes
woebetide November 27, 2022, 5:48am #16

Can’t help think that the majority of crashes we’re now suffering on the MS store client would have been fixed by now. The client we’re testing is 2…3 versions behind the steam one? Someone tried to join my fireteam yesterday might have been Aspect lol , my first game, I crashed and thought “What’s the point?”

I hope the way the Microsoft Store version has been handled isn’t some sort of precursor to how it’ll go on game pass. One would hope with game pass we’d have more people playing and more of a community voice that they’d at least take notice and maybe try to patch along the same time as Steam.
We keep seeing all the posts from twitter about we’ve fixed this, we’ve fixed that and we’ve introduced x this patch.
One can’t help but feel jaded.

We need a response to this fatshark. It’s horseshit.

Just got a response from Julia at Fatshark :

with 2 days till launch I’m not expecting ANY patch now.

I haven’t been able to play anything other than the prologue because of a hot_join_party_hub_failed error. Does anyone know how to remedy this? I just want to play the dang game already…

And I’ve tried a VPN.