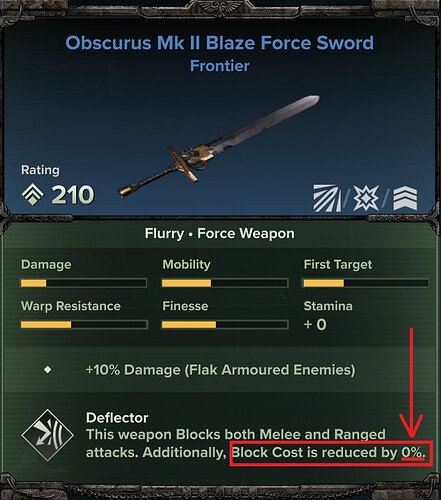 I mean, it’s a sword that’s giving you the ability to block bullets, are you really that upset at no block cost reduction?

so why the “additionally” ?

Blocking ranged attacks is great. But if the Block Cost is reduced by 0% (not TO, but BY), i.e., it does nothing, why is it even mentioned in the tooltip?!?!
I don’t see any way of rolling stats in this game, so there’s not like there’s a menu where I can re-roll it and it’s 5% or whatever.

It’s also still in the Beta phase, and it could be that the block cost reduction is a stat that can roll in a set range, that said, I do agree that 0% shouldn’t be part of that, as it seems they only display % changes in whole integer amounts, never out to decimals.

Calling it a joke though is honestly the big problem here. If you want to give feedback, give constructive feedback. If you turn to a mocking thread title with a screenshot, but nothing to work with, it’s less feedback and more ‘a complaint’ or just strait mocking. Which most folks don’t tend to want to listen too or work with.

I realize it’s probably a placeholder.

There’s not much feedback to give, really. I’m mocking it because it’s silly. Stating a 0% “decrease” makes no sense. Makes me wonder what other stats are just placeholders.

My feedback is the same that I’ve given in countless other threads and other players share this sentiment: the game is horrendous at communicating what stats affect and don’t affect. It’s just a bunch of words that vaguely represent something without a clear indication on what it does. I still don’t know what “Mobility” and “Finesse” are. Or what exactly “Warp Resistance” does, etc.

Side-note, there was a thread recently where someone tested two identical weapons with a large stat difference (both in bars and numbers), and the weapon with the lower stats AND bars did MORE damage. Now either the weapons are broken, or the Meat Grinder is. Either way, it’s not good.