For two reasons really. The old one looked much better visually because it was a smooth comet-shaped fireball. The new one doesn’t seem to have the same “framerate” as the old graphics because it tends to stretch out and look sort of like a string of beads.

Secondly the new sound seems bugged the same way Sienna’s crowbill was on release. The noise does not scale properly to distance and seems to devolve into harsh “static” instead of a discrete sound bite.

Dunno, to me it looks rather good, but I guess the graphics are not always working as intended.
But I actually like the new sound, it reminds me of a jet engine

I haven’t played Pyro in a while so I switched over and tried out the ult a few times. When I’m playing pyro myself it seems to act normally. The fireball leaves behind a line of flame and makes a “FSHOOOM” sound. 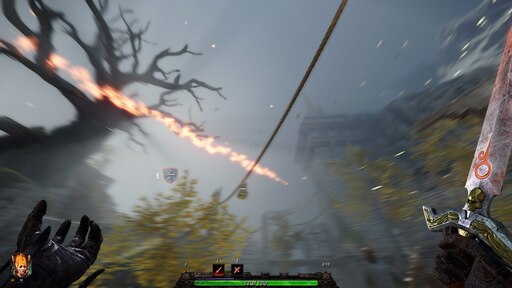 However this is not what I see in a game where someone else is playing pyro. The trail of fire just looks like a thin bright line, almost a laser. And instead of a smooth trail of fire the “skull” appears like dots placed at 1 metre intervals on the line. Like a string of beads in other words. The sound is also not as smooth. It sounds full of static, does not scale to distance and instead of “fshoom” I get something like “KRCHFSHR”.

I think it could have something to do with the level of detail settings. Since I’m not the one playing Pyro it treats the sound and graphics as lower priority and they appear at a very low detail despite my maxed graphics settings. The old burning head didn’t have this problem.

It’s bloody horrifying. Scares the living crap out of me everytime. At least it reminds me to turn down the game volume lol.

I liked the original Flaming Skull from the first beta, it was a skull made of fire, not a skull on fire or just fire.