Unless you have a contract, there is little point to picking up grims and scrips. Extra money/exp? Who cares about that at 30? Once a player has finished whatever contracts that require picking these up, there’s very little reason why they would bother picking them up later. Players that still need to finish a contract will likely have to settle for picking up just 1 per mission if no one else decides to help them with it. There is also a LOT of drawback for picking up grims and the reward does not match the risk at all. This was different in Vermintide where it contributed to better chests, but there is no such reward mechanism here outside of extra cash, which will very shortly lose any meaning for players that are 30 and have banked an obscene amount.

Perhaps if there was an overlevel mechanic like in Vermintide where you are rewarded a random weapon or curio for each subsequent level, that might add a little more meaning to it (extra exp would then matter). There should still be something else, though. Maybe reward extra currency for acquisitions for each scrip and grim that isn’t part of a contract. That would make some sense.

Agree, even looking for books in 3+ diff lvl is pain in ass honestly. At these levels your hp with or without grims doesn’t matter honestly. But I did Chasm Logistratum many times today but I don’t think I ever found 3 books with the team. It’s just awful to look for them. My weekly task looks actually like this… 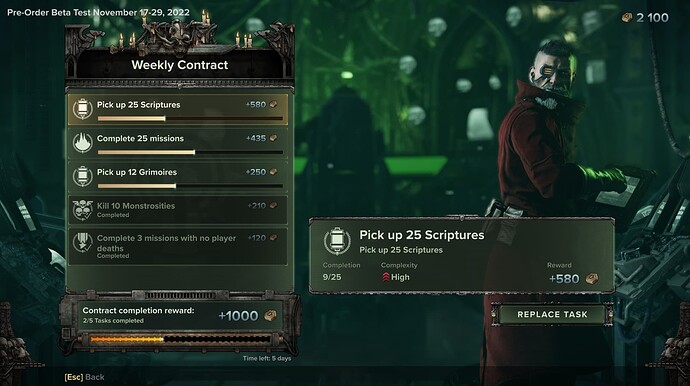 I think that scrips are fine as they are. They have zero downsides for collecting and don’t increase the difficulty much.
The main issue is that there is zero reason to run a grim mission, because if one random player collects just one you lose one down for no reason, and people do not like getting rid of them.

Instead how about making it so that grim missions instead give out a free item/weapon at certain qualities.
So a level 1 mission doing the grims would atleast guarantee you a grey, but you can have let’s say a 5% chance of getting a green.
You can increase the quality of items as the difficulties go up, but they should remove some as well. No one wants a grey or green item to come out of a level 3+ grims mission.

Obviously you don’t get a item if you only collect one grim so the slight money and exp boost are fine for one.

Scrips don’t increase difficulty at all (unless you count not having a item pickup as extra difficulty), but again, there’s still the question of why even bother doing it at 30. You don’t need exp, and a little extra cash won’t mean anything.

Yea it’s a different challenge to figure out what one should do with scripts, because they offer little in the way of a challenge. There’s your suggestion that has a over leveling mechanic. I suppose you could also have them give out that weekly challenge currency instead, maybe in small amounts

Agreed. Theres no purpose to them at max level unless you need them for the weekly contracts as the bonus XP is not used for anything. The grimoires especially need something cool added to them considering they significantly make the mission more difficult. Something along the lines of for each grimoire you get, it increases the chance of getting an emperors gift, and a good quality one. As is the secondary objectives are woefully lacking compared to vermintides as in that you got loot dice so there was a benefit to getting them

Could at least add a research penance that has you working towards some kind of goal. It could be kind of annoying in itself, but if the weeklies requires pickups and it will eventually aff you a curio or two it would at least feel like it’s somewhat worthwhile.

I think they would probably have to balance out the cost of discarding weapons if you were given a gift for picking up grims.

This is a great topic and point of feedback.

In VT2, with the fixed tome + grim locations, at least you had some efficiency when it came to picking them up AND there was a very tangible reward in terms of affecting chest quality.

Maybe when the crafting system goes live scripts + grims can also provide a bonus to crafting materials? Or maybe a small amount of fancy currency to use in the scriptorium outside of just completing the quests?

Yeah, I was thinking more like an extra currency to spend, either on those contract item options (whatever it’s called), or something else entirely, which could be anything really… another idea maybe is a currency for customizing your weapon or other options like the way shillings worked in V2.

There was an overview video released yesterday (?) that shows the crafting screen. There are actually dedicated crafting resources, similar to Vermintide 2, that you can use for customizing and upgrading weapons. Grims + Scripts could provide those crafting resources as an option.

All of this talk makes me wish that Darktide basically used the same set of mission rewards / crafting / customization stuff that Deep Rock Galactic uses. DRG has such a fun loop for crafting and item progression by comparrison. I’m not sure who designs the 'tide series crafting and progression system, and who they are designing it for, because it always feels like it’s about 20% of what it could be (even with VT2 after all these years it’s still a major weak point in the series).