In the service of mankind and the defence of the Imperium nothing is outwith the reach of the Inquisition.

Kroot have existed in the 40k universe since 3rd Edition (1998), first being reference in the core rulebook alongside sketches of alien monstrosities in a somewhat prison line-up setting. 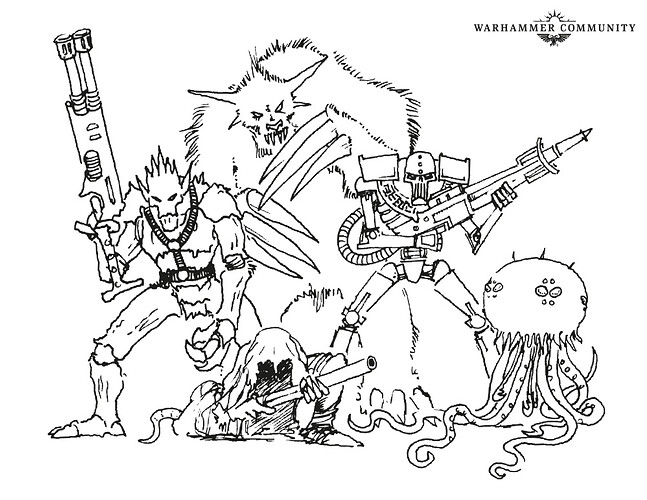 kroot1000×772 192 KB
(notice the Hrud with a rat like tail at the bottom. Shame that we didn’t end up getting space ratmen in the end)
3rd edition is widely regarded as the point where current Grim-Dark 40k finally found its feet. Next year will be the 25th Anniversary of its release. What better way to celebrate this than to incorporate something stranger and unfamiliar as the option for a player character?

Over the course or the last 25 years the spread of Kroot beyond the borders of the Tau Empire has been documented across various books and game systems. Mercenaries to the highest bidder in the service of Inquisitors and Rogue Traders, they fight for coin, technology and biological resource.

How would Kroot fit into the setting? In game dialogue suggests that prior to the assignment on Atoma Prime the Inquisitor was dealing with a Genestealer Cult. Kroot have an innate ability to detect the taint of genestealer genetic material in the flesh and scent of those infected. An Inquisitor fighting a Cult would find these traits indispensable in his retinue. With the splitting of the Galaxy by the Great Riff/Cicatrix Maledictum it is possible a Kroot mercenary band could have been stranded in this region of space. Desperate times make for strange companions (Vermintide proving this rule). I assume as seasons progress the introduction for new characters will not necessarily follow the prison ship opening sequence. This is a key assumption, there’s that saying about assumptions though…

In terms of relationships with the squad I’d imagine the Zealot to be the most antagonistic only kept in check by the potential wrath of the Inquisitor/the need for survival, followed by the veteran. Psyker being unphased as they seem the most stoic/philosophical, they have also likely encountered stranger beings. The Ogryn being more concerned about what they taste like and how good they are at fighting. Points of commonality, talk of fighting Orks with the Veteran. A love of eating things with the Ogryn and the Kroot weapons being big and loud. Speaking about strange beings with the Psyker (Enslavers etc). Bickering with the Zealot. Speech and personality are basically an open book. Kroot can mimic and converse in human dialects.

In terms of gameplay speed would be the primary factor with a focus on light attacks, dodging and lots of bleed. Kroot rifle (serving as a melee weapon think bat’leth meets flintlock rifle), dual Kroot pistols, knives, bow/ballista for higher damage. Kroot are also proficient in using alien (humans count here) weapons. This could even tie nicely into an Inquistorial update introducing more exotic weapons of alien/unknown/ancient origin that the rejects would have access to after becoming members of the warband.

Special ability: Kroot Hound.
Called from offscreen, in the same way that the Pox Hounds appear and incapacitates human or Ogryn sized enemies. Set damage done and pinned for an amount of time. Dealing set passing damage to abominations or being able to be utilised against Captains when their personal shield is down or just doing a chunk of damage to the shield. The Hound then leaves the screen much in the same way that the Pox Hound does if it fails to attack or survives being removed from a player.

(I could actually see this mechanic being introduced as a Veteran class either Arbites or Enforcer with the Kroot hound being replaced with a Cyber-Mastif.)

Passive: Prey Stalking
When a special or abomination enters the map the Kroot will see its outline through terrain

Use of human medicae systems can be handwaived by Kroot physiology being highly adaptable and by this time it is quite likely that they share some human genetic material themselves.

I doubt we’ll see birdmen from across the stars make their way to the game but I am hopefully that we will see stranger allies to fight alongside against as the game progresses.

I admire your conviction but to be honest other types of guardsman or people from other branches of the imperium a far more likely. They all more likly to be in the comming rougetrader game.
Still admire your dedication. Keep going.

Definitely. People should post ideas because it might not lead anywhere but it could get people thinking about something else or be applied elsewhere.

Grah! A good fight. Can we feast now, Shaper?

I’ve always been down to include Kroot/Tau/Eldar/Ork/etc. The only two types of characters I think probably wouldn’t fit at all would be Chaos/Tyranids. But yeah, cool idea.

Noticing new messages in the dialogue about possible Xenos sightings in the lower levels of the Hive.