Am I the only one who thinks blightstormers need a hard cap on how far they can cast? This isn’t even the worst of it, on some places in Against the Grain they can cast from so far away you can’t even ping them. 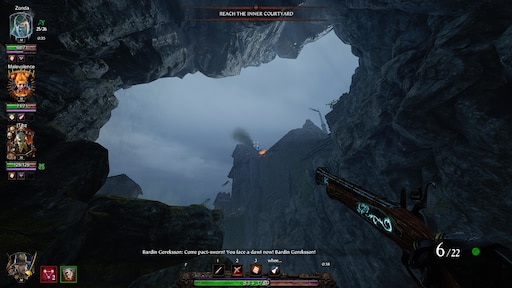 No, this is totally fair and balanced /s

Normally I can figure out their location from the casting line and take a shot in their general location. At those distances, it can take 3+ shots to take them down. The real problem is when they cast outside your line of sight, they curve the casting around objects, you can’t see them at all.

I think part of that is just level design as the caster is still in bounds but just at a part in that map that is still pretty far for the players yet distance wise still close enough to the players and in sight. Normally though casting is not performed at that range, typically that’s the distance/area that the AI would jump to for safety after taking fire. Against the grain though for me is notably the most common case for these long distance casters.

War Camp is worst where you have to drop down to light the three candles for the grim. Casting from up a mountain in the distance hidden behind trees and rocks is impossible.

Idk, it adds to random fun of being wiped.
I don’t think fs should do anything about it.

i don’t think “Fun” and “being wiped” belong in the same sentence really. Especially when it’s due to something stupid.

The range itself is rarely the problem. Only a few maps have long enough ranges that they’re outside ping range, let alone sniping distance. More often, the problem is that they can start casting if they have even a momentary LoS, using gaps in obstructions so small that no player could shoot through them (especially at those ranges). Add in that they start walking as soon as the casting is done (probably moving behind another obstruction) and their teleporting not affecting the storms in any way either, and you have occasional nearly impossible-to-avoid storms.

Personally, I think that if the Blightwinders could only control their storm (i. e. make it follow a player) when they kept their LoS, and the storm continuing on its last path otherwise, things would feel much fairer, but I have no idea how complex programming that would be.

Personally, I think that if the Blightwinders could only control their storm (i. e. make it follow a player) when they kept their LoS, and the storm continuing on its last path otherwise, things would feel much fairer, but I have no idea how complex programming that would be.

Maybe have two different states of storm, one directly controlled and another random state where it does what it wants. Blightstormers would need to actively channel the spell to get the storm to follow players and change size to fit through doors etc. If you attack the blightstormer but don’t kill it he teleports away and the storm becomes random for a duration.