Hello everyone,
I’m new to the forums, but not that much new to the game.
I feel like in VT2 the value of team play is much less, well, valued.
In contrast with damage output, kills, and variations on the kills and damage theme, the final mission recap lacks any mention to team support, apart from revives and saves.
In the first chapter of Vermintide, while the final recap was much more cumbersome to read than the one we have now, it mentioned the times when someone covered a teammate’s back, which would be a welcome stat to show. If anything, to encourage cooperation.
Another useful thing to add to the final recap would be the amount of friendly fire damage/friendly fire incidents. I know it would admittedly be borrowed by the Left 4 Dead series, but it would still be a useful stat to show.
Showing people’s results in actual cooperation would, in my opinion, push said cooperation further, while damming the hellbent DPS attitude I too often see.
I may be a minority, but I enjoy cooperating in a cooperative game.
Tell me what you think.

There’s a scoreboard tweaks mod that inserts a FF row in the score screen. It broke back when Chaos Wastes was released, but maybe it got fixed by now. Check it out. As it was sanctioned, you could have used it in the official realm. 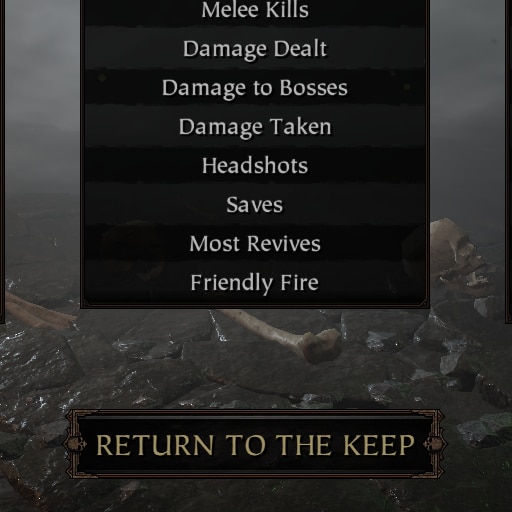 I see what you guys are saying and I’ll give it a go, but a mod is something only a few people will bother with and with any luck only I will see in 90% of the matches I’ll go through.
Again, since the game itself is cooperative it would be nice to see some “official” recognition of said cooperation, or lack thereof.

That’s maybe a bit much, but I’d settle for much less: like how the “Aided Teammates” statistic worked in the first chapter of Vermintide.
For example you gained “aiding points” by bashing some rats away from your downed mate, or by killing or bashing some foe which was just about to strike one of your mates.
The aid was furthermore signaled in the same way that special/elite kills were advertised. I think something like that could really boost the willingness of people to do something more team-related.
Basically, you play on the “badge reward” side to try and subliminally insert team-play on refractory brains

Current stats has throwaway irrelevant info mostly. Just skip it and get on with your life. It needed a deep rework since day 1.