Does anyone understand the word vomit that is the Raging Bull perk?

I have no idea how the hell that bastardization of english got approved, I’ve tried my hardest but the way it is worded is just painful and makes no damn sense. 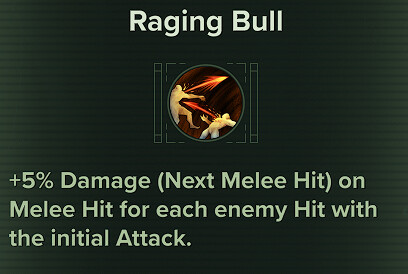 for each enemy you hit with your first attack, you get +5% dmg on the nexxt attack

Your next melee attack gets all those +5% damage stacks applied to it. Assumedly only the first thing you hit gets the damage buff, based on the wording.

What I’m curious about is:

Playing around with this in the meat grinder. We do not appear to get an icon for Raging Bull stacks (so it’s impossible to tell how many we can stack up).

Also, based on damage numbers, this feat doesn’t actually seem to work. I do the same damage to individual targets regardless of how many enemies I hit with the previous attack. Maybe I’m reading the feat description wrong?

Yeah, I haven’t noticed an effect either in my tests.

I mean sadly we don’t get stacks for ANYTHING, but yeah testing shows no real change that I can see, wonder if it’s bugged in the psyk, and if so, then just what in the hell is the point of the psyk if we can’t actually TEST stuff in it.

@Tzcheese
How many stacks can I have?
I don’t believe their is a hard limit set, but how many monsters you can cleave is based on the monster mass, which gets subtracted cleave from each foe you hit. This might also be set to 5, but I’m rather certain I can push all the monsters in to tiny group and hit nearly every single one of them in on go.

How long do the stacks last?
It’s a charge/discharge cycle, so once charged the first enemy hit, will receive the increased damage.

Raging bull has been reported a few times already for not working and it has never been acknowledged/confirmed as being broken.

I’ve used it on varies occasion and on the battlefield, got the impressions it did indeed work and this becomes noticeable when you have high cleave weapons, amplifying the damage on the next (first) enemy hit. High cleave weapons for the Ogryn are more staggering and less raw damage, it’s on these crowd control weapon I got the impression (or false illusion) that I was actually killing more often than keeping them staggered in place.