Crushers should be carapace and flack

Crushers are great enemies and not really that bad but the main problem I got with them is that by just existing you can’t run certain weapons like heavy sword, devil claw and most ogryn weapons.
And sure you can deal with them but a lot of the time you just end up leaving them to a dedicated anti armor weapon user.

Just make the legs or arms flak armor or both so we can chip away at them but they are still mainly carapace and immune to normal weapons if you can’t aim.
Like a reverse mauler.

Well I do use a whole lot of chain weapons and anti armor axes or can just bleed them.
But the fact I won’t run heavy sword and devil claw since they can’t deal with them at all just means won’t ever use them.

I’d be in favor of making their head flag armor. Looking at all those midget players jumping to reach it… glorious.

I am assuming you are talking about Damnation difficulty.
Well you don’t have to be equipped for everything, that is why you have a 4 man squad. You also have both ranged and melee weapons to chose from.
You can run any melee for horde clear and bolter for Crushers. Of course it would be good to have 1 or 2 members of the squad to run anti-carapace.
Whether it is ranged or melee does not matter much but it is basically 2 out of 8 weapon slots on your team. Ogryn “box of nades” is also great agains these guys.
Maybe let us know what classes are you playing and we can share ideas.
With little context given I am leaning towards @Gatss opinion.

how about right foot armor is flak and give us a bow !!

this is warhammer 40k xd

Maybe give him some metal assless chaps.

Well of course, I still need a bow for the Achilles reference, if Crushers would have flak on a foot

Yeah, I don’t really see the big issue here. If a Crusher pops out, odds are that out of the 4 people present, at least 1 will have the weapon capable of dealing with the Crushers, and at least you will always have someone if a Veteran is present since the PS goes clean through the bugger. 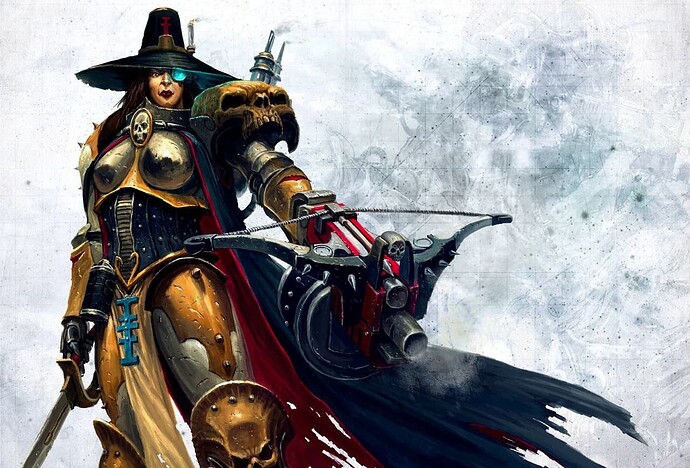 The issue is that enemies dictating delegating all possible forms of interaction to Weapon Choice instead of skill are boring.
Chaos Warriors in VT2 are better designed in that you do better damage to them with AP weapons, but headshotting always allows you to deal at least some damage to them. They are also tall and their heads small, which means in a lot of instances you jump to reliably hit their head, which leaves you vulnerable.
→ bring either AP weapon or be skilled enough to headshot and fight battle of attrition

Crushers are more like
→ bring AP or p*ss off

Fair enough, though my loadout has never changed between the two games, I always took with me weapon that dealt with hordes and a weapon that deals with armour, and that hasn’t changed here. I like to be able to rely on myself in a pinch. I only really shift my stuff around when I am with a pre-made to pull out the more specialised stuff.

I do agree though that they could have a bit more weakpoints to aim at, probably feet and joints if something. There really is no equal to them in VT since the Mauler is the Chaos Warrior in this one, they even use the same animations as the buggers. Either that or the game could stop being so damn generous with how many it throws at you at once.

The Mauler in Darktide is really the Mauler from VT2 in principle as they both wear stronger armor on their head compared to the rest of their body.

The issue is that enemies dictating delegating all possible forms of interaction to Weapon Choice instead of skill are boring.

As much as I agree with that statement, I must admit that I always saw Tides as something a tad different. For me it is your Role in the team that defines both your playstyle and interactions.
Role is a combination of class/subclass and weapons imho.
I fully understand that when we play pubs, we tend to try to be versatile, swiss army knife if possible, casue we do not know what randoms will bring, expecially on H+.
It does not seem to be an issue with a group of pals or if you use comms to set up for a run. Of course join match in progress excluded.

For me it is your Role in the team that defines both your playstyle and interactions.
Role is a combination of class/subclass and weapons imho

True and that was also the case in VT2, so I am not sure why you put this in your response.
Example:
I can play Handmaiden with Greatsword in VT2 and still deal with armored elites through hitting headshots even though it is primarily a horde clearing weapon.
Is the damage pretty bad all things considered? Yes.
Is a CW head really hard to hit? Yes.
Can I still do damage and interact with them even if it affords skill? Yes.
If I have a GK, Slayer, WHC on my team, is my role to kill elites? No, cause they are ifinitely better.
Can I still contribute? Yes.
Like I am not asking for a lot here and I believe the example above illustrates that very well.

thats not a bow lmao

You wrote that “all possible forms of interaction” are delgated to weapon choice, in case of Crusher.
That is the part I disagree on, you still have roles to play, if you are not set up to deal with a crusher, let someone else deal with it, you don’t have to be set to be its killer. As you wrote yourself.
Furthermore, imho we have higher variety between melee and ranged weapon capabilities than we had in VT. I never felt constrained by my weapons in DT.
I do not mind your idea, if it makes it better for most of the community, more power to the ppl.
Personally though I find Crusher as one of these enemies that are both well made as a challenge and require a bit of variety in squad build.

You disagreeing doesn’t make sense though and my point about interaction being hard limited by weapon selection also still stands.
If I bring two weapons with me that do not have any form of ap there is no way for me to interact with a crusher as he has no meaningful “weakspot” to skillfully aim at. You either have ap or you don’t.
I don’t get what’s there to disagree with.

Simple, that is false.
You have abilities, traits, granades, every weapons does something, either little damage, stagger etc. Even blocking/pushing and dodging factors in. You do not need AP to have effect on enemies. It is required to kill them fast, very singular interaction.