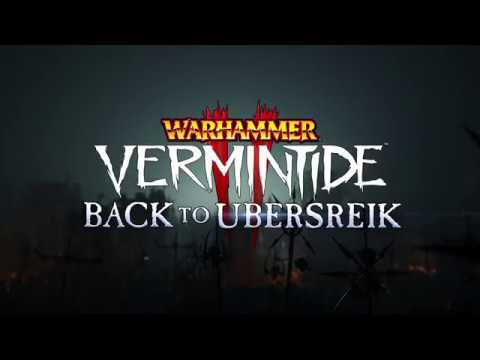 Heroes, welcome Back to Ubersreik!

Our second DLC brings with it version update #9, which includes plenty of bug fixes and tweaks, three new missions and five new weapons for players who own “Back to Ubersreik”.

Our DLC policy for Vermintide 1 is something that we are very proud of. Players who owned a DLC, could invite their friends along for the ride - not everyone in the party had to be owners. We felt that was a fair deal. But for Vermintide 2, when we released our first DLC “Shadows over Bögenhafen”, we received feedback from our players that, because of how Quickplay works, the value proposition of our DLCs wasn’t all that clear. So for this release, we’re changing how access to DLC missions works.

From now on, in order to host a Custom game with a DLC mission, or have that mission be selected for Quickplay - you, or another player in your Keep, will have to own that DLC. Where it was previously possible to join a DLC mission through Quickplay, even if you didn’t own that DLC, from today that won’t be the case. You will have to join a friend who owns it. These changes also affect the missions from the Shadows over Bögenhafen DLC. We’re in the process of making more finely grained options for random mission selection in Quickplay. In the next major update, planned for January, we will present players the option of playing only certain sets of missions - excluding, or including DLC levels.

The second DLC of Warhammer: Vermintide 2 brings us right back to where it all began - Ubersreik. After discovering a mysterious object Olesya sends the heroes back to Ubersreik to bring light to the object and to discover its connection to the past.

We are currently working on Update 10 which solves a selection of audio issues, common crashes and an issue found in the matchmaking system. We hope to have that out to you in the very near future.

Still buggy as hell. On Horn of Magnus, the oil jug explodes and burn like it’s supposed to, but the burning sound lingers for the entire game.