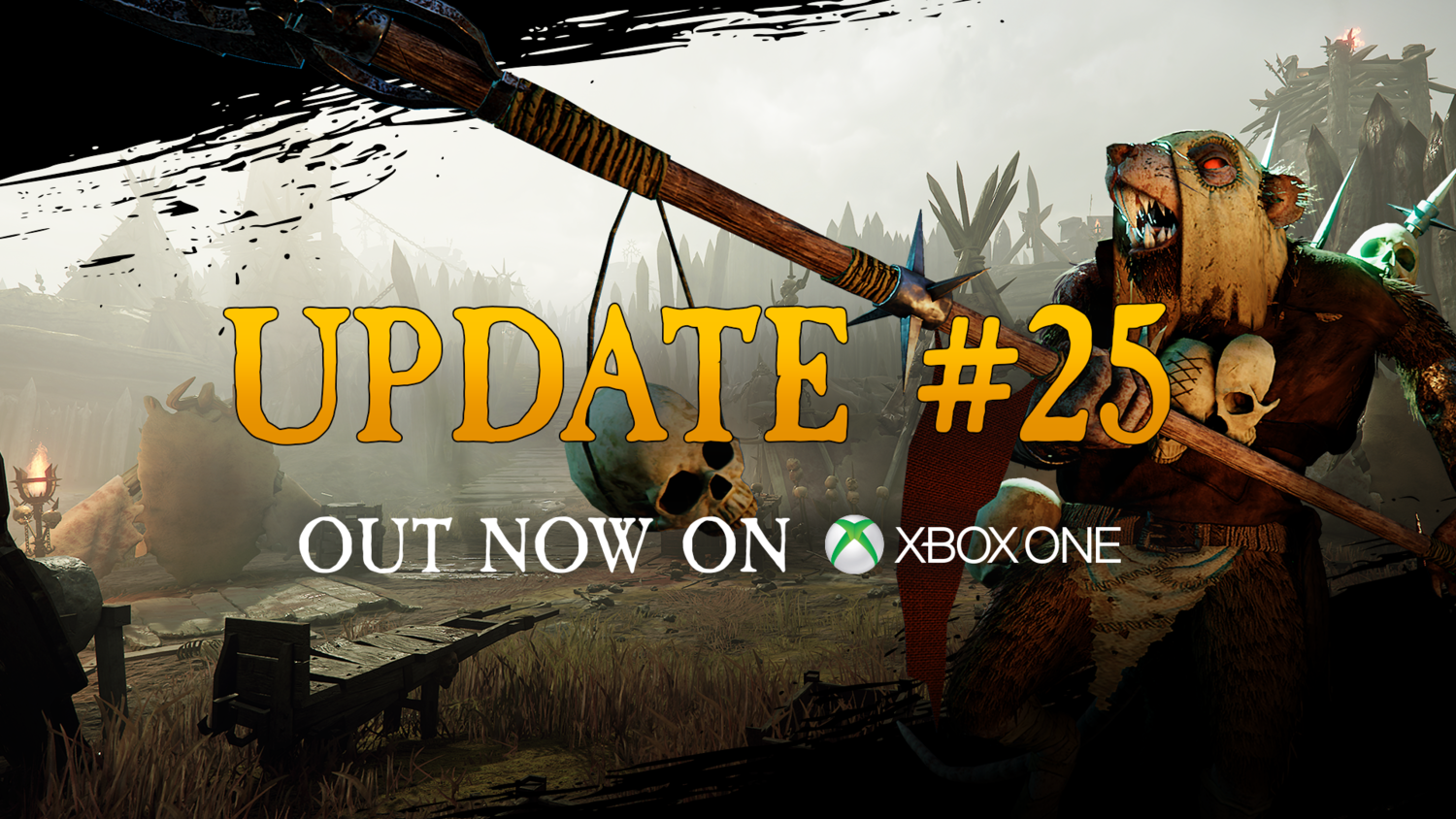 Welcome to Update #25 on Xbox One! This update contains Weather Variations, more Shilling Cosmetics, three new Wind’s Mutators to Twitch Mode, and of course, the new career for Markus, the Grail Knight! With this update, a new Weave order is in place, and the earlier rewards are no longer available.

The download size of the patch is larger as this update will decrease disk space footprint.

You will be able to find the Grail Knight in Lohner’s Emporium of Wonders and the Microsoft store. On consoles, the Grail Knight will be available as a complete package only. Due to the differences in how the store front on PC is compared to the console stores, it has not been possible to split the content into two tiers as was achieved on Steam.

The full patch notes for all the fixes, tweaks, and balance changes in this update can be found at the bottom fo this page, as well as an FAQ.

We understand that there are also many waiting for this update for PlayStation 4. It is coming! At the moment it is going through testing and will be released as soon as possible.

The Grail Knight will be available in the Microsoft Store and in Lohner’s Emporium of Wonders.

Q: Can I turn off the Weather Variations?

A: At the moment you cannot turn off the Weather Variations.

Q: Does the different Weathers effect my gameplay?

A: The Weather Variations have no effect on the gameplay.

Q: Will there be more cosmetics coming to Lohner’s Emporium of Wonders?

A: Yes, in the future! For now we have added a bunch more Shilling Cosmetics and new Premium Cosmetics with Update 25.

Q: How do I get the Grail Knight?
A: The Grail Knight is available in the in-game store called Lohner’s Emporium of Wonders or can be found in the Microsoft Store.

Q: Can I use the longsword and the sword & shield on other Kruber careers?
A: The Sword & Shield are exlusive to the Grail Knight. The Longsword can be equipped on other careers that can use a longsword.

Q: How does the Grail Knight special attack work?
A: Similar to how Bounty Hunters or Waystalkers Abilities work currently. Pressing LB causes Markus to manifest a Blessed Blade of the Lady of the Lake. The attack can be held indefinitely, or released instantly for a devastating attack. It can be canceled by pressing block while it’s being held.

Q: Why are you releasing just one career instead of multiple?
A: We wanted to release the first career as soon as possible and not hold the content back from the players. Go and enjoy it!

Q: What other weapons can I use for my Grail Knight?
A: The Grail Knight can use all of Markus Krubers melee weapons other than the Halberd and the Tuskgor spear, for they are weapons of the Peasantry and unfit for a gallant Knight of Bretonnia.

So…when can we purchase grail knight? @Fatshark_Hedge @FatsharkJulia will it be ANOTHER few months before the main feature of the entire update is available to us. Because it can’t be purchased right now

Glad I’m not the only person with this issue. It keeps telling me that I need to download Winds of Magic, which I bought and installed as soon as it came out, just like all the other DLC (not counting cosmetics).

It is available now. Just downloaded it.

It won’t let me purchase the grail knight . Says it’s price is unavailable or in the store only option is redeem a code

@jacob_crowley908 @Highking_Ragnar at the top of the forum page there is a disclaimer saying there are currently some issues regarding the xbox1 patch, i’m sure they will be resolved asap.

Which region are you playing from?

There’s a typo in the instructions for the Grail Knight special ability in the Q and A section. I don’t think Xbox players can press F to activate the ability as there is no F on the Xbox controller.

Thank you for notifying us! The typo has been corrected.

They can also not press Q to quickswitch.

but this fix should force a ‘reload’ next frame so QQ shouldn’t be needed to restock.

. I don’t know to ride this here but I’ll say it fast, when we play as Group on the Weaths ( we musst only do till Weaths 80 then we happy ) everytime when we play it the Weaths this Mode Freeze the Console and kick us all in the Dashbord back and this so many times and we stuck now on Weath 26 and we can’t reach the Target for this Level and we try everything what we can, so pls when anyone knows everything or when comes out a Fix to Patch this Mode without Gamecrashes and Frezzes pls Tag me on, thanks for you’re time and I hope I get some good news

And we are play on the Xbon One and try everything to get play this Mode. ( We try also to start this DLC with the 1st Xbox One, Xbox One S and Xbox One X and the Xbox One X is it to much Gamecrushes the Best Result was with the 1st Xbox but we need a Patch of this Mode without Gamecrashes and Frezzes )

Hi, what kind of weave is it ? If it’s a lightning one than its the effects causing the issue. The way we found around it was to have the host or just one player go through first. If it’s not a lightning map it may just be a mob flood causing the xbox to crash.

has anyone seen weather variations?

I had some rain in a couple games.