If you get a little serious about completing Heresy+ runs, it becomes quickly apparent that many weapons are not just suboptimal, they are an actual hinderance to yourself or the team.

We’re quite a far cry away from VT2’s weapon balance, which isn’t perfect, but I’ve still managed to make every single weapon work on Legend there.

If I could direct some of the weapon designers’ attention to this video for example, which IMO summarizes a lot of problems with the weapon design. Some of these issues are a direct result of almost every weapon type having several ‘Marks’ or variants, with some that are clearly superior to others.

Overall, it stinks of “quantity over quality”. 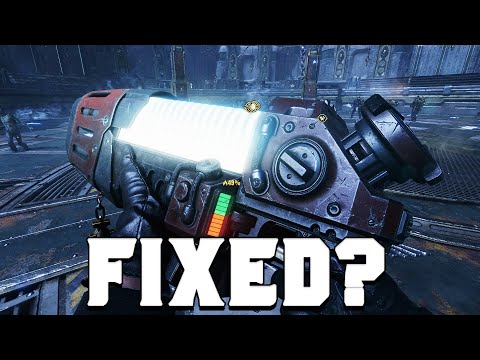 The weapon balance is defo something which will be looked into. There those weapons which are fine as they are, few which are the obvious “go to choice” (power sword) and few which make sense only with specific damage breakpoints and blessings (for example: plasma and heavy sword)

Why would you as a veteran use any other meleee weapon than the power sword? Especially outside the Damnation bubble (and tbh it still performs fine there).

So many weapons need a good buff that it’s at the point of false choice in terms of the weapons with not playing the meta as a hindrance, and rightfully so you’ll hear “just read a guide, lol” from people.

IMO after several hundred hours of veteran I can confidently say that power sword isn’t OP, it just feels OP when placed next to the rest of the armoury who are very underpowered. Weapons that cannot deal armour damage AND some amount of stagger cleave just cannot complete on high difficulties.

The Rashad axe is a great example of this. It hits hard, but it has a bug where the axe phases through heads and hits the chest instead. It also has next to no cleave so you can only hit one enemy at a time. Facing more than 2-3 melee enemies at once is very difficult because whenever you swing the axe you stagger or kill one target leaving the other 5+ free to move in and attack. This forces you to crowd control exclusively with push (which you can’t do forever because it costs stam) and give ground by dodging backwards between attacks.

The catachan sword and shovel end up being far superior simply because you can actually hit and stagger 2-3 enemies at the same time. That combined with the higher attack speed lets you survive indefinitely versus the most common threat (hordes). But the same weapons utterly fail when faced with a crusher because they just tickle for 40-50 damage even on heavy hits.

Vermintide had this exact same problem on launch, it had weapons like maceshield which could handle hordes but did not have a good anti-armour attack at all. Modern vermintide weapon balance is much better because now there are better and worse anti-armour option, but even the WORST weapon can still handle storm vermin and chaos warriors through player skill, headshots, critical hits and choosing the right hit combo.

Darktide weapons feel like prototypes because they have no real identity and were rushed out to meet deadlines. There’s nothing at all like say, kruber’s halberd that can stab, chop and smite in practically any combination depending on how the player handles it. Most darktide weapons are lucky to have a single combo and it is almost always a braindead alternating light-heavy chain.

IMO after several hundred hours of veteran I can confidently say that power sword isn’t OP, it just feels OP when placed next to the rest of the armoury who are very underpowered.

I dunno about that. I just switched to my veteran (lv12) to continue leveling him after about 100 hours of both Psyker and Zealot at lv30. I unlocked the Power sword at lv13 and replaced my Combat Knife with a 200 score Power Sword.

Lemme tell ya : it alone made my Vet just as good a melee fighter, or even better, than my Zealot with Combat Knife Bleed build (which is known to be almost indestructible in melee). The combination of the Vet’s 200 toughness and the unlimited cleave of charged attacks is just a lot.

It makes it so that even if you get hit occasionally, you generate so much Toughness with a single Heavy charged swing into Poxwalkers or even flak armor, you just never lose any HP in melee. And activating the charge while in close combat, for VT2 veterans like me, is trivial.

I’m not saying the Power Sword should be nerfed into the ground ; but buffing everything else to its level would trivialize even further anything that’s not a gunner or Carapace-armored.

I’m also pretty sure it carries some Veterans who don’t really care to learn how to melee effectively. That’s not very good for them in the long run.