Thoughts on the cosmetics?

For the costs I was hoping for more than just, at least on Ogryn, more than a literal palette swap or color shift on the shirt. At least what was in my shop all day was just garbage, the only things worth a damn are the weapon cosmetics and it seems mostly the melee weapon ones as they seem to alter the weapon slightly, at least in the case of the slab shield the maul actually changed.

Can only hope that there is more variety hidden away.

Not a fan. I usually greatly enjoy cosmetics variations.
What we have with that first iteration is basic palette swaps indeed. Some motifs but really nothing even slightly elaborate.
Probably by design to make the other “tiers” gradually more attracting?
It might also be a production choice as it’s easier to create many textures (and possibly materials) for so many variants (clothes/weapons) while other artists are working on more elaborate cosmetics (mtx or from the penances).

FS artists have shown great creativity and serious skills for Vermintide 2 heroes. So I can’t see why we wouldn’t get much better cosmetics later on.

At least, now, we have different colors.

I mean we probably will get some good looking stuff, for real money.

Probably yes. And based on the wide range of options, it should be interesting

Not clothing, but that skin for the boltgun does not only change the color but it’s also an alternative appearance (aquila, different magazine, and other details).
Pretty cool! 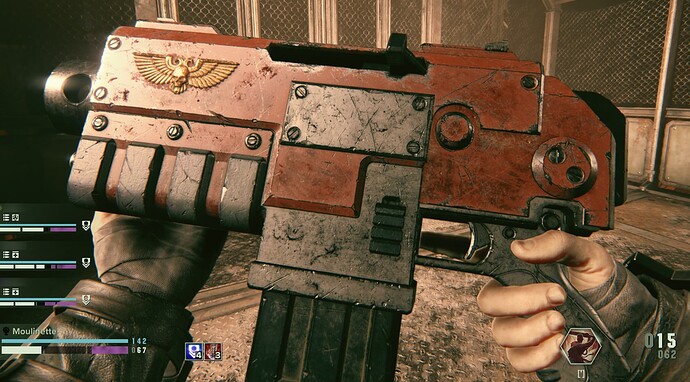 I would greatly appreciate being able to just buy paint for my cosmetics and color it myself, it would have been more modular and kit-bashy.

They could have numerous different paint tints that fit the theme they’re going for. Would have been a lot nicer than what we have now, i wanted a certain color for my psyker clothes but they don’t have a lot of options.

This is only a pre release beta.

I quite like the cosmetics you earn from penances, the re-colours in the store are not really anything special, but at least the option is there for free, I would assume the better-looking skins will be part of the in-game microtransaction store on release. But I hope they also keep adding good looking skins that can be earned through gameplay.

It’s the minimum effort of what constitutes for “different cosmetics”.
Awful.